'They're not taking it seriously': Under-reporting of student violence persists

Despite an Ontario law enacted eight years ago that makes it mandatory for school boards to report violent incidents to the education ministry, CBC found many assaults are not being recorded.

Reporting violence not mandatory for public schools in half the country, CBC finds

The attack lasted only seconds, but Taza DeLuna told his mom it marks the moment when "his childhood died."

Two weeks after starting high school at Collingwood Collegiate Institute, about 150 km north of Toronto, in 2017, the 14-year-old was attacked in a hallway by two students while another stood by filming with a phone.

In the grainy video, which is still viewable online, a student punches DeLuna in the head and kicks him before another teenager pushes him away.

"I blacked out for a couple seconds, and there was blood coming out of my head,'' recalled DeLuna.

He said a group of boys started calling him names, and when he tried to walk away, "they just kept following me until they just sort of picked me up and hit my head off the door frame."

DeLuna eventually made his way to the principal's office, only to find one of his attackers already there.

WATCH | 'I blacked out': Taza DeLuna, 14, describes being attacked at school: 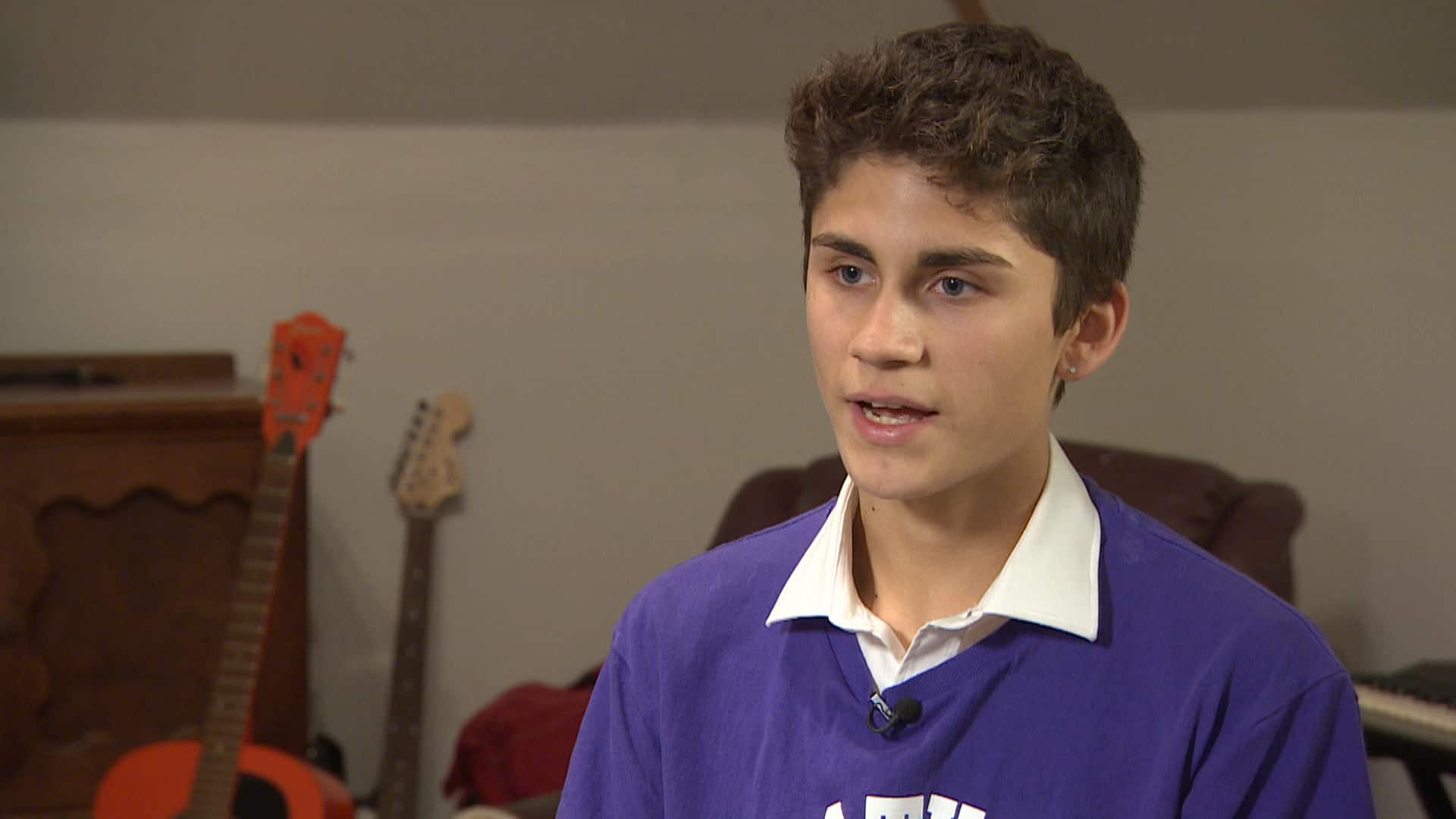 1 year agoVideo
0:23
Taza DeLuna was violently attacked during the second week of school at Collingwood Collegiate Institute in 2017. 0:23

"The vice principal just told me to wash the blood off of my head," said DeLuna, "which was probably one of the least-comforting things that you could say to somebody who's bleeding, concussed and really scared."

DeLuna's mother eventually took her son to the hospital, where he got staples to close his head wound.

"He had split the back of his scalp open," said Tai DeLuna. "He had bruises along his rib cage on both sides and along his back from being jumped on."

'They're not taking it seriously'

Despite an Ontario law enacted eight years ago that makes it mandatory for school boards to report incidents such as this to the Education Ministry, CBC found the assault on DeLuna was not recorded.

"All [their] anti-bullying rhetoric is just that — rhetoric," said Tai DeLuna  of the fact that the attack on her son wasn't reported.

Simcoe County District School Board is not the only board that failed to accurately report violent incidents to the government. CBC's analysis of the ministry's official school violence statistics found at least one-third of school boards in the province have important gaps or inconsistencies in the figures they have been submitting electronically to the ministry since 2011.

"It tells me that they're not taking it seriously," said Tracy Vaillancourt, Canada Research Chair in Children's Mental Health and Violence Prevention at the University of Ottawa. "This problem that they are pretending doesn't exist will continue and will likely get worse."

Ontario was compelled to address school safety after the death of Jordan Manners, a 16-year-old who was gunned down in his Toronto high school in May 2007.

When CBC looked at those figures broken down by board and school, it found a lot of unusual patterns.

"The under-reporting stands out to me," said Vaillancourt after reviewing CBC's findings.

"It's striking how so many of the columns have zeroes, and that doesn't make sense when I think about all the national surveys, and even smaller, local surveys from my colleagues in Canada."

Gaps in the data

Among the most notable inconsistencies CBC found were figures submitted by the Hamilton-Wentworth District School Board. One of the schools it oversees is Sir Winston Churchill Secondary School, where a 14-year-old student was stabbed to death earlier this month.

Ministry figures show Hamilton-Wentworth — which oversees 143 schools and had close to 50,000 students enrolled last school year — reported zero incidents between 2014 and 2017. Yet when CBC asked for more information, the school board provided details of 51 violent incidents it tracked during those years, including three at Sir Winston Churchill.

CBC also found half a dozen cases of violent beatings, stabbings or students carrying weapons widely covered by media that were never reported to the ministry by the schools involved, according to government figures we obtained.

The cases include eight teenage girls arrested in 2015 for physical, emotional and cyber bullying who were subsequently charged with criminal harassment. The official figures also show that a school named in a stabbing involving two students on a school bus reported zero violent incidents to the ministry the year of the attack.

John Dance, the associate director for the Simcoe County District School Board, told CBC that the fact that Taza DeLuna's assault was not recorded was a "clerical error," which only came to the administrator's attention after CBC pointed it out.

The board said Collingwood Collegiate Institute "had completed all required tasks in reporting and following up the incident," and the mistake was made later.

In fact, Dance told CBC there had been three incidents that year, including the assault on DeLuna — and not the zero that ministry figures show. The next day, the school board corrected itself again and said there had been just one incident at Collingwood Collegiate that year, not three.

The board has since found 13 unreported incidents and said steps were taken to "incorporate an audit process."

The minister was unavailable for an interview, but in a statement to CBC, the ministry said it reviews the figures submitted by school boards every year, flags any questionable data and raises it with the relevant board.

"It is clearly unacceptable for boards not to report violent behaviour, and we expect every school board in the province to comply [with the policy]," wrote ministry spokesperson Alexandra Adamo.

She explained that boards are given an opportunity to update or revise and resubmit their data if necessary. Some of Hamilton-Wentworth District School Board's figures were reviewed and changed recently as part of that process.

But a memo addressed to all directors of education and obtained by CBC suggests that concerns about inconsistencies in the violence statistics have been raised for years — even by the ministry itself. Yet reporting problems seem to persist.

In 2016, five years after the ministry made it mandatory for school boards to submit annual tallies of violent incidents, government officials contacted several school boards to discuss "higher than the norm" figures and were asking everyone to review their numbers.

"It is important that we work together to ensure accurate data and clarify collection guidelines," read the memo.

Despite its inconsistencies, Ontario has one of the few mandatory reporting systems in Canada.

CBC asked every ministry and department of education across the country how they defined and tracked peer-on-peer violence in schools, whether that reporting was mandatory and what accountability was in place to analyze and verify these statistics.

Half of the provinces and territories clearly defined violence in a school context and told CBC it was mandatory for schools to report violent behaviour. But besides Ontario, only three Canadian provinces or territories collect and share their school violence statistics with their ministry: Nova Scotia, Nunavut and Yukon.

"That's not a real system for the country," said Ron Avi Astor, a professor at the University of California Los Angeles who has published more than 200 academic studies on violent behaviour in schools.

"Many countries have gone back and forth on whether it should be voluntary or mandatory, and what we see is in the places where it's not mandatory … they tend not to do it."

Astor said administrators are often afraid of being singled out for having a reputation as a "violent school" if their numbers are high or rising.

"Once that's public, principals and superintendents and regional officers may be shamed. In countries where there is a tendency both by the media and by politicians to shame the schools, you see an underreporting — or you see no reporting."

"If you can't trust the data and you have zeroes on there, you really can't allocate resources — not just money, but social workers, psychologists and counsellors."

'We all want a sense of justice'

Two years after being attacked, Taza DeLuna says, little has changed. He still attends Collingwood Collegiate, with some of the same students who punched and kicked him until he bled. His mother said the bullying hasn't stopped.

"If you went to work and were attacked by one of your colleagues and put in hospital, you'd expect that within a couple of days, you wouldn't have to sit by that colleague and work with them," she said.

"That's exactly what the school expects of Taza to this day."

Taza himself said the attack leaves him constantly worried.

"I don't think I've ever gotten back from that anxiety," said DeLuna. "I'm sort of dreading school every day now. I just really don't enjoy it. And it's not making it any easier for my … academics there, either."

UCLA's Astor said that often, the most enduring scar for victims of school violence is a profound sense of injustice and a feeling that they don't matter.

"We all want a sense of justice," he said. "Schools should be no different. When kids see that the teachers do respond properly, I think it changes their whole sense of trust in society as a whole."

Send us your feedback and stories: schoolviolence@cbc.ca.