The controversy over what to do with statues of Sir John A. Macdonald in Canada prompted CBC's The National to dispatch Nick Purdon and Leonardo to Regina and Kingston to ask: 'To remove or not to remove.'

What are we really arguing about when we argue about Sir John?

The ongoing controversy over what to do with statues of Sir John A. Macdonald in Canada prompted CBC's The National to dispatch Nick Purdon and Leonardo Palleja to Regina, Sask., and Kingston, Ont., to ask: "To remove or not to remove?"

Standing beside his minivan as Regina's afternoon traffic rushes past, David Garneau puts on an oversized three-piece suit that he spray-painted gold. Once dressed, he looks like a cross between a scarecrow and an Elvis impersonator.

Then he covers his head with a black hood and hangs a noose around his neck.

Moments later, Garneau walks off through the park to confront a statue of Sir John A. Macdonald — Canada's first prime minister.

Garneau, a Métis artist and professor at the University of Regina, says he dresses up as the ghost of Louis Riel — the Metis leader who founded Manitoba and clashed with Macdonald in the 1880s — because he sees the statue as a deliberate provocation.

Erected in Victoria Park in 1967, the statue is just steps away from where Riel was tried for treason and hanged in 1885 for resisting Canadian encroachment into Métis lands.

Garneau says the threat is deeply personal, because his great-great-grandfather Laurent Garneau took part in the Métis resistance.

"He was arrested and put in jail for six months and threatened with hanging," Garneau says.

"So I grew up with the idea that that's a possibility. It led to what I call the great silence, when Métis people just went underground and assimilated. My family assimilated — just went quiet."

For years things were pretty quiet for Sir John A. Macdonald, too.

For example, during the Canada 150 celebrations in 2015 an Ipsos poll showed that a quarter of Canadians couldn't even name the country's first prime minister.

But since then Macdonald's legacy has come under increasing scrutiny — particularly his role as the architect of Canada's Indian residential school system, where thousands of Indigenous children died and many others were abused. 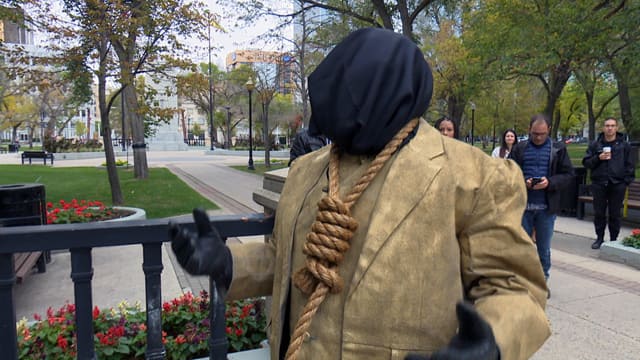 2 years agoVideo
0:40
David Garneau, dressed as the ghost of Louis Riel, talks to Sir John A. Macdonald's statue in Victoria Park, Regina, as part of a demonstration against Macdonald's legacy. 0:40

In Kingston, Ont., where Macdonald grew up after he and his family emigrated from Scotland, the former PM holds a place of honour.

His statue in City Park is perhaps the most impressive in the country.

Until recently, a crowd gathered around it every year on his birthday and drank a toast to the former prime minister.

Warren Everett, the head of the Kingston historical society, made every gathering he could. When asked if he'd like to meet Macdonald, his face lights up.

"Oh yeah! I would love to have a drink with him," Everett says. "He is the Father of Confederation, and it was his drive and ambition and vigorous approach that stopped us being a colony. I am not sure where we would be if it hadn't been for him."

And while Everett understands that Macdonald's policies toward Indigenous people had serious problems, he points out it wasn't just Macdonald.

"He shouldn't be the lightning rod, because if he is, so is Laurier, so is Borden, so is Bennett — everybody up to Pearson. They may not have started it, but they certainly didn't stop it."

Everett's worry is that if the Macdonald statues go, where does it end?

"You could have a growth industry in wrecking," he says. "I think if this statue came down, you start to erode the legacy and history of the country. I think it would leave a big hole in Canadian history if taken down."

Death threats at the local pub

Sir John A. Macdonald has always been important to the economy in Kingston as a driver of tourism, but that relationship is more difficult today.

For example, the city is currently asking residents to voice their thoughts about the changing legacy of Sir John A. Macdonald and how the city should address it it.

And then there's what happened down at the pub.

Then on Labour Day weekend in 2017, a group of protestors gathered outside the pub and yelled at customers as they went in and out.

Fortier says they accused patrons of supporting "a colonial business."

"They had Sir John A. hanging on a stick with a noose around his neck," Fortier says. "They didn't burn it here, but they took it to the park and set it on fire."

Even though Fortier considers himself a fan of Macdonald, he listened to the protestors and decided to change the name of his pub. He dropped Macdonald and rebranded the bar as simply The Public House.

That wasn't the end of it. After the name change, Macdonald's supporters were angry.

"People were coming into the pub and saying that we shouldn't have done this, that we have caved to the liberal-minded individuals," Fortier says.

"There were some very hurtful messages and death threats left on the answering machine."

How is it that some Canadians are so passionate about Sir John A. Macdonald that they'll burn effigies of the prime minister or leave death threats on a person's answering machine?

Patrick Johnson, a musician from Vibank, Sask., faces a mischief charge for spraying red paint on the statue of Macdonald in Regina's Victoria Park.

Johnson admitted he committed the act, but he refused to plead guilty because he doesn't believe what he did was wrong.

While Johnson's case will be settled by a mediator, it isn't the first time he's vandalized the statue.

But to Johnson's amazement — and disappointment — nothing happened except the statue made a noise like a giant bell ringing.

"It was frustrating," he admits, "but it was also eye-opening that it would take more than me to change something, if you will. As if this were a metaphor for something else — one person couldn't do it by themselves."

Johnson explains that he's compelled to damage the statue because he doesn't like the way Indigenous people are treated today.

"For me, it is appalling that we celebrate our country Canada as being civilized, and yet we let a certain portion of our people live in poverty without clean drinking water, without adequate housing and education."

At that moment, a man named Gordon Blackmore was riding by on his bicycle. He recognized Johnson and shouted at him for being a vandal. Here's what happened next: 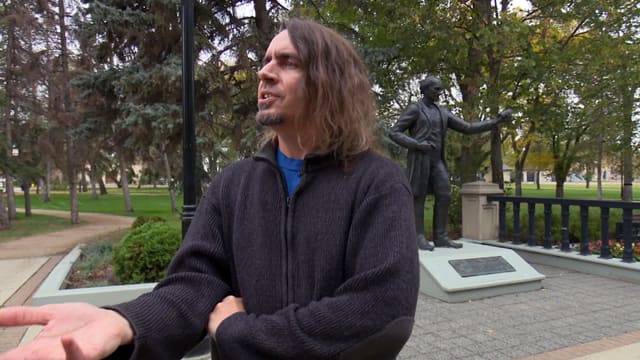 2 years agoVideo
0:42
Patrick Johnson argues with Gordon Blackmore about the statue of Sir John A MacDonald in Victoria Park, Regina. 0:42

What are we really arguing about?

After doing 30 years of research into the relationship between Indigenous people and Canada, Jim Daschuk, an associate professor at the University of Regina, thinks he knows exactly what we're arguing about.

"For the defenders of the Macdonald commemorations across the country, the discussion about Macdonald's legacy challenges their identity," says Daschul. "They want to keep them up, because they want their representation of Canada to survive."

Daschuk says the debate has shocked many people across the country.

"Canadians have a high opinion of themselves, we think of ourselves as decent people, and in many ways we haven't had a decent relationship with our Indigenous population. So when we find out about it, it's a shock, it punishes our identity."

Daschuk says there's no doubt that Macdonald was the father of Canada, but points out it's not that simple.

"He also the father of the dysfunctional country we live in today. His policies have a direct reverberation into the present."

And Daschuk has a warning for all Canadians about the possibility of reconciliation with Indigenous people.

"If we can't have a discussion about the statues, about the legacies of Macdonald's policies," Daschuk says, "we are not ready to deal with justice issues and transfer of land, wealth and education, health — those things are real and they need to be addressed."

Daschuk's point is that it is tempting to dismiss the conflict over the statues as being about the past, but he insists it's really more about the future of the nation. 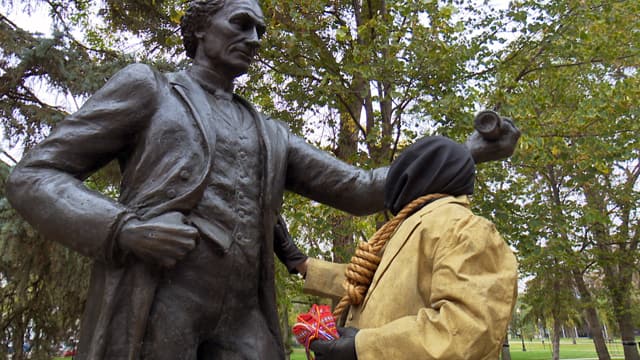 2 years agoVideo
1:48
David Garneau, a Métis artist and professor at the University of Regina, dresses as Louis Riel and lectures the statue of Sir John A. Macdonald in Regina's Victoria Park about why simply erecting a Riel statue nearby won't stop the public debate over Macdonald's monument. 1:48

Watch Nick Purdon's feature on the Sir John A. Macdonald controversy from The National