As far back as 2011, thousands of children across Canada have been riding school buses with a critical safety defect that puts them at an “increased risk of injury” if there is an accident or sudden stop, according to an industry document obtained by CBC’s The Fifth Estate.

Vehicles allowed to remain in service despite not meeting safety requirements

As far back as 2011, thousands of children across Canada have been riding school buses with a critical safety defect that puts them at an "increased risk of injury" if there is an accident or sudden stop, according to an industry document obtained by CBC's The Fifth Estate.

Yet, even after Transport Canada was told of the problem this summer, the buses with the defect remain in service and transport passengers to school.

The internal document leaked to The Fifth Estate is titled "Important Safety Recall Notice" and identifies a safety risk associated with seats on more than 200 school minibuses manufactured between 2011 and 2018.

The leaked document is the latest development in a months-long Fifth Estate investigation into Transport Canada, bus safety and why the federal government has for decades adopted a no-seatbelt policy.

The research reveals a pattern of secrecy within the federal regulatory department about what it knew about how seatbelts prevent injuries and save lives.

Transport Canada quietly issued a recall notice for more than two hundred buses in July after learning that the padded foam on seat backs it said was in place to protect students in a collision or a sudden stop was "insufficient" on some buses and "could increase risk of injury in a crash."

The warning was sent to bus operators across Canada in September and disclosed that the bus manufacturer had still not come up with a "remedy" to fix the safety defect.

Staying on the road

Despite there being no immediate solution to fix the safety risk, the executive wrote: "Your buses can be kept in service in the meantime."

Transport Canada's website shows 269 buses are included in the recall. Each bus has a seating capacity of approximately 30 students. Transport Canada's statistics initially stated 1,010 buses had the safety flaw, but the number was changed in the database after Fifth Estate journalists began asking questions.

Still, over the past seven years, this means that thousands of unsuspecting students have been riding on those buses with the safety defect.

"I can't understand why do we expose children and occupants to greater risk," Ahmed Shalaby, a University of Manitoba engineering professor and road safety expert, said after being shown a copy of the leaked document. "These kids, they are unaware and their parents are unaware."

A company employee told The Fifth Estate last week that a remedy was recently found to correct the injury risk, but so far, none of the Micro Bird minibuses affected by the July recall have been fixed. That will take place in the near future, the employee said.

The leaked document reveals that the specific flaw relates to inadequate padding in the bottom half of the back of the school bus seat.

For decades, Transport Canada had publicly claimed the padding in school bus seats is better protection for students than seatbelts.

"There is an increased risk of injury to unbelted seat occupants in a vehicle hard-braking situation or vehicle crash event," the leaked document says. "The occupants' knees may contact the lower seatback, resulting in injury."

Transport Canada's own database lists the models affected by the recall, but says nothing about the buses being given the green light to remain on the road even as the leaked document shows the seats do not comply with "minimum" safety standards.

Transport Canada declined to speak to The Fifth Estate. In a statement, the federal regulatory department said it was the bus company itself that notified the owners of the vehicles that they needed to "meet the ... standard."

"Further questions regarding the recall should be directed to Micro Bird."

The Micro Bird executive who wrote the leaked document did not return phone messages left by The Fifth Estate.

Brian Patterson, head of the Ontario Safety League, says it is Transport Canada's job to ensure the public knows about safety recalls that affect them.

"You have a role to play as a regulator. Do your job," said Patterson. "I find it shocking when people assume the responsibility and role and don't do anything."

The defect relates to certain models of school minibuses known as the G5, MBII and CT-Series but it is virtually impossible for parents to know if the bus their children are riding on has the defect.

Some of those school minibuses come installed with lap belts, though The Fifth Estate has no evidence any have installed the three-point lap and shoulder belts proven to prevent injuries and death in the event of a side-impact accident or rollover.

The Fifth Estate has found that there are several recall notifications relating to school buses on the Transport Canada website, but little information about the status of those recalls and whether the safety problems have been dealt with.

In its database, it publishes correspondence between the manufacturer of the safety defect and the transportation agency.

The NHTSA documents show the Micro Bird recall originated from the seat manufacturer in the United States, where buses are also affected. The Transport Canada recall was issued two days after the U.S. recall.

Transport Canada's no-seatbelt policy on school buses has been under the spotlight since October, when The Fifth Estate broadcast revelations that the department's own 2010 study showed school buses without restraints failed safety tests.

The report, authored by Transport Canada's head of test crash worthiness, Suzanne Tylko, was never made public until The Fifth Estate asked for a copy during its investigation.

After the program was broadcast, federal Transport Minister Marc Garneau said he had instructed Transport Canada to take an "in-depth" review of the seatbelt issue.

He said the review would be conducted "as quickly a possible."

That was more than six weeks ago.

Since The Fifth Estate broadcast, there has been a growing movement to convince the federal government to act.

School boards across the country have announced they are seriously considering going ahead with seatbelts on their own.

Gary Lillico, a bus driver in Harrison Hot Springs, B.C., has begun an online petition to demand that Transport Canada require seatbelts on school buses immediately.  As of today, it has garnered more than 41,000 signatures.

"How many more crashes and how many more lives are gonna have to pass … before this thing can get done?" Lillico told The Fifth Estate.

"Maybe this is the final nail in the no-seatbelt coffin because we don't want any more coffins."

'I wish I'd had the evidence'

Wynne says she was also never told about the 2010 Transport Canada report when she was in office. The first she heard of it was when she watched The Fifth Estate story on school buses. 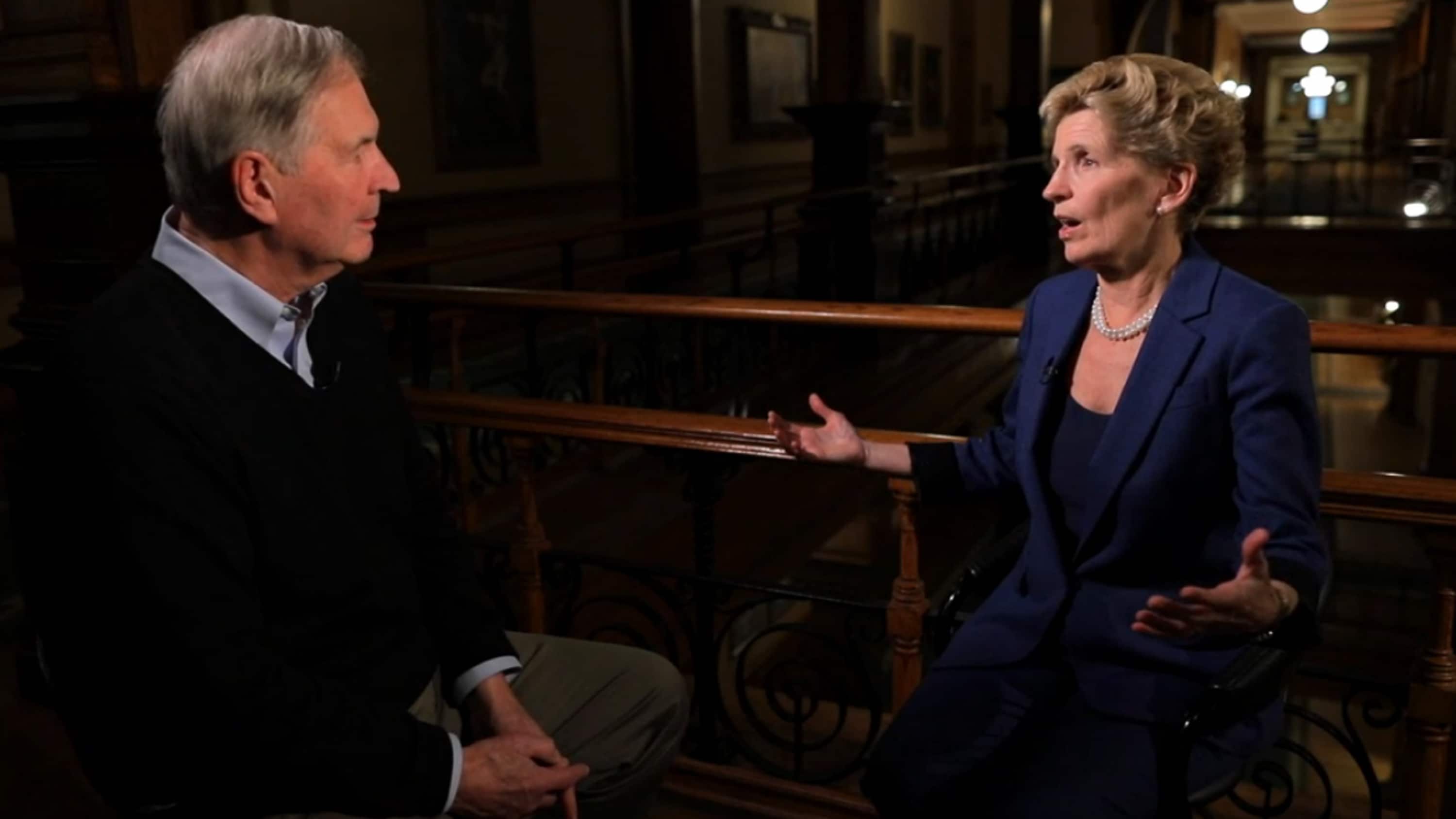 2 years ago
0:41
Kathleen Wynne advises Ottawa to move quickly on a seat-belt review for school buses. 0:41

"I felt terrible that hundreds of kids had been injured in the intervening period that we could have prevented."

"I'm glad that they've said they're going to review the regulations. I would say do it as quickly as possible," Wynne told The Fifth Estate's Bob McKeown.

"I think that Ontario can move ahead on its own but the fact is that we've got ... 12 other provinces and territories that need to have the same support and the same standard. We need a standard across the country."

Last week, there was yet another school bus crash without seatbelts on the Blood Reserve, west of Lethbridge, Alta.

"Knowing that this could have been prevented, their injuries, it really makes me angry that they gambled my children's lives like that," said Eagle Plume. " It's very upsetting to know that they know and haven't done anything about it yet."