School on the land: Indigenous teachings get kids outside the classroom

Parents and First Nations schools are turning to education options like medicine picking and getting out on the land as outdoor options for schooling amid COVID-19.

Just before her regular school year started, 18-year-old Isabella Zeller-Calahoo spent a day in late August learning to scrape a moose hide in her auntie's backyard in Edmonton.

"It's amazing, but [my] arms, oh me!" Zeller-Calahoo said. "They're weak right now, but they'll be tough when I get older; they'll be bigger."

The full-day process is a workout. It's also a lesson in biology, chemistry and art.

As her auntie explained, once the fur is scraped off the hide, the next steps for tanning involve softening the hide with brains and colouring it with smoke. And as her mother explained, every animal has exactly enough brain material to cover an entire hide.

An oil in the brain called lecithin softens the skin into a workable leather.

This is part of Zeller-Calahoo's school curriculum for the year. She's taking online classes at Strathcona High School in Edmonton, but during the day most of her studies will focus on land-based learning through an apprenticeship with her auntie, artist MJ Belcourt, whose family is also from the Michel Band in northern Alberta. 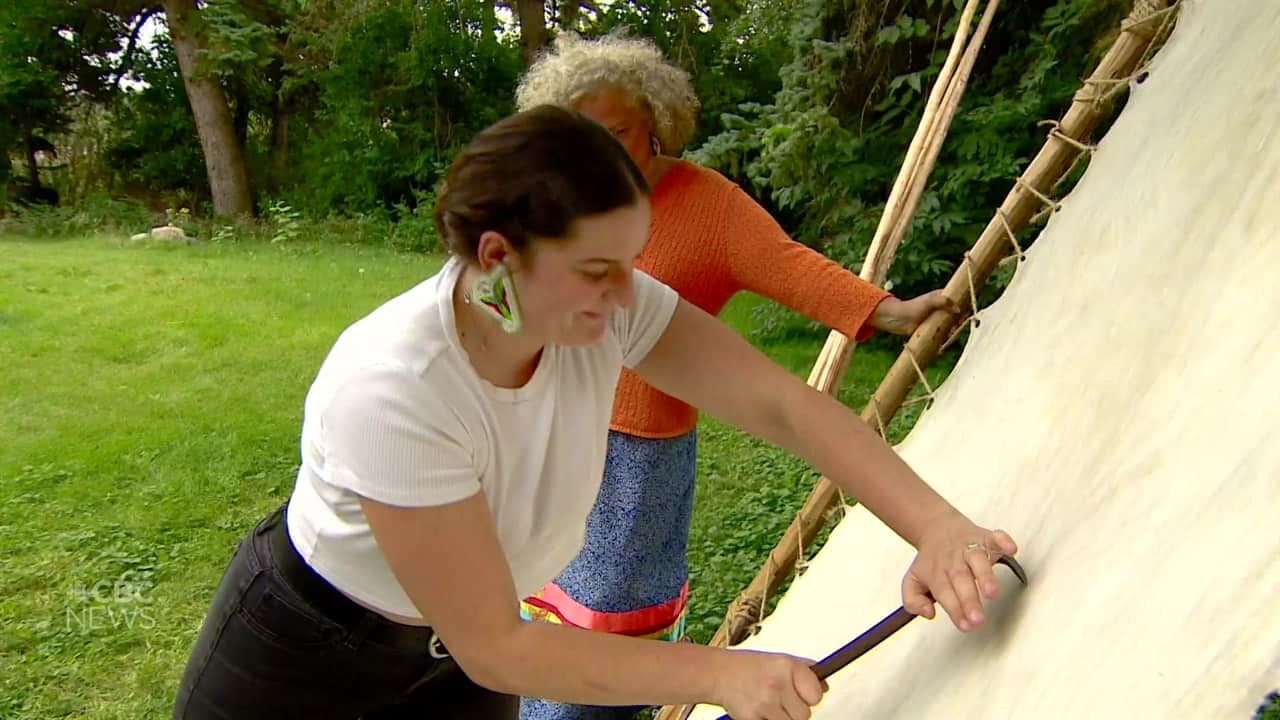 School on the land: Indigenous teachings get kids outside the classroom

3 months agoVideo
2:02
Parents and First Nations schools are turning to education options like medicine picking and getting out on the land as outdoor options for schooling amid COVID-19. 2:02

"I'm grateful that I had a chance to learn it, and I want to teach others who have that same desire," Belcourt said. It's meaningful for her to share generations of traditional skills like hide-scraping or porcupine quillwork.

National data on how many students are participating in land-based education projects this year doesn't exist. But educators say the programs have become increasingly popular since the COVID-19 pandemic began, with thousands of K-12 and college students in Alberta and British Columbia alone set to take part this school year.

Indigenous organizations are looking at outdoor learning programs as well.

In the last week of August, Bent Arrow asked parents on Facebook if they were sending their kids back to class. More than half of the people who responded said they were keeping them at home, while most students in Edmonton Public Schools will be going back to class.

"If we think about the smallpox pandemic, it wasn't that long ago in our history," Calahoo-Stonehouse said, referring to diseases that have taken a heavy toll on Indigenous people to explain why some families are especially nervous about sending their children back to the classroom.

Several First Nations schools in B.C. are expanding land-based learning this year because of COVID-19, according to Clayton Grice, president of the First Nations Schools Association of British Columbia and principal at the Tl'etinqox School, an elementary school in the Chilcotin District about 100 kilometres west of Williams Lake, B.C.

"More people are going out camping and fishing and getting back to the land, and we want to continue that as we plan for our reopening," Grice said.

One school plans to build a pit-house, a traditional lodge built by nomadic people, on school grounds. Another school plans to take students on a two-day trip out on their territory, he said.

Grice said the Tl'etinqox chief has specifically encouraged his school to do more land-based learning since the pandemic began. Students will be building a smokehouse and learning traditional hunting techniques like trapping and tracking this year.

He emphasized that the land is also a natural place for students to learn languages from elders.

"They might refer to the snares of the animals by that traditional name instead of the English name," Grice said. "It's an opportunity for us as school staff to say, 'OK, we're going to specifically target certain language goals in conjunction with this land-based activity.'"

Assembly of First Nations National Chief Perry Bellegarde said many parents are reviewing their school options this year, and land-based education is a good alternative.

"When you have the right instructors on getting back to the land, the knowledge-keepers have a lot to share and teach our children," Bellegarde said.

"People think you can only learn math and science according to a textbook — not necessarily."

Indigenous families who choose to pursue land-based education have another option outside of the classroom, he said.

Elder Tom Snow, who teaches medicine picking and on-the-land survival skills to youth in Edmonton, said it allows students to gain a greater appreciation for the environment and the history of their own people. And it's fulfilling for him to pass on those lessons.

"It's like a grandpa teaching his grandchildren," he said. "There's a feeling of elation when they're really into it."

Ariel Fournier is an associate producer at CBC Edmonton. ariel.fournier@cbc.ca