Joe Schlesinger, one of Canada's foremost journalists, has died at 90

Joe Schlesinger, who narrowly escaped the Nazis as a young boy growing up in the former Czechoslovakia and ended up becoming one of Canada's most beloved and respected journalists, has died at the age of 90.

Joe Schlesinger, who narrowly escaped the Nazis as a young boy growing up in the former Czechoslovakia and ended up becoming one of Canada's most beloved and respected journalists, has died after a lengthy illness.

As a foreign correspondent for the CBC, Schlesinger covered some of the most significant news events of the latter part of the 20th century and early 2000s.

He bore witness to historical events from Vietnam to the fall of the Berlin Wall and the first Gulf War, and he did so in his inimitable way, with his accented English, his gimlet eye for detail and the elan of a born storyteller.

"You could see the way he talked to the camera, embraced the camera," former CBC News chief correspondent Peter Mansbridge said today from his home in Stratford, Ont.

"In translating the story to all of us, whatever that story was, wherever he happened to be. Whether he was in Zimbabwe, being gassed by Zimbabwean soldiers, whether he was in Vietnam, whether he was in the streets of Paris during riots. He knew how to tell a story in a way that could really embrace the viewer. That's an art form."

Joe Schlesinger. Look at a map and it seems you could point to anywhere and remember a story Joe did from there. Storytelling that few will ever match and in ways that made us all better informed about the planet we live on. You’ve earned your rest Joe.

Schlesinger was in St. Peter's Square in Rome in 1978 when John Paul II became Pope and in Tehran a year later when the Shah fell.

Schlesinger reflected on his long tenure as a globe-trotting journalist in a 2009 interview with the Canadian Press, saying, "I have a career of wandering around the world, watching the universe unfold and actually getting paid for it. It's like a little boy's dream."

Born in Vienna in 1928, Schlesinger and his family later moved to the former Czechoslovakia, where he spent his early childhood.

He would later reflect that the experiences of his childhood were what led him into journalism, reporting on "the triumphs on the world," such as those momentous days in Berlin in the early 1990s, but more often on "the travails of war" and other disasters.

While living in Bratislava in the late 1930s, his family witnessed the rise of Hitler, and, as Jews, his parents were particularly fearful of what might happen to them.

They decided to send Schlesinger, then 11, and his nine-year-old brother, Ernie, to Britain under a study program for Jewish children.

Schlesinger and his brother were among the more than 200 kids who travelled under guard by train through Nazi Germany in June 1939 on the so-called Kindertransport.

The trip was one of a series of secretive operations that spirited thousands of Jewish children out of Nazi-occupied Europe. Schlesinger's parents were later killed in the Holocaust.

It was only revealed decades later that this daring escape had been organized by the eccentric British businessman Nicholas Winton.

"If it hadn't been for Nicky Winton, I certainly wouldn't be alive today," Schlesinger told Sook-Yin Lee on CBC's Definitely Not the Opera in 2011.

"This is the man who gave me the rest of my life."

Schlesinger eventually became close to Winton and wrote about him and the Kindertransport on several occasions.

Schlesinger and his brother returned to Czechoslovakia after the war, and one of Schlesinger's earliest journalism jobs was with The Associated Press in Prague in 1948.

But as the post-war Communist government began to arrest journalists, Schlesinger was forced to leave his homeland a second time. In 1950, he ended up as a refugee in Vancouver.

Schlesinger worked as a waiter, construction worker and seaman before enrolling at the University of British Columbia, where he spent much of his time at the campus newspaper.

This led to a job at a Vancouver paper and then a position at the Toronto Star.

Schlesinger would move overseas to join UPI in London and, later, the Herald Tribune in Paris before returning to Canada, where he started at the CBC in 1966.

Schlesinger quickly worked his way up into CBC news management but then made the unusual decision of returning to the field.

"I only realized as I started climbing up the ladder that this is not what I wanted to do," he said in a 1994 CBC documentary. "That's when I went out again as a reporter, and I've been happier ever since, thank you."

One of Schlesinger's first assignments back in the field was reporting from inside Mao's Cultural Revolution in China in the early 1970s.

In fact, he was one of the few to get a firsthand look at China's "Ping-Pong diplomacy," when a couple of Ping-Pong players from the U.S. and China helped change the course of history.

He would go on to cover such world events as the Iranian Revolution, the Contra war in Nicaragua and the first Persian Gulf war. Decades later, he remembered riding an elephant in Cambodia with an army patrol, chasing Khmer Rouge guerillas through the rice paddies.

"I fell off the elephant," he said. "But nevermind."

Former CBC News foreign correspondent Brian Stewart remembers his friend and colleague as "a global mind and a global reporter."

"He always took the sophistication into the field," Stewart said in an interview with CBC News Now. "He had a great context for stories, a great sense of history. He discussed the historical depth of stories so well ... and he always seemed to know more than we did because he did, let's face it."

Joe Schlesinger was one of the few journalists who managed to report from outside of Tehran during the Iranian Revolution: 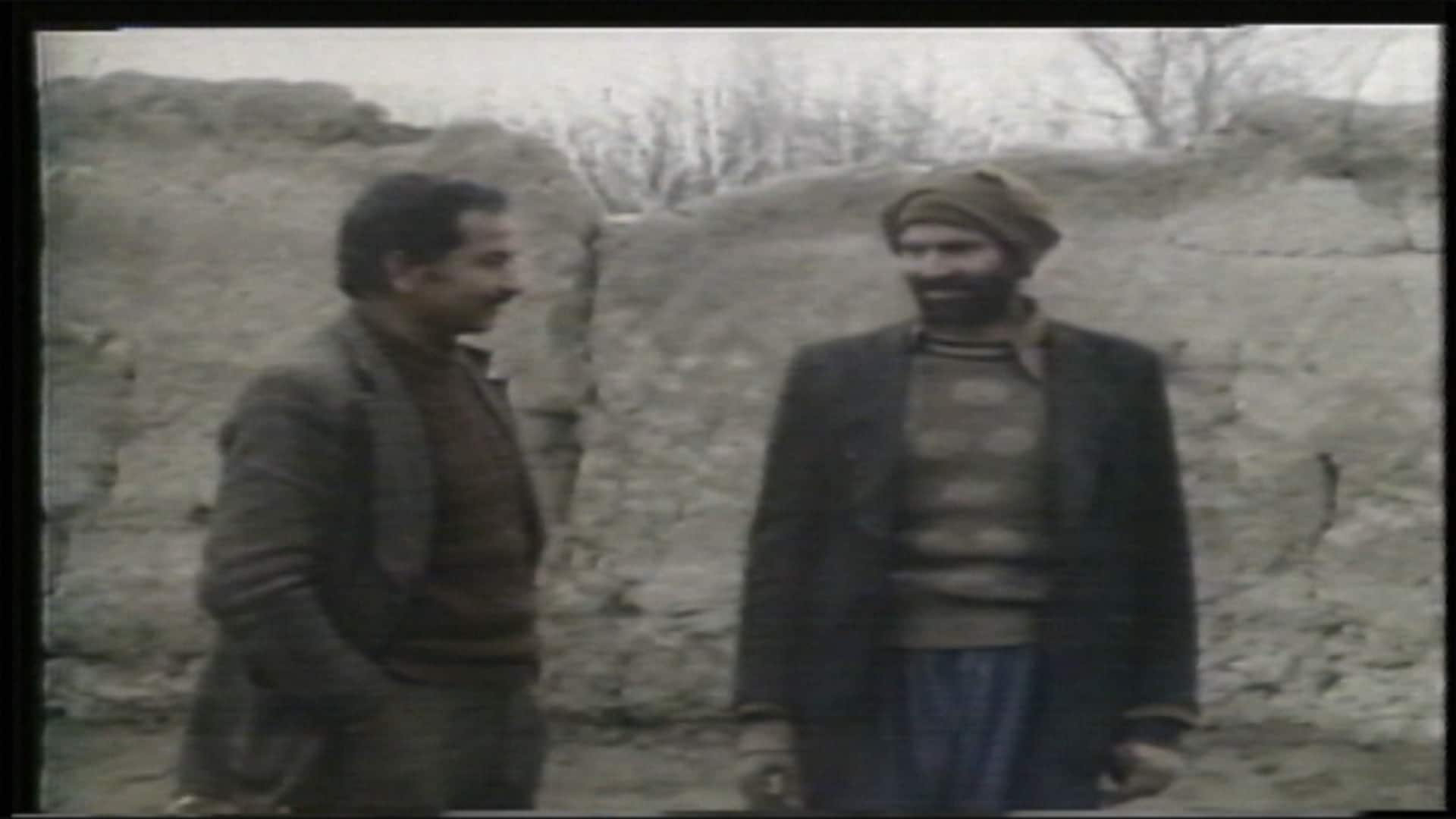 The view from an Iranian village

2 years agoVideo
2:41
Though the Iranian army was preventing journalists from leaving Tehran in February 1979, Joe Schlesinger managed to get to a village, and report on what people there were feeling about the Iranian Revolution. 2:41

The renowned journalist was inducted into the CBC News Hall of Fame in 2016. On that occasion, he shared with the CBC's Adrienne Arsenault the memory of what he loved most about being on the road.

He also worked as a correspondent in Paris and Washington, telling Czech Radio in a 2005 interview, "I was there when Gorbachev came to Washington, I was with Reagan in Moscow, and I was there in 1987 when Reagan was in Berlin and made his speech about 'Tear down that wall, Mr Gorbachev.'

"And I remember thinking at the time, 'That's not very likely to happen very soon.' And, of course, it did!"

Watch Joe's report from Berlin that day in 1987: 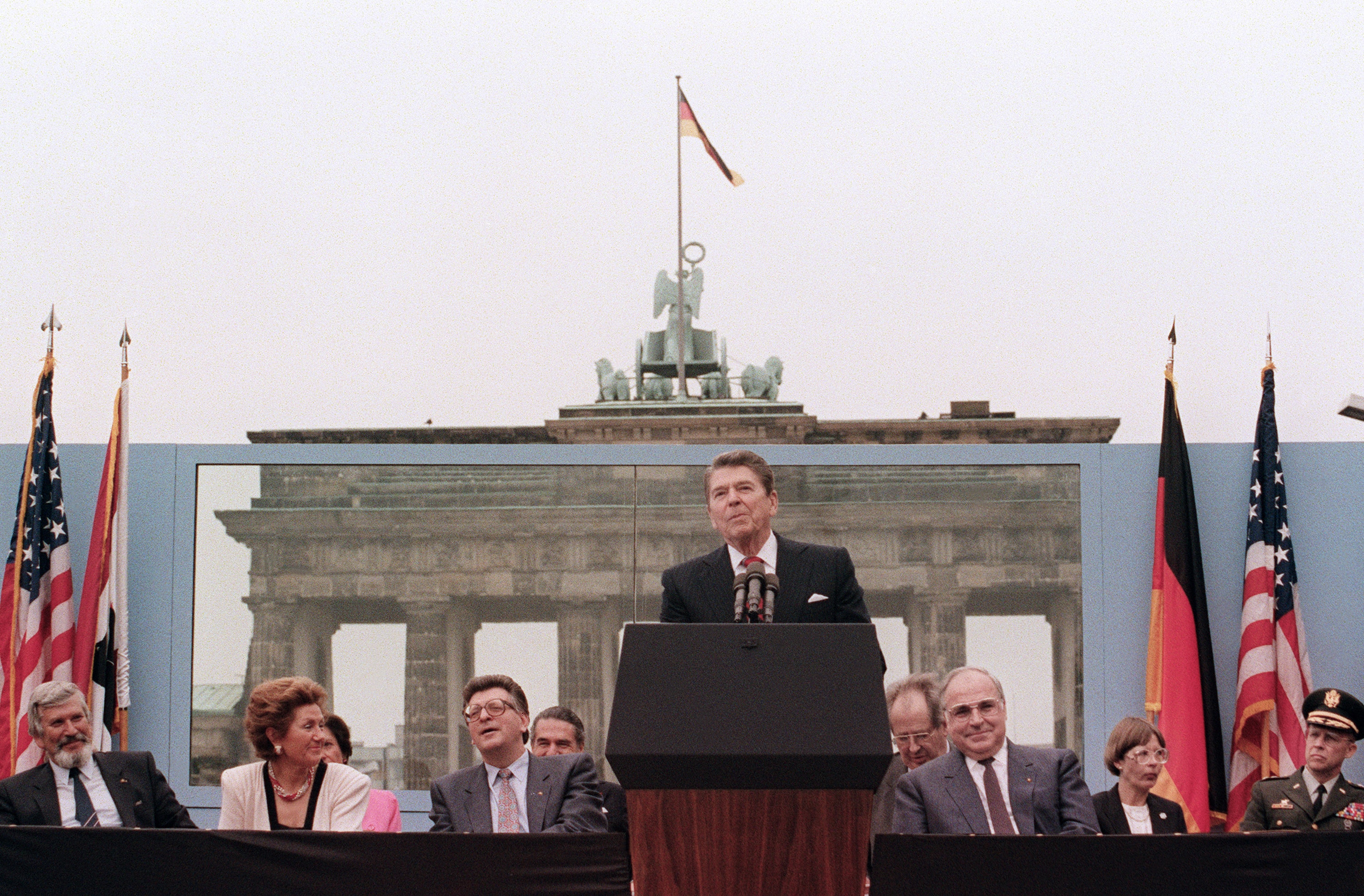 Ronald Reagan and the Berlin Wall

2 years agoVideo
2:23
Joe Schlesinger reports on U.S. President Ronald Reagan's famous trip to Berlin where he challenges his Soviet counterpart to "tear down this wall!" 2:23

He also returned to his homeland decades after he left, to report on the Velvet Revolution from Prague. He told the Toronto Star in 2009 it was a highlight of his career. 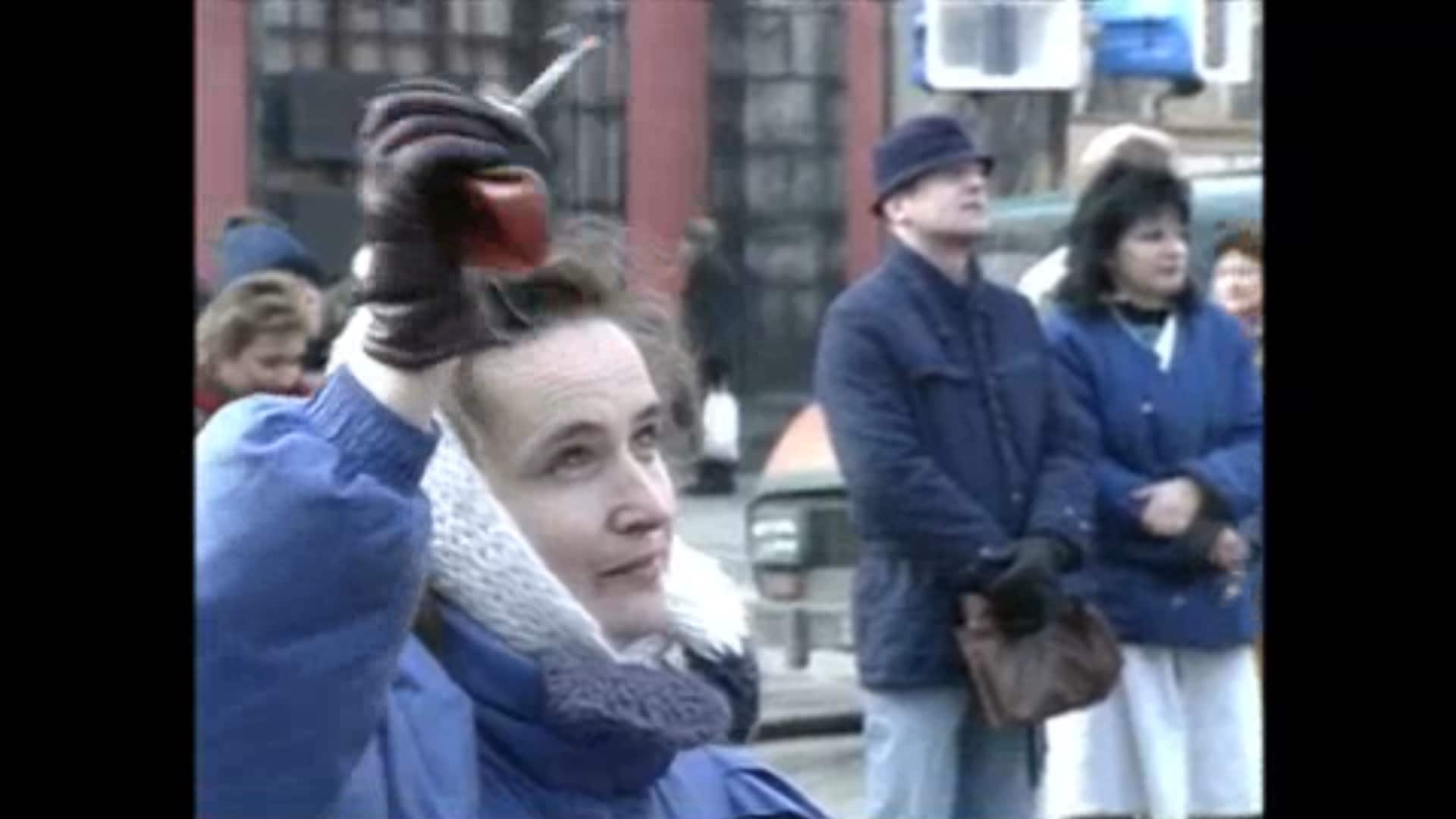 Schlesinger officially retired in 1994 but continued to contribute to CBC as a correspondent and an occasional columnist for CBCNews.ca until 2015.

His last CBC column was published in September 2016 in the midst of the U.S. presidential election and the controversy over Hillary Clinton's health problems.

A little less than a year prior to that, in December 2015, he explored a subject near to his heart: the plight of refugees, specifically those fleeing the Syrian conflict and seeking sanctuary in Canada.

In the piece, Schlesinger acknowledged that amid fears of high unemployment and the risks of terrorism, many Canadians had reservations about welcoming this crop of refugees.

But as someone who had been a refugee himself, and met many more during his decades-long career as a journalist, Schlesinger advised Canadians to be compassionate.

"This country was built  and changed for the better by refugees," he wrote.

The National's Adrienne Arsenault looks back at Joe Schlesinger's life and career. 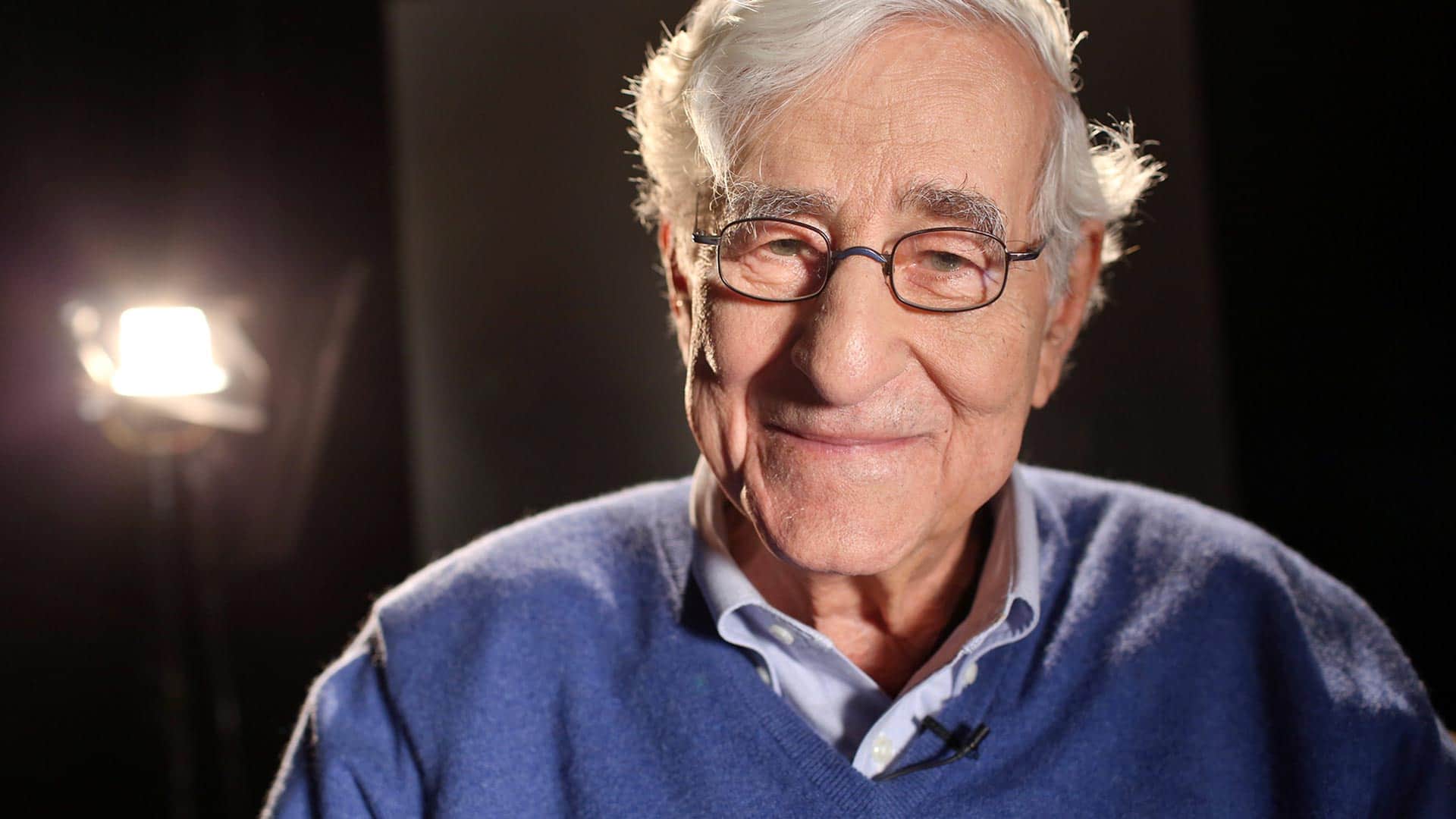 Joe Schlesinger on 'life as a witness to history'

2 years agoVideo
4:35
The National's Adrienne Arsenault looks back at the life and work of journalist Joe Schlesinger. 4:35