"Anyone who thinks they can have a perfectly safe system is not living in the real world," says supply-chain expert Barry Prentice.

'Anyone who thinks they can have a perfectly safe system is not living in the real world', says expert

The pipeline pitches came almost instantly last week. So did the conspiracy theories.

A Canadian Pacific Railway train derailment near Guernsey, Sask. — the second to happen in two months near the small hamlet — leaked an estimated 1.2 million litres of oil.

The fiery incident immediately sparked heated debate on social media about the safest way to carry oil over Canadian soil.

For many, the answer was obvious:

Gee what would have been better??? If only there was a way to transport oil without relying on moving containers...???

Others went even further:

Sabotage.... what better way to sell a pipeline...

But how much oil is actually moved by rail and pipeline? And what are the relative risks of either option?

CBC News sought out several experts and combed some of the latest available data in Canada.

Here's what we found out.

Pipelines move much more product every day, however. The system in western Canada alone can currently carry up to 3.95 million barrels of oil a day, according to the National Energy Board. The Canadian Association of Petroleum Producers predicts that number will go up to five million barrels a day by 2025.

Where do more spills happen?

Both pipelines and trains can have accidents, including spills, according to statistics from the Transportation Safety Board of Canada (TSB), which investigates accidents.

"The number of crude-by-rail spills has been actually quite high in the last several years, partly because there's more crude by rail," said Emily Eaton, an associate professor at the University of Regina's department of geography and environmental studies.

Between the years 2014 and 2018, more rail accidents involved human factors compared to issues with train tracks and equipment, according to Transport Canada, which regulates rail companies.

Pipeline incidents involving the release of oil, condensates or refined products are rare. There were only four in 2018, and five in 2017, meaning they account for only a sliver of all occurrences with or without releases, according to the TSB.

"There are more incidents [with rail] when you do the math," said Chris Bachmann, an assistant professor in the University of Waterloo's department of civil and environmental engineering.

"It's often about four times as many incidents with rail," he added, citing a 2015 report from the Fraser Institute, "which would lead you to believe that it's less safe.

"But if you think [of the] risk, it's just telling you that the rail incidents have higher probability because there's more of them. It says nothing of the consequence."

Overall, according to a 2019 report prepared for the Canadian Railway Association, "the incident rate for both modes is very small — an average of 0.0076 incidents per billion gallon-miles for pipeline and 0.0054 for rail."

Pipeline spills may be rarer, but when they do happen, "they tend to be quite a bit larger," said Barry Prentice, a professor in supply chain management at the University of Manitoba's Asper School of Business.

According to a 2014 congressional research report in the United States, between 1996 and 2007 "railroads consistently spilled less crude oil per ton-mile than trucks or pipelines."

The two recent oil train spills near Guernsey, Sask. — first on Dec. 9, 2019, followed by Feb. 6 of this year — each spilled at least five times the amount of the oil that flowed into the North Saskatchewan River after a Husky Energy pipeline near Maidstone cracked in the summer 2016.

Neither Guernsey train derailment affected waterways, CP Rail said, and the frozen ground near the track likely helped reduce the risk of contaminants penetrating too deeply, according to the Saskatchewan government.

A significant amount of the diluted bitumen onboard the Feb. 6 train burned off, the province added.

But that's a health hazard unto itself, said Karen Clay, a professor of economics and public policy at Carnegie Mellon University.

Clay's own 2014 study looked at pipeline and railway spills' contributions to greenhouse gas emissions. She found that moving oil by train causes about 50 per cent more GHG emissions than carrying it through pipelines.

Clay also concluded that train spills are costlier when it comes to cleanup and hospitalization spending.

"These numbers tend to be on the [conservative] end because these are based on reports by shippers…." Clay said. "How much they spend is….not perhaps all encompassing of the total kind of social damage."

Are pipeline spills harder to detect?

In the second train derailment near Guernsey, at least 12 train cars caught fire, sending large balls of flame into the dark air as early-morning commuters rode by on Saskatchewan Highway 16.

"When a train's derailed, man, you know it because the oil is burning off," Bachmann said. 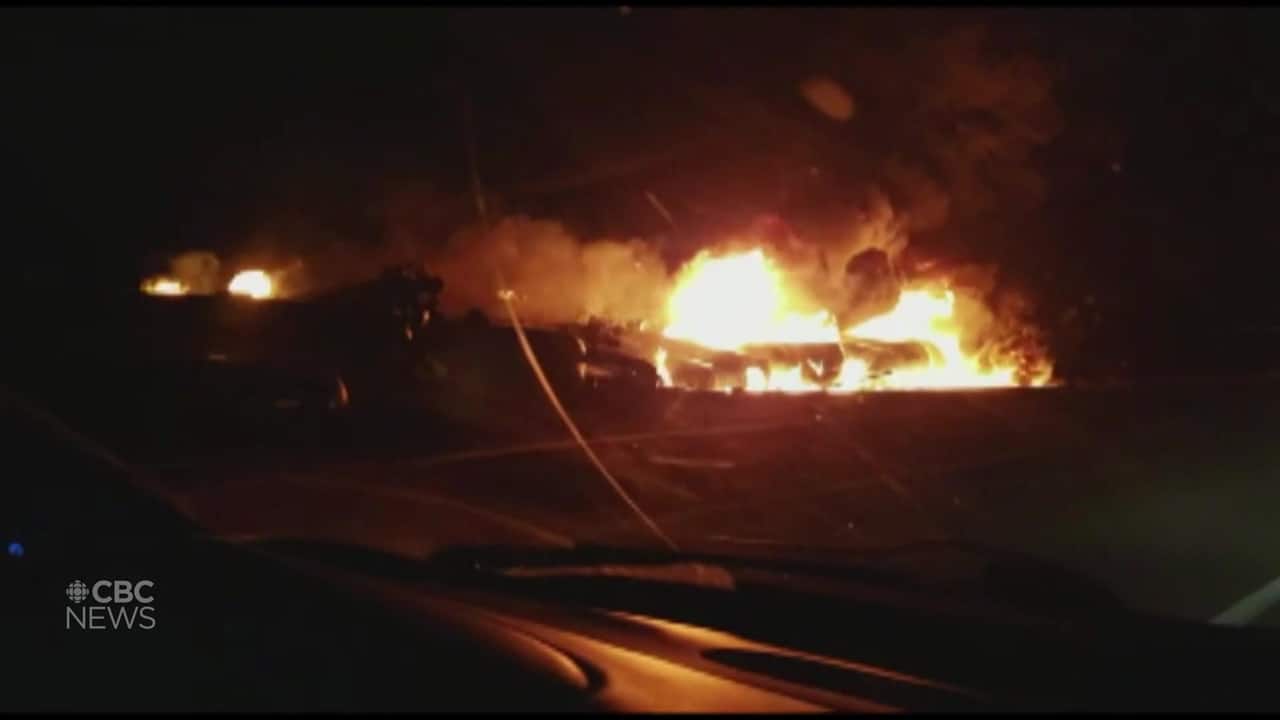 This video the scene of a train derailment near Guernsey, Sask., shows clouds of black smoke and flames in the air over the train

1 year ago
0:24
For the second time in a matter of months, there's been a fiery rail crash near a Saskatchewan hamlet. 0:24

"Pipelines could be going through very environmentally sensitive areas and a release in one of these remote locations could take a really long time to detect," Bachmann said.

Though pipeline leaks can go on for days, spills from bigger lines stand a better chance of being detected sooner, Eaton said.

Larger inter-provincial pipelines, such as those that travel from the Hardisty oil terminal in Alberta through Saskatchewan, are serviced by a vast network of other pipelines, she said.

"And those pipelines have way less surveillance associated with them," Eaton said. "So it's a complicated question I guess."

Pipeline operators can detect something is wrong through a change in line pressure, Prentice said.

During the 2016 Husky pipeline spill, oil leaked into the North Saskatchewan River for over a day, according to the company's 2019 court settlement.

But Husky has instituted a new policy where pipeline sections are shut down if the cause of an alarm isn't pinpointed within 30 minutes.

Has a Canadian ever died from a pipeline spill?

"I can't think of one," Prentice said, adding that most pipelines are far from people's homes.

But many train routes go through populated areas, "as demonstrated by the tragic incident at Lac-Mégantic," Bachmann said.

In that July 2013 Quebec rail disaster, an unmanned train rolled down the steep hill above the community, derailing and exploding in the centre of town. Forty-seven people died that night.

Some pipeline incidents in Canada, while not spills, have proved deadly too.

Bruce Campbell, the author of a new book called "The Lac-Mégantic Rail Disaster", points to two incidents. Both date back decades: a 1962 gas pipeline explosion near Edson, Alta., that killed eight people, and another gas line explosion three years later, that killed 28 people in LaSalle, Que.

Still, "generally pipelines don't catch on fire," Clay said, whereas train derailments like the ones in Guernsey provide a "super scary visual."

So if pipelines leak less often, why are trains still used to haul oil?

It's generally costlier to ship oil by train than pipeline, Prentice and Bachmann said.

Why bother with rail then?

"There's just no room left on pipelines," Bachmann said. "They're booked up."

And if growth estimates like the one from the Canadian Association of Petroleum Producers come true "and we don't build more pipelines, you're looking at about a million barrels per day that will end up on the rail network," Bachmann added.

The world oil market is also a factor, according to Prentice.

The Brent international crude price is typically higher than the American price. But most pipelines only connect to the U.S., making rail lines the only way to get product to international markets, Prentice said.

"That actually helps to offset the higher costs of moving oil by rail," he said.

"The truth is the oil industry wants as many modes of transportation as possible," she said. "Some refineries are not accessible by pipeline and are only accessible by rail and so it really depends what oil fields you're looking at."

No matter the chosen transportation route, the potential for an accident exists — we just have to accept that, Prentice said.

"Anyone who thinks they can have a perfectly safe system is not living in the real world," he said.