From golf balls to hammer strikes: SGI on the lookout for hail damage fraud

It's easy to spot, so pummelling your car with a golf ball probably won't get you a new paint job

Hail storms bring with them thousands of claims to insurance providers, some of them fraudulent.

"We are committed to investigate any suspicious claims. Our employees and partners are experts in the field and know what to look for," said SGI spokesperson Marie Schultz in an email statement.

Over 18 years as a dent technician, Brad Classen has only seen "half a dozen" fraudulent claims, which he reported immediately to SGI.

"If it's done with a golf ball you'll actually see the impression of the golf ball in the clear coat. All the round circles in a golf ball show up in the paint," said Classen.

A hammer strike shows up the same way, but with scuff marks at the centre.

A hail strike shows up as a smooth dent.

"Some of the hail is jagged but it's ice. It doesn't have abrasives in it. It's not going to scratch the paint," said Classen.

"I've never, ever seen it scratch the paint in 18 years of doing this."

To repair dents created by hail, Classen accesses the car's body from the inside and pushes it out, using special tools.

He shines a bright light on the body to highlight dips in the structure and gently massages out the damage.

"If they had an older car and the paint was scratched and they wanted it painted, they put in a fraudulent claim and they'd get their car painted," said Classen, who specializes in paintless dent repair.

"They're still possibly trying to get their car written off or they're under the understanding that they can get it painted when they can't."

SGI has received 20 auto claims from the most recent hail storm in Saskatoon, pertaining to hail and submerged vehicles, especially in the Confederation neighbourhood.

Over the past five years, SGI has received an average of 8,200 auto hail claims per year. 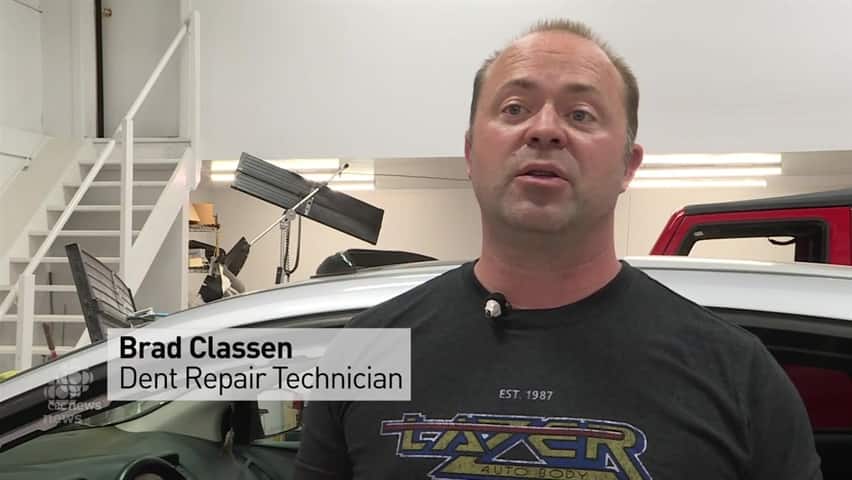