Firefighters have been taking on a fire at a tire recycling plant just outside of Saskatoon for over 26 hours.

Firefighters have been taking on the fire for over 26 hours 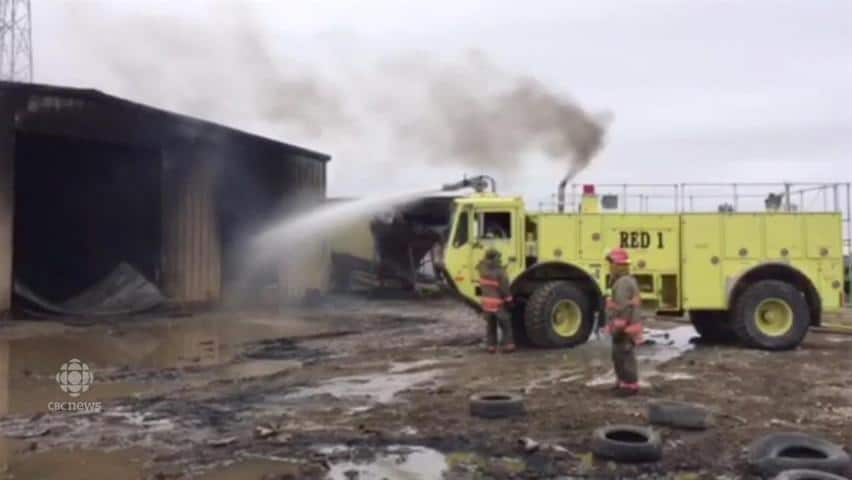 5 years agoVideo
0:51
More than 75 firefighters from Saskatoon, Martensville and Warman have spent hours trying to contain the flames which began burning on Monday night. 0:51

Fire crews are gaining the upper hand in their efforts to extinguish a stubborn fire at a tire recycling plant north of Saskatoon.

After 26 hours of operations crews have saved the office building and manufacturing processes, Saskatoon Fire assistant chief Dave Bykowy says. They were also able to save key computer equipment although there was heavy smoke damage in the building.

But the fight is certainly not over.

"This was and continues to be a very difficult fire," Bykowy said in a press release Tuesday night.

So far, over 140 fire, environmental, police, and provincial fire professionals have been working together to put the flames out.

Bykowy said the current priority is to tackle a stubborn, concealed fire which is burning among 80 barrels of polyurethane.

Crews will work through the night to expose and extinguish spot fires and Bykowy said they will re-assess the situation in the morning.

The fire department was called to Shercom Industries, a tire recycling plant in the North Corman Industrial Park, just after 7 p.m. CST on Monday. Smoke and flames were seen coming out of a warehouse at the plant.

It's believed that the fire spread to a second building, containing more than 9,000 kilograms of shredded rubber and 80 large barrels of polyurethane.

Shercom Industries said the buildings were unoccupied at the time, although staff members were in other buildings.

"Shercom wants to express their sincere appreciation to all emergency responders for their commitment and expertise in this difficult and potentially dangerous situation. Thanks to them, everyone is safe," Shercom president Shane Olson said in a media release.

Olson added that "no tires were involved". 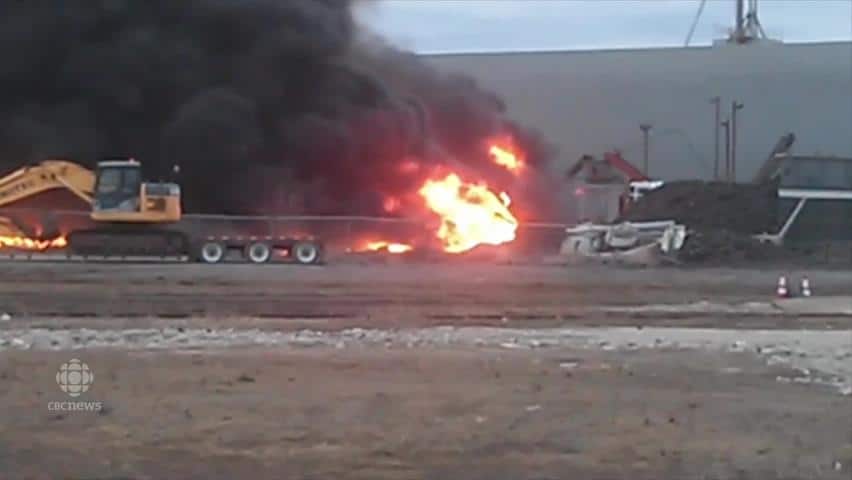 In a video submitted by Ferencs Kovacs, fire crews battle a stubborn fire at a tire recycling plant north of Saskatoon.

5 years agoVideo
0:39
Over 75 firefighters from Saskatoon, Martensville and Warman have spent hours trying to contain the flames. 0:39

A release from the fire department said the shredded rubber involved in the fire can make it very difficult to extinguish.

"Rubber tire fires are notoriously difficult to extinguish," Bykowy said.  "Rubber burns very hot. It liquefies, it spreads, and as well the smoke is extremely acrid."

Pulling down the second building to allow access to spot fires. <a href="https://t.co/p37HSVGGzF">pic.twitter.com/p37HSVGGzF</a>

The fire department is worried about the toxic fumes being carried by the smoke. As of Tuesday afternoon, the smoke was not a risk to the public.

"Currently the wind is pushing the plume between the cities of Saskatoon and Martensville and is dispersing the concentration of the smoke," Bykowy said. "The risk remains minimal at this time."

Shercom Industries recycles tires to make paving tiles, rubber paving and playground surfaces. Shercom said the cause of the fire is under investigation and the company is also conducting its own internal review.

Haz-mat teams from the Ministry of Environment were on the scene monitoring for levels of pollutants including sulphur dioxide.

The ministry's chief engineer Kevin McCullum said there is no danger to the public right now.

"We tend to monitor a lot of the criteria pollutants that come out of this," he said.  "So this would be stuff like the sulphur dioxide because of the high sulphur content in the rubber tires."

He said crews will continue to monitor the situation.