The Dragons have agreed in principle to pump $1 million into Excir Works, which has now moved its main plant to Calgary. This should help the company scale-up and begin extracting gold from electronic waste.

Fictional heroes sometimes need to go through dragons to get at some gold.

That's sort of what happened for a Saskatoon start-up on a real life quest to extract gold from electronic waste.

For Saskatoon's Steve Foley, the dragons were not the mythical, fire-breathing kind. Instead, they took the form of the hard-nosed, business savvy panel on CBC's reality television show Dragon's Den.

"I thought it would be a total train wreck," said Foley, who successfully pitched the dragons on his company Excir Works on an episode that aired Thursday night.

Hopefully we emerge with a bang in 2019.- Steve Foley

Foley is a chemist who helped come up with a process to quickly pull precious metals from electronic waste like old computers and mobile phones He told CBC Radio's Saskatoon Morning that, "our focus is on gold." 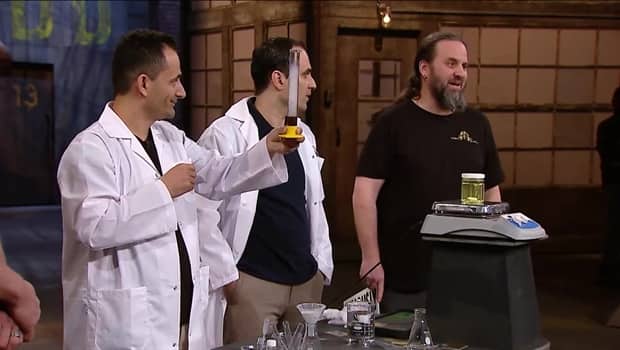 2 years ago
10:35
A team of scientists from Calgary, Alta., think they have a golden opportunity for the Dragons. 10:35

Excir Works are like modern day prospectors. Foley said there is a lot of gold in those mountains of e-waste. He told the dragons that some 50 million tonnes of electronic waste is generated annually and buried in all those old gadgets is about $15 billion dollars' worth of gold.

"You could tell they didn't quite get it and so I thought it would be like 'ya you are outta here' exit stage left kind of thing," he said. "I think in the end they finally understood what we were trying to do and what we are trying to accomplish."

Gold for the taking

This e-waste bonanza is no secret. Everyone knows the gold is there. But Foley said there are challenges to getting at it.

"It's very difficult to isolate from other metals, especially when only very small amounts of it are present."

Excir Works has developed a method to pull the gold away from other metals quickly, and it's that process that the Dragons have invested in, to help the company scale up to prove that it can be done on a large scale that is economically viable.

How Dragon money will help

The Dragons have agreed, in principle, to pump $1 million dollars into Excir Works, which has now moved its main plant to Calgary. In exchange for their investment, the Dragons (all bought in) will get an 18 per cent share in the company.

So what does that bang look like for the company?

"We anticipate a fully operating plant that is processing tonne quantities of electronic waste," Foley answered.

Foley said such a plant could produce a kilogram of gold, which is currently worth $38,501.81 US, each day.