Saskatoon police confirm that changes made to a Wikipedia page about the department were traced back to the police station.

A university student working on a project about police brutality says he uncovered how someone inside the Saskatoon police station deleted the section on "starlight tours" from the department's entry on Wikipedia.

The deleted section referred to cases of the Saskatoon police taking aboriginal men and women to the edge of the city in the winter and abandoning them, a practice known as "starlight tours."

Police investigated his claim and will only say someone using a police computer did something to the online encyclopedia.

"We had our IT specialists look into it," Saskatoon police spokeswoman Alyson Edwards said.

"They were able to identify one of the visits to the Wikipedia site in which something, some of the information was either added or taken away, I don't know, it's impossible to know for sure."

We need to be honest about our past as a country to move forward.–Addison Herman

Addison Herman has no such doubts. He said it's simple to trace who makes changes to Wikipedia articles and the site clearly posts the information.

Anyone changing an article leaves their internet protocol address, a series of numbers attached to computers in a network that allows someone to track communications back to a location, and often a specific computer. 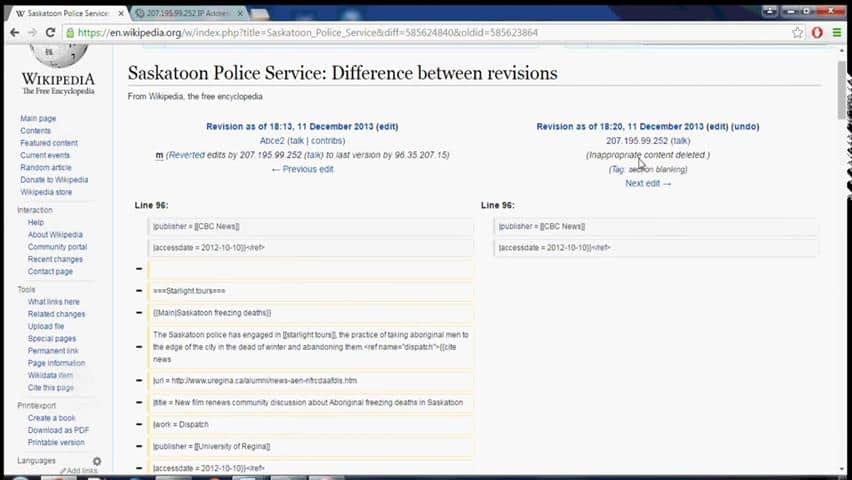 5 years agoVideo
0:36
A university student working on a project about police brutality says he uncovered how someone inside the Saskatoon police station deleted the section on "starlight tours" from the department's entry on Wikipedia. 0:36

Edwards said police will likely never know who inside the station made the edits to the webpage because the department's internet server logs are only kept for 30 days.

"We will never know for sure what computer, who signed into that. It's my understanding that, at any time, up to 200 people would be utilizing the same server, " she said.

The deletion came to light when Herman started to research the Saskatoon police as part of a history class.

He went to the Wikipedia page on the Saskatoon Police Service.

"I noticed there was no section on the starlight tours. So I looked in the article history and there was an IP address that took it off the page," he said in an interview.

"I looked at the info for the registration on the IP address, and that IP address pretty much is registered to Saskatoon Police Service, which means that a computer from their office went on Wikipedia and took it off."

And it happened more than once. The section was deleted, added back and then deleted again between 2012 and 2013.

Herman is going to university in B.C., but grew up in Saskatoon and went to high school here. He knows about starlight tours and was surprised to find no reference to the practice in the article.

Surprise turned to dismay when he began tracking the history of the entry.

"We need to be honest about our past as a country to move forward. And this is just a few steps backward, in my opinion," he said.

Edwards said the department has nothing to do with the Wikipedia history of the service. She said it doesn't endorse trying to excise that episode from its past.

"We have implemented every recommendation from the Neil Stonechild inquiry,' she said.

"We want to continue to do the positive things that we are doing following the Neil Stonechild inquiry."

Stonechild, 17, was found frozen to death in a remote field in Saskatoon in November 1990. The police investigation found no signs of foul play.

In 2003, the government of Saskatchewan called an inquiry into his death. The inquiry heard from 43 people over 64 days.

Under the inquiry's terms of reference, Justice David Henry Wright was prevented from assigning blame but could make recommendations.

When released in 2004, the report included eight recommendations, including adding aboriginal officers on municipal police forces in Saskatchewan.