Saskatoon police are investigating after a video was posted online that appears to show one of their officers punching a suspect who was laying face down on the pavement. 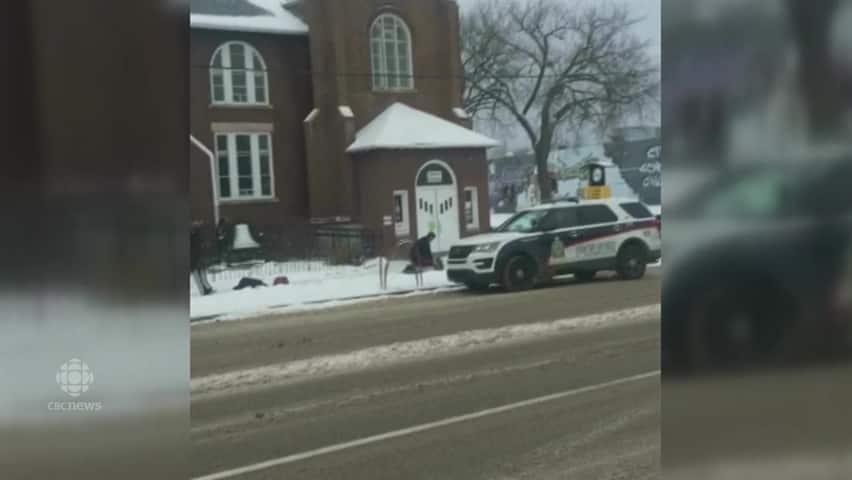 2 years agoVideo
0:15
A witness shot this video of a police officer apparently punching a suspect outside St. Thomas Wesley United Church in Saskatoon on Nov. 10, 2018. 0:15

Saskatoon police are investigating after a video was posted online that appears to show one of their officers punching a suspect lying face down on the pavement.

Eric Cameron, who shot the video, says he and his wife stopped in their car near the corner of Avenue H and 20th Street around 3 p.m. CST on Nov. 10 to take a phone call, when they saw the altercation between the officer and the woman begin in front of the St. Thomas Wesley United Church.

Cameron says the only thing he saw the woman do before the officer pulled up and arrested her was ring the doorbell of the church. That's when Cameron got out of the car and begin filming on his wife's phone.

"That was shocking. That was an excessive use of force," he said.

Saskatoon police would not offer any further comment on the video, saying only that there is ongoing investigation into what happened.

Woman was yelling at officer before arrest

The video shows the officer on top of someone whose legs are behind them in the air. The video captured at least two punches, which appear to be aimed at the back of the suspect's head.

Before he began filming, Cameron said he did hear the woman yell at the officer, repeatedly asking if police intended to arrest her. But then, he says, once she was on the ground, she was being submissive.

"Her hands were behind her back. She wasn't resisting, she was complying," Cameron said. "He proceeded to punch her in the back of her head."

Neither the woman nor the officer are identifiable in the video and police would not say whether the woman had filed a complaint with police.

"These people are here to protect us and they uphold the law. By rights, they are the name and the face of the law and to see them physically assault someone like that was shocking," Cameron said.

He said he doesn't have a negative view of police, but felt he had a responsibility to take the video and post it.

"You treat them with respect, they treat you respect. And to see something like this, my view hasn't changed," Cameron said.

"Just like in any job, you're going to have one bad seed."