'What we need right now...is for everybody to chill': Saskatoon police chief on pot legalization

During a recent episode of CBC's Power & Politics, Saskatoon Police Chief Clive Weighill told a national audience that everyone needs to 'chill' when it comes to legalizing marijuana.

Clive Weighill, President of the Canadian Association of Chiefs of Police and Saskatoon's own police chief, offered up his thoughts on marijuana legalization and dispensaries during a live, national interview of CBC's Power & Politics on Feb. 10.

His particular choice of words had Power & Politics host Rosemary Barton laughing at one point during the interview. 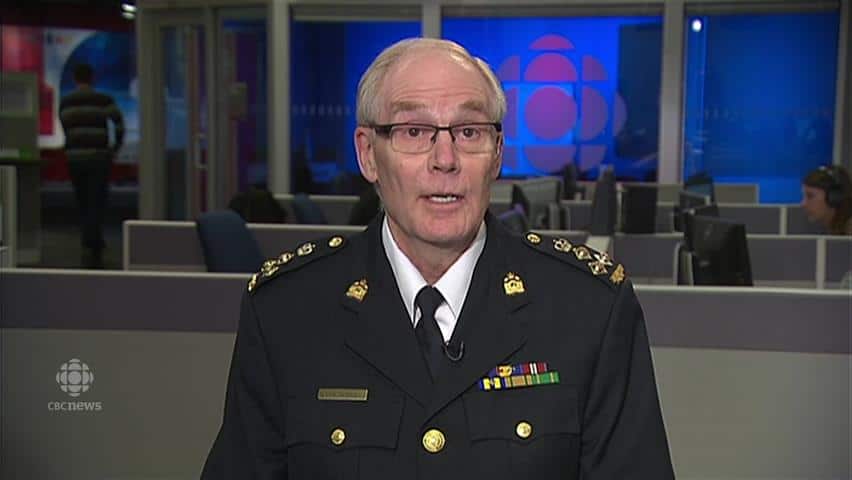 5 years ago
0:41
During a recent episode of CBC's Power & Politics, Saskatoon Police Chief Clive Weighill told a national audience that everyone needs to 'chill' when it comes to legalizing marijuana. 0:41

Here's an excerpt of what happened:

Q. What about an amnesty? What do you think of that idea?

A. Well, that will be up to the government. We don't dictate public policy. We can only enforce the laws we have before us.

Q. But, do you think it could make sense? Otherwise — I understand your job is to enforce the Criminal Code, but— your enforcing a Criminal Code that's about to be changed. And yes you don't know what it is going to look like, but is it worth the time to go after people for simple pot possession at this point?

A. You know, I don't think as the police, we're certainly not anti-marijuana, and we're not worried about small possessions. What we're more concerned with is dispensaries that are opening up, and actually getting the product off the market, that is off the market and then selling it illegally. It is the bigger picture here that we are concerned with. We're not worried about the minor possession.

Q. What would you advise the government to do about how it goes about legalizing marijuana?

A. Oh, far from me to advise the government how to do that. All we want to do is make sure we are part of the consultations.

Q. So would you like, for instance, Mr. Blair to say very clearly to dispensaries, or Canadians that are going to marijuana dispensaries, that they should back out of that option?

A. Certainly anybody who is thinking about setting up a dispensary. Right now, Health Canada has special arrangements with growers and producers that are all licensed. We have that across Canada right now. People can get their medicinal marijuana through the mail, so that system is there. What we need right now, is just, I think, for everybody to chill and we'll see how this is going to take place. It is going to take a while for this, you know, to unfold.

Q: That's an interesting choice of words there, Chief, given that we're talking about pot.

The above interview has been edited for length and clarity.

Online commenters had choice words of their own for Chief Weighill's relaxed comments on the matter.

In October 2015, the Saskatoon Police Service (SPS) raided a pot dispensary in the city.

The move sparked outrage on behalf of medical marijuana advocates in the city.

Despite the raid and criminal charges, the dispensary reopened the next month. However, there was no medical marijuana left to sell. The measure was a symbolic point of defiance for its owner.

An expert referred to the situation as the 'last gasp' of cannabis prohibition.

In January 2016, the Crown dropped some charges laid by the SPS.