Firefighers will be marching through downtown Saskatoon this afternoon in memory of two comrades who died in a fire more than 30 years ago.

Plaque dedicated to two firefighters who died in blaze in 1980 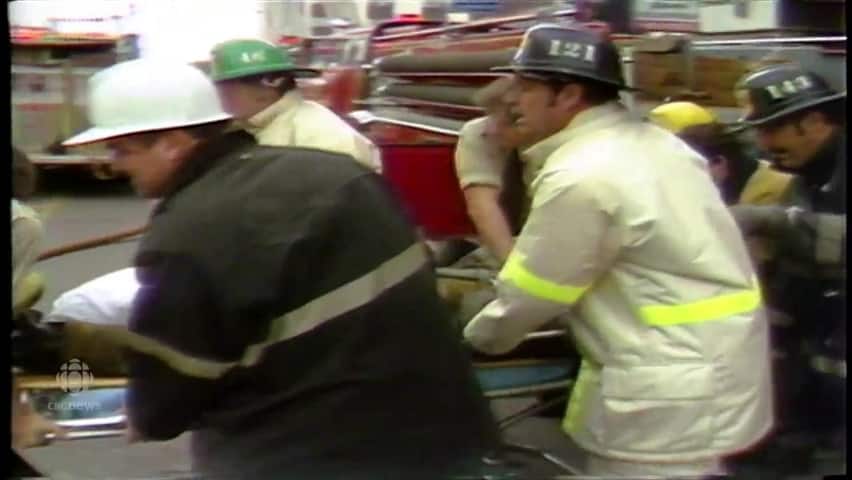 Firefighters marched through downtown Saskatoon this afternoon in memory of two comrades who died in a fire more than 30 years ago.

Victor Budz and Dennis Guenter died while fighting a fire in the basement of the Queen's Hotel on May 31, 1980.

A memorial plaque was unveiled in the presence of family members and dignitaries at the site of the hotel fire, at what is now the Scotiabank Theatre.

Lt. Wayne Budz of the Saskatoon Fire Department said his uncle was the reason he decided to become a firefighter himself.

"It means a lot, because anytime anybody's downtown they can go to the site and keep the memory alive for the family and the citizens of Saskatoon," he said.

News reports at the time said that five firefighters were called in to investigate a fire in a space rented out by a local weightlifting club. The firefighters were hit by a powerful backdraft, which filled the room suddenly with intense smoke and heat.

The backdraft, combined with the weightlifting equipment, ultimately led to the deaths of Budz and Guenter.

Saskatoon's fire chief Morgan Hackl said the idea of installing a commemorative plaque at the site was brought forward by the Saskatoon Downtown Business District to the firefighters union and the fire department.

Hackl added it's crucial for firefighters here in the city to realize just how serious their jobs are.

"It's important for our firefighters here today that are current firefighters to talk with the retired firefighters who were on scene that day that were searching for their brothers," he said.
CBC's Journalistic Standards and Practices|About CBC News
now