Bob Ginther has invented a triangle-shaped toilet plunger that he says works much better than round plungers on most modern toilets.

Ginther has invented a triangle-shaped toilet plunger that he says works much better than round plungers on most modern toilets.

"Round (plungers) don't work worth a darn," Ginther told CBC Radio's Saskatoon Morning. "Not trying to put down other plungers, but customers are always saying this thing don't work.".

Ginther has spent years clearing plugged drains as a Roto-rooter contractor, and hearing customers complain about the plungers on the market.

"As I was going to unplug their toilet they would said, 'I wish somebody would come up with a plunger that actually worked,' and then a second customer said that, and it just clicked. And I thought to myself, 'Why don't I (invent a new plunger),' " Ginther said.

So he rolled up his sleeves and set about doing the dirty work of making a better plunger.

"I never told anybody about this. No family, no nothing," Ginther said.

He only told his wife when they had to go to the bank to finance the project.

"I wanted to surprise everybody," he said.

He used his knowledge from working in a foundry making moulds to develop prototypes. 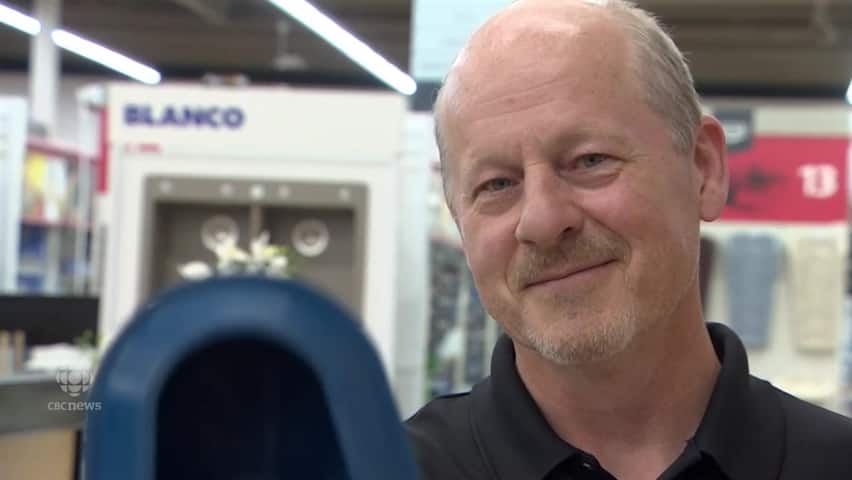 2 years ago
0:43
Bob Ginther has invented a triangle-shaped toilet plunger that he says works much better than round plungers on most modern toilets. 0:43

After many plunges and about $100,000 invested, Ginther came up with his own toilet plunger.

He said the different shape works better on almost all modern toilets. It has to have good spring back so you get good suction.

A friend in Ontario connected him to a vendor in China to make the plunger and Ginther was in business.

Besides selling the plunger himself, Ginther has the plungers in some co-op stores.

Geoff Mandeville, hardware manager at the Avenue C Co-op Home Centre, said he's never seen anybody as passionate about plungers as Ginther — and sales have been strong.

"(People) are interested and they want to try it," Mandeville said. "We've definitely had some good feedback from it that it works well."

Flushed with that type of success Ginther is determined to root out more profits.

"I want to get him in all the Co-ops, all the Canadian Tires and eventually go from there," Ginther said. "And we're just gonna keep a whole bunch in his warehouse and if somebody wants some we'll just ship them."

Ginther knows he'll have to find a lot of plugged toilets to recoup his investment, but feels he'll come out smelling like a rose.

"You're lucky if you break even at the start, but after a while you'll start making more. It's what I've heard and that's how it is happening here," he said.

"I knew if I could make this work it would work. And that's why I put all my heart and soul, money into this thing. And if it doesn't work ... at least  I tried it."