Saskatoon woman lives in her own Barbie Dreamhouse

Andrea Katelnikoff has created her own Barbie world. She and her husband built a second floor onto their house to store her collection of 3,000 dolls.

Extension added onto home to store collection of 3,000 dolls

This story was originally published May 7, 2019.

Andrea Katelnikoff got her first Barbie In 1988. It was a Christmas gift from her husband, Garry. For her birthday the following year, she was given another one.

"It just kind of spun out of control after that," Andrea says.

Fast forward three decades. The couple now lives in a house with about 3,000 Barbie dolls.

"Most of them are in boxes, but I do buy at garage sales," she said of her ever-growing collection. "I bathe them and dress them up, do their hair, and then I put them in different places."

About 10 years ago, the Katelnikoffs decided to add a second floor to the house to accommodate the dolls. 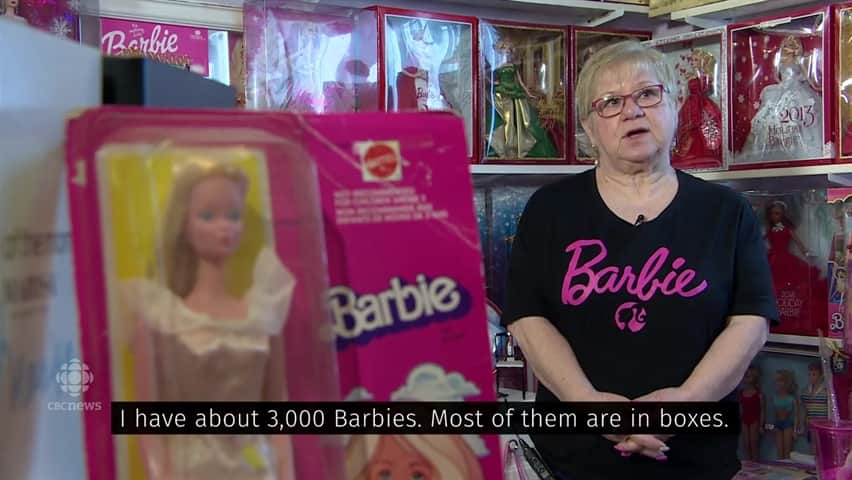 Saskatoon woman lives in her own Barbie Dreamhouse

2 years agoVideo
1:58
A Saskatoon woman's Barbie collection not only fills her heart — it fills most of her house. 1:58

Andrea, 66, had suffered a heart attack earlier that year.

"She just had a hatred on for the world so we decided with all her dolls and that, I figured I'd try to do something to get her going again," Garry said.

He said that wasn't the only reason the couple needed a change.

"Downstairs was dolls. I wanted my house back. I didn't want to see dolls all the time. So I said, 'Let's build.'"

The addition expanded their home by three bedrooms with about 700 square feet. That quickly filled up, leaving a majority of the main floor Barbie-less.

Most of Andrea's collection now lives on the second floor. In each room and along the hallway upstairs, the walls and furniture are draped with Barbie dolls and Barbie memorabilia.

There's even a Barbie-themed bathroom.

'It's a good investment'

Andrea was in her early 30s when she started the collection.

She said the dolls were a representation of things she didn't have growing up.

"I had five brothers, so it was all boys stuff ... then I had three [sons]. I needed something that was girlish, and here we are," Andrea said.

She isn't the only one behind the growth of the collection.

"I was probably more guilty than she was," Garry admitted.

He would often come home from work trips with upwards of a dozen Barbie dolls to add to his wife's collection.

"I figured, you know, it's a good investment," he said.

Victoria Dinh is a journalist with CBC Saskatoon. She is also a co-host, writer and producer of the CBC investigative podcast, The Pit. Get in touch with Victoria by emailing victoria.dinh@cbc.ca