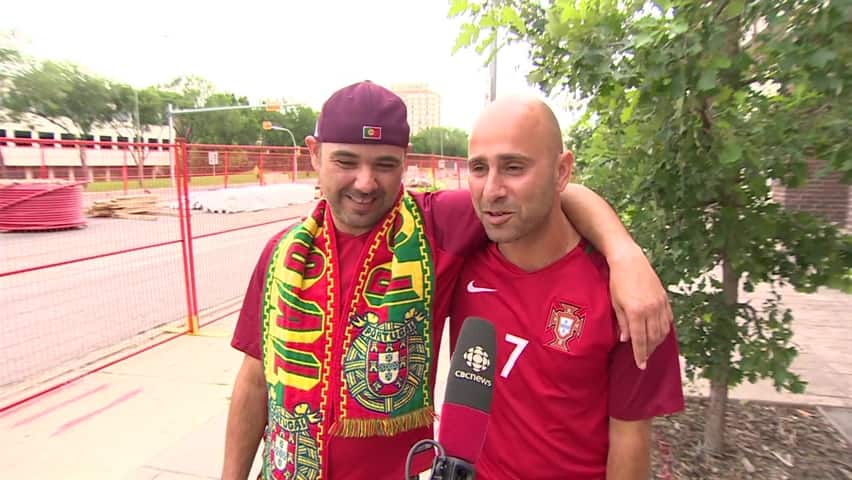 Over at The Lobby Public House in Regina, Jeff and Jason Silva stood and watched as Portugal's captain and international superstar Cristiano Ronaldo was stretchered off in the first half with an apparent knee injury.

The brothers were on pins and needles as the game crossed into extra time, before the game saw its first goal. In the 109th minute, Portugal's Eder cut through the French defense and struck a low shot from 25 metres past goalkeeper Hugo Lloris at the Stade de France.

The Silva brothers erupted at the pub and Eder's goal stood as the game winner.

"I'm used to being disappointed. I'm just so happy," Jason said. "We'll be wearing our jerseys for the next month or so."

Jeff told CBC he was in Portugal in 2004 when they hosted the tournament. It was also the last time Portugal was in the final.

"I'm a little emotional we've been waiting for Portugal to come through in a major championship," Jeff said. "I was there in 2004 when they lost to Greece, so to see them beat a team on their home soil, that's really big for us."
Over at Winston's English Pub and Grill in Saskatoon there were more French supporters than Portugal fans.

Kamil Rogowski has been following France throughout the tournament and he said the loss in the final came as a shock.

"I was surprised that Portugal won given the fact that they started off the tournament so badly, and they somehow managed to get through to the final," he said. "I'm shocked it ended the way it did."

When Portugal won <a href="https://twitter.com/Eurocup">@eurocup</a> our superfan said: Not one person made the difference but the team as one did! Today will be remembered for ever!

With files from CBC's Brian Rodgers