All 25 people on crashed Saskatchewan flight 'accounted for' but some require air ambulance, RCMP say

A West Wind Aviation plane carrying 22 passengers and three crew members crashed near the Fond-du-Lac, Sask., airport shortly after takeoff early Wednesday night, according to the RCMP. Several injuries were reported, but no fatalities.

No fatalities reported as of late Wednesday night, but some seriously injured in Fond-du-Lac crash

All 25 people onboard the West Wind Aviation flight that crashed shortly after taking off from the Fond-du-Lac, Sask., airport Wednesday night "have been accounted for and removed from the scene of the crash," the RCMP said late Wednesday.

There were no fatalities, RCMP added in a 10:30 p.m. CST news release.

"There was no explosion or fire. A number of people have suffered injuries, some serious enough to require air ambulance services which are currently en route," the release said.

The ATR-42 plane took off from the airport at around 6:15 p.m. headed to Stony Rapids. Onboard were 22 passengers and three crew members — two pilots and a flight attendant. 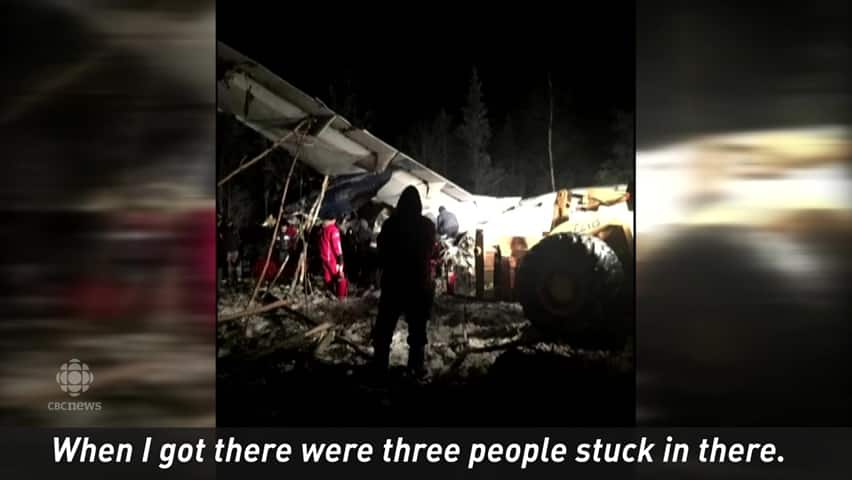 Raymond Sanger recounts the moments after a Fond-du-Lac plane crash.

3 years agoVideo
0:51
A West Wind Aviation plane carrying 22 passengers and three crew members crashed near the Fond-du-Lac, Sask., airport shortly after takeoff early Wednesday night, according to the RCMP. Several injuries were reported, but no fatalities. 0:51

Darryl McDonald of Louisdale, N.S., said both his mother Ernestine and sister Brenda were on the flight. They were travelling for medical appointments.

"Her face is all injured from impact," he said of his mother. "My sister, she's got cuts and possibly a broken leg. There was a young man with cerebral palsy. He was pinned but luckily they got him out."​

"I really feel anxious and unsettled," McDonald added. "I just hope and pray that everyone is OK."

Officers from Stony Rapids are helping at the scene alongside local emergency responders.

"Additional emergency/rescue resources are on the way to the scene from Royal Canadian Air Force and Search and Rescue," an earlier RCMP release said.

Fond-du-Lac resident Raymond Sanger, 57, was at the community's bingo hall with his son when a friend got a call about the crash.

The pair rushed out to the airport, following the screams of passengers to the crash site.

"We heard some noises of people screaming," said Sanger. "There's some women's voices.… We followed that voice until we got to the area where that plane was."

"They were all pinned inside between chairs and seats and all that," he said of the passengers. "We cut some metal and broke some metals so that we could get these people out."

Sanger's coat was drenched in airplane fuel by the time everyone was rescued and he got home.

"I'm just shaking," he said. "My coat is just soaked with airplane fuel. Everybody's like that, everyone who was there."

Ralph Goodale, the federal minister of Public Safety and Emergency Preparedness, tweeted about the rescue effort, lauding the first responders.

"I would like to convey our thoughts and hearts for those affected by this accident, and our appreciation for the efforts of local first responders," Transport Minister Marc Garneau echoed.

"We will cooperate fully with the Transportation Safety Board of Canada's investigation into this accident. Transport Canada is appointing a minister's observer who will keep me informed of the investigation's progress."

Investigators from the TSB are due in Fond-du-Lac Thursday morning.

RCMP members found the plane less than a kilometre from the airstrip. Fond-du-Lac is a remote fly-in community of about 900 people in the northern part of the province.

"At this time the cause of the accident is unknown and the Transportation Safety Board has been advised," Rick Philipenko, the chief financial officer of Saskatoon-based West Wind Aviation, said in a news release late Wednesday.

"The care of passengers and crew remain the priority."

Environment Canada's forecast for Fond-du-Lac Wednesday night called for cloudy conditions with a 30 per cent chance of flurries and a low of –19 C.

With files from Olivia Stefanovich and Janani Whitfield