Today, Mike Babcock received an honorary Doctor of Laws from the University of Saskatchewan for his outstanding achievements and exceptional service to the community.

NHL coach played for U of S Huskies

Even though he's become one of the most decorated coaches in NHL history, Mike Babcock has always maintained his prairie roots.

Today, Babcock received an honorary Doctor of Laws at the University of Saskatchewan convocation for his outstanding achievements and exceptional service to the community.

"I'm some excited to be here," he told the crowd. "I love Saskatchewan, and it's great to be home."

In his speech, Babcock said the U of S had been an important institution for his family. His mother, sisters, and many extended family members attended the university.

"The U of S, for our family, has been a platform for opportunity," he said. "It's special to be in a program that celebrates and pursues excellence."

Babcock said it was important that graduates not forget the lessons they pick up in university.

"You need to take that college pursuit with you into your life," he said. "That attitude, that curiosity. You need that to get where you want to go." 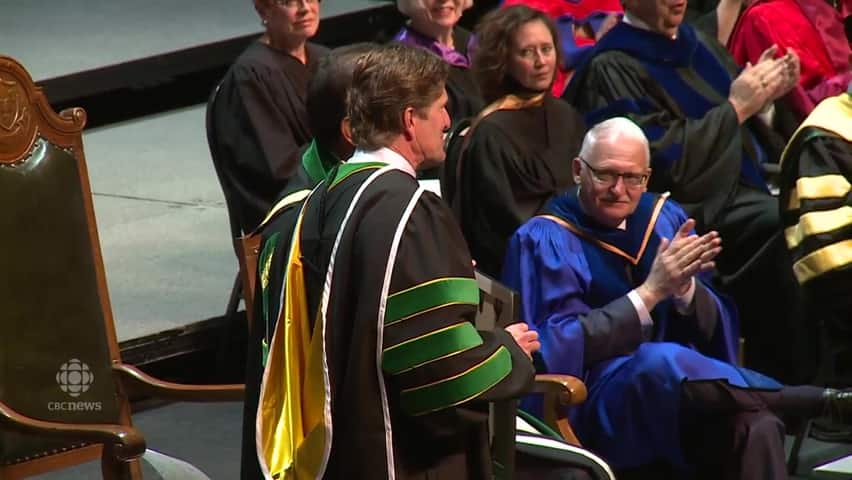 Mike Babcock gets honorary law degree from U of S

Family there in spirit

Speaking to CBC Radio's Saskatoon Morning, Babcock said though both of his parents have passed away, he believes they'll be at the ceremony in spirit.

"They really believed dreams came true through education," he said. "Obviously, they lived their lives here in Saskatoon and I'm proud to be from here. So, to be honoured in your hometown is a special thing."

Babcock has a storied career. He's the only coach in history to have won a Stanley Cup, an Olympic gold medal and a IIHF Ice Hockey World Championship.

"A couple of summers ago we lost two close friends to mental health and people approached me about getting involved," he said. "I have college-aged kids, and I could think of nothing worse than someone suffering in silence, being away from home suffering in silence and I just know there are so many people affected by it right now so I got involved to make a difference."

Meanwhile, Babcock said it's important that graduates not only focus on gaining a degree.

"Enjoy the journey," he said. "Everyone wants to get someplace, but to me it's not about the destination, it's about enjoying the process and maximizing every day."