'A long time coming': Joni Mitchell honoured in her hometown of Saskatoon

Joni Mitchell, 74, watched a livestream of the plaque unveilings Sunday at her home with tea and scones.

Mitchell, 74, watched a livestream of the plaque unveilings Sunday at her home with tea and scones

The Grammy-winning songstress was honoured in her hometown Sunday with the unveiling of two plaques and the naming of a prominent walkway along the riverside as the Joni Mitchell Promenade.

"This has been a long time coming," said former premier and emcee Lorne Calvert, adding that the location of the promenade is perfect because Mitchell wanted it to be a place that's "accessible to everybody."

Calvert talking now about how, in a conversation with Mitchell, she stressed how whatever place was dedicated to her be a place that’s accessible to everybody. “You got it just right” says Calvert of the promenade. <a href="https://t.co/yygAXtVIzy">pic.twitter.com/yygAXtVIzy</a>

Things kicked off at the Broadway Theatre for the first plaque unveiling.

The Broadway is located next door to a long-gone venue, the Louis Riel Coffee House, where Mitchell played her first paid gig and performed the ukulele on Hoot Nights in the early 1960s, according to the biography on her official website.

The plaque unveiling! <a href="https://t.co/aRQCzSPei1">pic.twitter.com/aRQCzSPei1</a>

Mitchell, 74, was not present but was said to be enjoying a livestream of the event at her home with tea and scones.

Fans went up to the livestream camera to say a quick hello.

Then the crowd walked or was bussed down the Broadway Bridge to River Landing, where the second plaque is located.

On the way down, I rant into Dianne Scaddan, who went to school with Mitchell and felt Sunday's events were a fitting tribute to her former schoolmate.

I got off bike to walk and talk over the Broadway Bridge with Diane Scaddan, who went to school with Joni Mitchell here in Saskatoon. Part 1 of 2 <a href="https://t.co/Njo6UUe7Rx">pic.twitter.com/Njo6UUe7Rx</a>

Part 2 of my walk-and-talk with Joni Mitchell schoolmate Dianne Scaddan. <a href="https://t.co/8E0foJzbIP">pic.twitter.com/8E0foJzbIP</a>

The route walked by Scaddan and others was meant to mirror the same one taken by Mitchell when she lived in the city.

"She actually used to continue on quite often to Riversdale Pool," said Aviva Kohen, director of media at Tourism Saskatoon, of Mitchell's walk through the area during some of her formative years in the city.

"[She said] it had the best jukebox in the city."

Things moved indoors at the Persephone Theatre while the second plaque remained covered up outside, due to the threat of rain — which never came.

"We'd hoped to be outside. But this is Saskatchewan," joked Calvert.

Inside, a band played Mitchell mainstays such as Both Sides Now.

“Both Sides Now” being performed inside the lobby. <a href="https://t.co/3mCfKNxSUZ">pic.twitter.com/3mCfKNxSUZ</a>

The Wild Horse Drum Group from North Battleford — where Mitchell's family lived before moving to Saskatoon when she was 9 — performed an honour song for her.

The Wild Horse Drum Group from North Battleford — where Mitchell and her family lived before they moved to <a href="https://twitter.com/hashtag/Saskatoon?src=hash&amp;ref_src=twsrc%5Etfw">#Saskatoon</a> when she was 9 — performing an honour song. <a href="https://t.co/orBKHlf7rV">pic.twitter.com/orBKHlf7rV</a>

Mayor Charlie Clark talked about Mitchell's song The Circle Game, its "carousel of seasons" and what the song meant to him.

"It's been 56 times times around the seasons since Joni Mitchell played at the Louis Riel Coffee House," he said.

Mayor Clark talks about what the song The Circle Game means to him. Includes a short pan to the camera that is live streaming this ceremony to Mitchell and other watchers. <a href="https://t.co/z6rynQ20WN">pic.twitter.com/z6rynQ20WN</a>

And with that, the walkway was pronounced the Joni Mitchell Promenade.

City councillors unanimously approved the naming of the promenade in April, capping years of efforts by Saskatoon to further honour the singer and one-time city resident.

Below, a brief history: 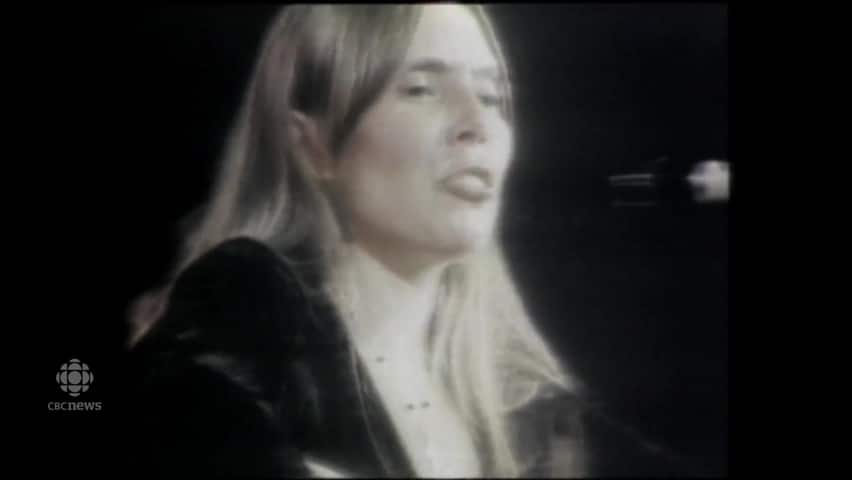 Joni Mitchell and Saskatoon: A History

You can revisit our live blog of Sunday's tribute below. Don't see it? Click here.