"We both looked at each other and we were like, 'Whoa, no.' And everybody just roared with laughter," recalls concertgoer Miriam Dreaver.

Comedian apologizes to those offended by provocative routine

That's how some attendees feel about a joke told Friday night by hosts Bruce Williams and Terry Ree at a tribute concert for the Humboldt Broncos hockey team.

Williams, one half of the long-standing and provocative comedy duo that bills itself as "The Indian and the White Guy," launched into a parody of American country crooner Luke Bryan's tune Country Girl (Shake It For Me).

The last line provoked a loud reaction from the audience.

"What?" Ree then responded in apparent mock outrage. 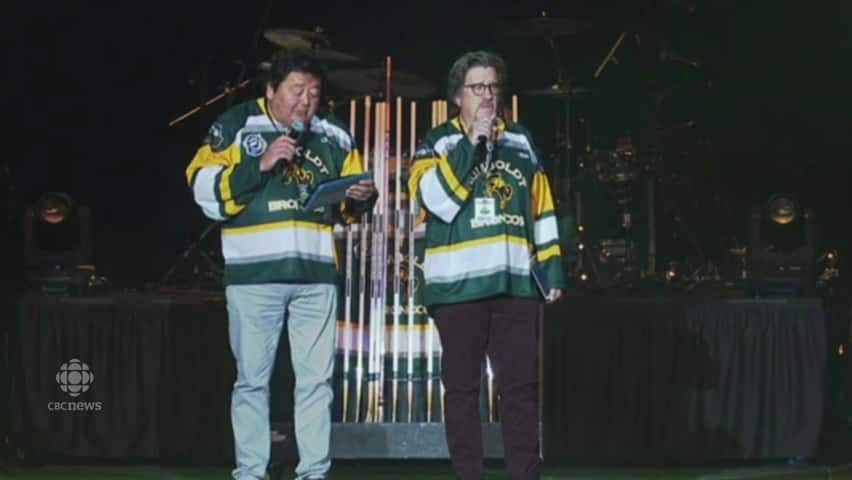 Miriam Dreaver was in the audience Friday alongside her friend Bernadette Anaskon.

Both had gone to the concert to show their support for the families of the people killed and injured in this month's fatal Broncos team bus crash near Tisdale, Sask.

The joke surprised and stung them.

"We both looked at each other and we were like, 'Whoa, no.' And everybody just roared with laughter," said Dreaver, a half-Cree, half-Irish resident of Saskatoon.

'Sorry if people were offended'

Williams apologized if anyone was offended by the joke, which he says the duo has performed for about five years without a single complaint.

"I don't want it to take away from the evening last night. That was magical. It was wonderful and I'm sick that one phrase from our show would taint that," he said.

The duo posted an illustration of a dove offering a peace branch along with a public apology on its Facebook page later Saturday evening.

Williams said he was singing the song to his longtime partner Ree.

"It's referencing him and him only," he said. "Our intent is to call attention to ongoing, rampant racism in all corners of America and North America by injecting cutting edge humour along with music and harmony," he added.

He and Ree, who is Indigenous, warn all their audiences that their act is not politically correct, Williams said.

"If we shook up some people and got them talking about issues affecting local minorities, then that is the definition of raising awareness. We certainly do not want one joke or comment to colour this event and all of the healing and incredible giving spirit it evoked."

Anaskon admits she didn't know about the act and their routines before seeing them Friday, but she says it takes a lot to shock her.

"I'm all about Native humour but there's a time and place for it all. Last night wasn't the place," she said.

Country Thunder Music Festivals, which organized the concert, said it had not received complaints about the joke.

"Williams and Ree are veteran comedians who are approaching their 50th year in show business," Gerry Krochak, director of marketing and media relations for the organization, wrote in an email to CBC News.

"I guess it's true that not everyone is going to appreciate every joke and I'm sorry if anyone has been offended in any way during what was a spectacular evening."

Krochak added that Williams and Ree, who have hosted many Country Thunder events and wore Humboldt Broncos hockey jerseys Friday night, typically get "huge laughs" when parodying the Bryan tune.

'Takes our whole nation back a few steps'

Other people who heard the joke Friday night expressed their disappointment on social media.

Ashley Hricz, writing to Country Thunder on Facebook, said the joke "appalled her" during what was an otherwise "amazing" event.

"When we are in an era when people are tirelessly trying to promote truth and reconciliation and then 'entertainers' come on the stage and joke about historical issues with the First Nations people, it takes our whole nation back a few steps," she wrote.

Plains Cree comedian and author Dawn Dumont recalls thinking, "you know, that's the kind of material they do," when she heard about the negative reaction.

But she also understands why some took offence.

"In humour, what you don't want to do is punch down," she said. "And Indigenous people, obviously, they have a lot more challenges that they face because of racism in society. So you really don't want to be perpetuating a really negative stereotype."

Moments after the joke, Dreaver recalls looking at Anaskon and the other audience members around them.

"There were people looking at me to see my reaction, laughing, like they were laughing looking like, 'Ohhhhh,' and they were like watching my reaction to see what I would do," said Dreaver.

The pair dumped their beverages in the garbage and left.

"I felt like the joke was on us," said Dreaver. "It just felt very inappropriate at this time because Saskatchewan is all hurting right now."