The man charged in a fatal Saskatchewan highway crash between a semi-trailer truck and the Humboldt Broncos team bus is not believed to have been distracted by a cellphone at the time of the crash, according to a document. Jaskirat Singh Sidhu has pleaded guilty to 16 counts of dangerous driving causing death.

The semi-trailer truck involved in the Humboldt Broncos team bus crash was travelling at nearly 100 km/h at the moment of impact, and the semi's driver isn't thought to have been distracted, according to a document obtained by CBC News.

The document has not yet been presented to the court.

"No tire skid marks due to braking were left by the semi-tractor unit," reads a draft statement of facts agreed to by the Crown and defence in the court case of semi driver Jaskirat Singh Sidhu.

It says Sidhu simply "failed to recognize that his vehicle was approaching an intersection and did not heed the stop sign."

On April 6, 2018, there was a collision between the Humboldt Broncos' tour bus and the truck Sidhu was driving. The team was travelling to a playoff game in Nipawin, Sask. Sixteen people died and 13 were injured in the crash. 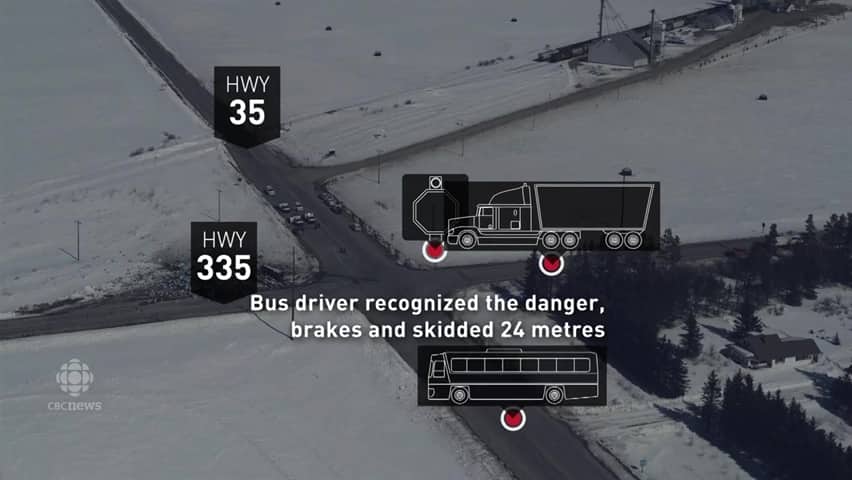 2 years ago
0:33
A draft statement of facts, which has yet to be presented in court, has been obtained by CBC. It details the events that led to the Humboldt Broncos' team bus crash on April 6, 2018. 0:33

It states Sidhu drove into the intersection at a speed of 86 to 96 km/h. This was despite a 1.2-metre-wide (four feet) stop sign with a red flashing light on top, as well as clearly marked highway signs warning of an intersection from approximately 400 metres, 300 metres, 200 metres and 100 metres away.

As Sidhu approached the intersection on Highway 335, the driver of the Broncos bus travelling down the larger Highway 35 recognized the danger, according to the statement.

The bus driver applied the brakes and skidded for 24 metres before the collision, it stated.

"The driver of the bus did not contribute to the collision," it stated. "The actions of Mr. Sidhu while operating the semi-tractor unit caused the collision."

The bus "T-boned" the semi, sending it into the ditch.

According to the statement, there were no environmental factors causing the crash such as sun glare or weather conditions. The nearby trees did not obstruct the view and were "inconsequential," it stated.

The document notes alcohol and drugs were not a factor. Sidhu was also not distracted by cellphone use. 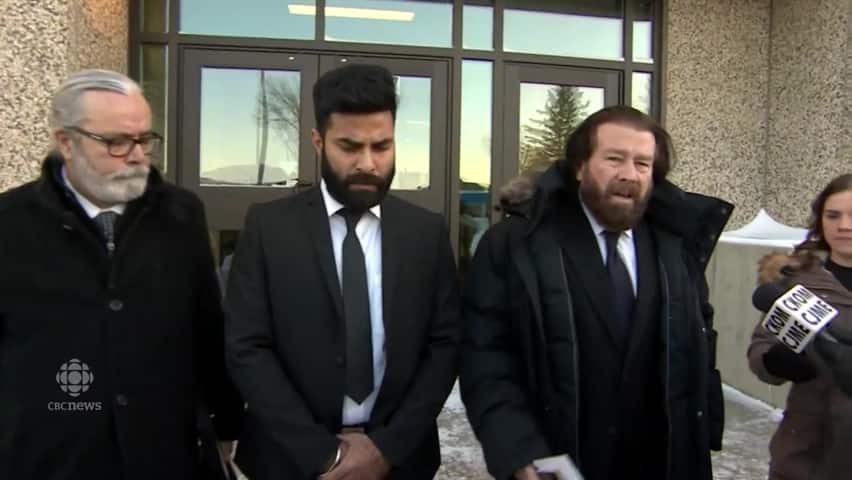 'I don't want to make things any worse': Lawyer for Jaskirat Singh Sidhu reads from a prepared statement on behalf of his client

Outside the court, Sidhu's lawyer read a prepared statement, saying his client feels terrible and is very sorry.

"His position to me was, 'I just want to plead guilty,'" said lawyer Mark Brayford.

"Mr. Sidhu advised me, 'I don't want to make things any worse.'"

The lawyer went on, stating that Sidhu is devastated by the grief he's caused the families.

"He's overwhelmed by the expressions of sympathy and kindness that some of the families and players have expressed to him, in spite of the fact that their grief is entirely his fault."

Judge Inez Cardinal said sentencing is scheduled to begin Jan. 28 in Melfort and will likely take three to five days to complete, due to the number of victim impact statements expected to be entered. Security screenings will be in place for everyone entering the building. 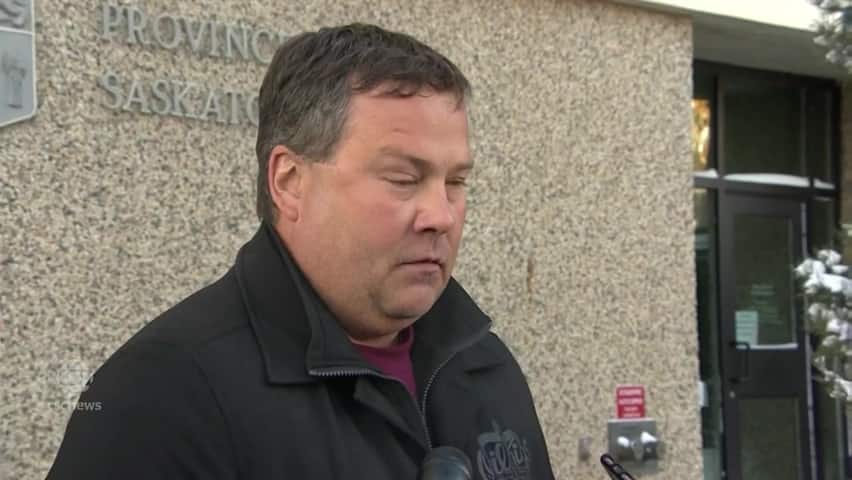 2 years ago
0:25
Scott Thomas lost his son Evan in the highway crash between a semi-trailer and the Humboldt Broncos team bus. 0:25

"He didn't set out that day to do this," Straschnitzki said. His son Ryan was paralyzed from the chest down in the crash.

"By him pleading guilty to save of us all from the trial shows a lot of remorse, because he also has to live with this for the rest of his life too."

"It means a lot," he said. "To hear him use his own words to plead guilty was powerful."

Thomas has been present for many of Sidhu's court dates. On Tuesday, Thomas sat close to him in the courtroom.

Thomas said he wasn't concerned about the length of Sidhu's sentence.

"If he spends 10 years, [that] time is irrelevant. He was guilty, and he acknowledged that."

Thomas would also like to see a permanent memorial set up at the crash site. Since the collision, many people have laid wreaths and other memorials at the site.

"Whatever they build there will be impressive and heart-wrenching," he said.

"I think it's going to be a place where people stop for eternity, because it's hallowed ground. Sixteen people were wiped off the face of the earth."

In a statement, the Humboldt Broncos hockey team said it was relieved Sidhu pleaded guilty and there would be no trial.

"I commend Mr. Sidhu for taking responsibility for his actions and sparing the survivors and the families the anguish and turmoil of rehashing this tragedy in court," said team president Jamie Brockman.

The crash occurred at the intersection of two busy highways. The Saskatchewan government has since pledged to install rumble strips, lights, signs and road markers in the area.

The accident made international headlines, and support for the junior hockey team poured in from around the world. A GoFundMe campaign raised $15 million that was eventually divided among victims and their families.

Sukhmander Singh, owner and director of Adesh Deol Trucking Ltd. and Sidhu's employer at the time of the crash, faces eight counts of failing to comply with various safety and log-keeping regulations.

Sidhu, who was not hurt, was released on $1,000 bail in July under conditions that he not drive and that he surrender his passport.

With files from CBC's David Shield