The truck driver who caused the deadly Humboldt Broncos bus crash a year ago was sentenced to eight years in prison when he appeared in a Melfort, Sask., court Friday.

The truck driver who caused the deadly Humboldt Broncos bus crash a year ago was sentenced to eight years in prison when he appeared in a Melfort, Sask., court Friday.

On April 6, 2018, Sidhu failed to stop his semi-trailer truck at a highway intersection, killing 16 people and injuring 13 on the bus carrying the Broncos junior hockey team and others en route to a playoff game.

Judge Inez Cardinal empathized with the victims' families as she read out her sentencing decision.

"Most find the pain unbearable," she said. "Families have been torn apart."

Cardinal said no case in Canada resembles this one due to the staggering number of dead and injured. She said she knows this has been difficult, but hopes Sidhu and the victims' loved ones can now heal.

She also noted that a just sentence was important to establish public confidence in the system.

Families burst into tears after the sentence was delivered. Some immediately walked out, while others stared at the judge's empty seat at the front of court.

'Hole in our lives'

Chris Joseph, former NHL player and father of deceased player Jaxon Joseph, said the judge made a reasonable decision. But nothing is going to bring his son back.

"I knew I was going to be disappointed no matter what," he said. "There's no number that would have made me happy."

Joseph told reporters he and his family vow to campaign to make the roads safer.

"We're not getting Jaxon back, so we want to create change," he said. "That's what we will be focusing on from now on going forward, because that's all we have."

Meanwhile, Toby Boulet, said the death of his son Logan has caused irreparable mental and physical anguish for the rest of his family's life.

"We have a hole in our lives until we also pass," he said. "We're searching somewhere, somehow for the new normal. And we're continuing to do that."

Boulet's son had told his parents he wanted to become an organ donor when he died. What became known as the Logan Boulet Effect spread across the country as nearly 100,000 Canadians signed up to become organ donors after hearing he had signed his own donor card.

"We want people to become organ donors," he said. "We're not done. We're all in."

Ultimately, he said it's difficult to forgive the man that killed his son.

"We do believe that Mr. Sidhu is remorseful," he said. " But the bottom line is that he was negligent and caused the death of my son and deaths of 15 other people."

Outside of court, Sidhu's uncle read a statement to reporters, expressing their sympathy to the families and the understanding they have shown throughout. 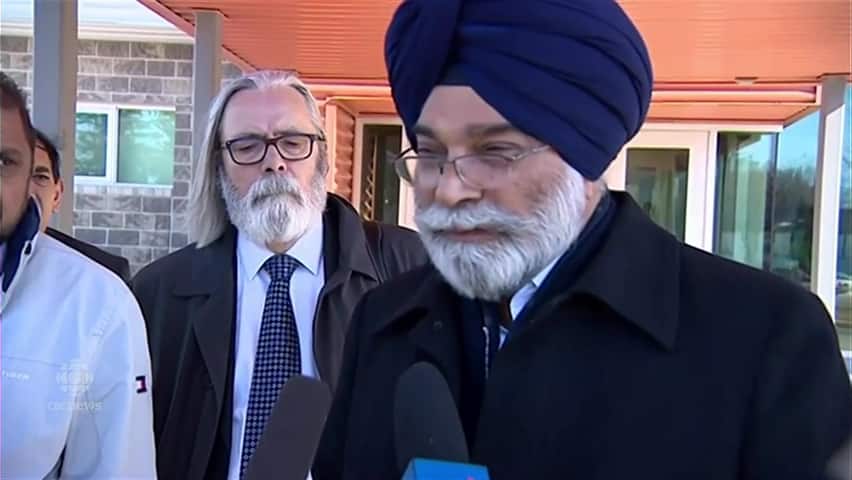 Chanan Singh Sidhu, uncle of truck driver Jaskirat Singh Sidhu, expressed his family's 'sincere sympathy' to the families of those killed and injured in the Humboldt Broncos bus crash

2 years ago
0:58
Chanan Singh Sidhu, who lives in Britain, thanked Canadians for their 'support, sympathy and understanding'. 0:58

According to an agreed statement of facts, Sidhu was solely responsible for the crash.

A forensic collision report found he didn't brake at the intersection of Highway 335 and 35 before hitting the bus.

The report said Sidhu's view of the intersection was not impeded by any environmental factors like trees near the road or sun in his eyes.

In court, the judge noted that Sidhu was preoccupied with a flapping tarp covering his truck's load and failed to notice road signs. She said a person is not innocent simply because the consequences of their actions are not forseeable.

She said Sidhu had many chances to stop but didn't, and said it was inconceivable he missed the intersection's many large signs, including flashing lights.

In a statement, the Humboldt Broncos said the team is thankful that the matter is over and that Sidhu is being held to account for his actions.

"This past year has been extremely difficult," said team president Jamie Brockman in a news release. "Having this legal matter settled and the sentencing complete is a big step in the healing process for the survivors, grieving families, our organization and the community of Humboldt and surrounding area."

He said it wasn't a case of momentary distraction, noting there were four signs in advance of the intersection, as well as a large stop sign with a flashing light. A car was also stopped directly across from him on the highway, waiting for the Broncos bus to pass.

The courtroom was set up in a school gymnasium to accommodate a large crowd. Before court opened, Bronco supporters handed out packs of tissue to families in the gallery, many of them wearing team jerseys with their loved ones' name on the back.

One of Sidhu's lawyers, Mark Brayford, cited dangerous driving cases with sentences of 18 months to four years, but didn't make an explicit recommendation.

More than 90 victim impact statements were presented to the court by friends and families of victims during an emotional week-long sentencing hearing.

The emotional statements detailed the anguish families have gone through over the past year. While some families said they forgive Sidhu for his role in the crash, others said they would never be able to.

Sidhu lived in Calgary and was working for a Calgary-based trucking company at the time of the crash. The owner of the company, Sukhmander Singh faces eight counts of failing to comply with safety and log-keeping regulations.

According to his lawyer, Sidhu had started working for a small trucking company three weeks before the crash. He spent two weeks training with another person in the vehicle and spent the final week driving alone.

Because of the crash, the Saskatchewan government has promised to make several changes to the intersection where the crash occurred, from rumble strips to better signage. It also pledged millions for improvements at other intersections.

At the time of the crash, training for Canada's 300,000 semi drivers had been optional everywhere except Ontario.

Broncos parents, families of other victims, academics, and drivers themselves petitioned and pushed for change. Training became mandatory in Saskatchewan last week, and will become mandatory across Canada in 2020.

It's likely Sidhu will be deported. He grew up on a farm in India and followed his girlfriend to Canada in 2013 and is a permanent resident, not a citizen of Canada.

Under federal law, a permanent resident convicted of a crime that holds a maximum sentence of at least 10 years may be deported.