A Grade 1 class at Delisle Elementary School is filled with a group of stand-up students — literally. 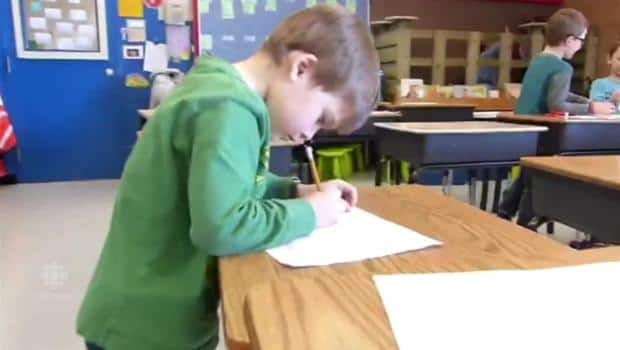 The children don't sit in chairs. They do their school work at stand-up desks.

Their teacher, Justin Sauer, was researching standing as a way to rehabilitate his own injuries. That's when he discovered that standing has health benefits for kids, too.

So he decided to give it a shot in September. ​

Sauer, along with education associates Teresa Shirley and Connie Schnizler converted older desks in storage into standing desks to see if it would improve the children's health and boost performance in class. So far, they're seeing results.

"Three different families told me how their kids were sleeping better, going to bed easier and sleeping through the night better," Sauer said. "About half of the parents made a point of mentioning how they were supportive."

The teacher in the community of Delisle, about 43 kilometres southwest of Saskatoon, said his students are more attentive and engaged in class.

The kids still have the chance to sit and move around throughout the day. However, they like standing.

"It's kind of fun and it kind of makes us listen more better and stuff," six-year-old Dillon Wawryk said.

"When you stand, it gets your legs stronger, and I like the feeling," seven-year-old Rowan Walker said.

Sauer hopes other teachers will follow his example and make simple changes, but he said he hasn't heard from any looking to make changes yet.

On mobile? Try our poll about stand-up desks.