The volunteer fire chief of Loon Lake, Sask., says criticism directed at his crews for not responding to a house fire that killed two toddlers on Makwa Sahgaiehcan First Nation is unfair. 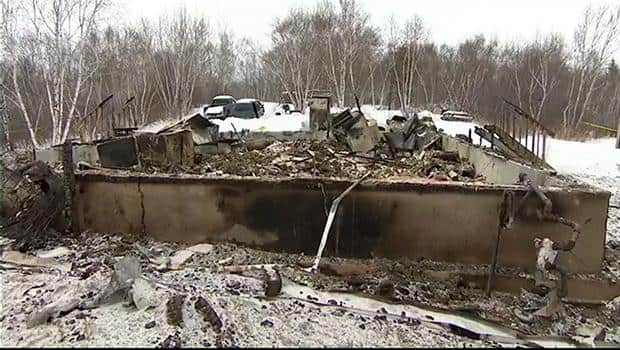 Larry Heon, the volunteer fire chief of Loon Lake, Sask., is rejecting criticism directed at his crews for not responding to a house fire that killed two toddlers on Makwa Sahgaiehcan First Nation.

The fire chief told CBC's Saskatoon Morning host Dan Kerslake that the town of Loon Lake cancelled its contract to provide fire-fighting services to Makwa Sahgaiehcan last May because the reserve had unpaid bills.

How do I protect the rest of the community if I burn everything, my resources, and not get paid for it?— Loon Lake volunteer fire Chief Larry Heon

Heon became emotional when asked about the criticism his fire department is receiving.

"I spent 23 years in the military to protect people in this country," he said. "And now to have this thrown back at me that we just let people die in my own country is very saddening to me."

However, Chief Richard Ben of Makwa Sahgaiehcan said the First Nation pays the fire department after the fact.

"It was more or less they come and we pay them and that was it," he said.

"I'm pissed off because we've always paid them," he said. "They can't say we haven't put thousands of dollars into that department. And they've always showed up at every incident. We're just pissed off."

The fire department and the First Nation had an agreement that fire bills were to be paid within 30 days.

Heon, who is also the mayor of Loon Lake, invited the chief of Makwa Sahgaiehcan to see all the paperwork showing the reserve's history of unpaid bills.

Heon said he received a 911 call from the reserve early Tuesday morning and did not respond to the scene.

"What went through my mind?" he said. "Protocol. I just thought about it and we do not respond to fires at Makwa Sahgaiehcan right at this present time."

Heon said the fire department has a small operating budget.

"We have a very small department. How do you operate?" he said. "How do I protect the rest of the community if I burn everything, my resources, and not get paid for it?"

House was engulfed in flames when RCMP members arrived

RCMP were first to respond on the scene. Heon said he's not sure how much help fire crews would have been because they normally arrive 10 to 15 minutes after RCMP officials.

Loon Lake is a village of about 400 people and the Makwa Sahgaiehcan First Nation has reserve land adjacent to the community.

RCMP said officers were dispatched around 1:30 a.m. CST, where they found a home engulfed in flames.

They said a man, who had gone to the home and found it was on fire, came out carrying two small children.

According to RCMP, the man was the father of the two-year-old boy and one-year-old girl who died at the scene.

On Wednesday, RCMP said they investigated a complaint of an alleged threat, directed at Loon Lake's fire chief on Facebook. They said a 27-year-old was arrested and charged, but the precise charge was not immediately available. The man was released and has a court appearance set for March 26.