They lost 4 loved ones. Now they want all victims of drunk driving remembered 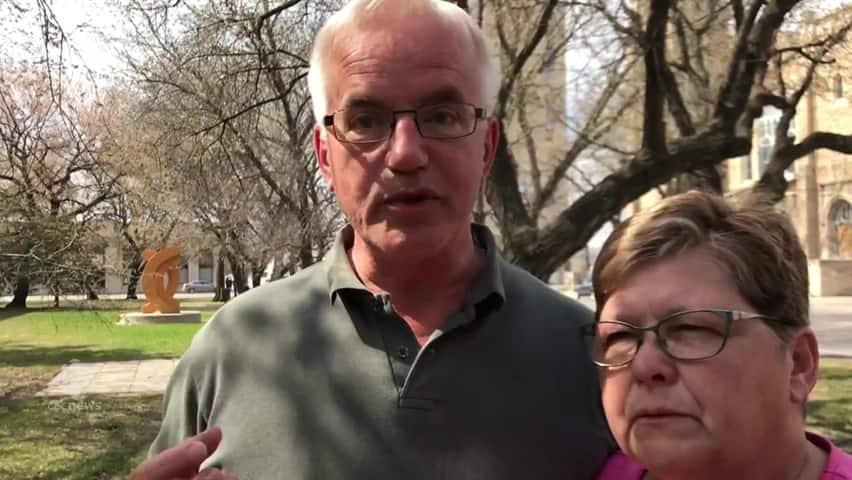 3 years agoVideo
1:18
Lou and Linda Van de Vorst on a provincial memorial for the victims of drunk driving 1:18

The tragedy of their son's death will never leave Linda and Lou Van De Vorst, but the Saskatoon couple hopes they can leave something useful behind.

The Van de Vorsts are part of a group that wants to erect a permanent provincial memorial site for all victims of drunk driving incidents in Saskatchewan.

In 2016, the couple lost their son, daughter-in-law and two grandchildren in a collision in Saskatoon.

A woman with a blood-alcohol level three times the legal limit failed to halt at a stop sign at Wanuskewin Road and Highway 11 and collided with the car carrying the family of four.

'Way out in the open'

The Van de Vorsts spoke to CBC News on a shaded, tree-filled patch of grass north of Saskatoon's city hall building, near the corner of 24th Street E and 4th Avenue N.

That's where they, along with Mothers Against Drunk Driving (MADD), want to place benches encircling a flower bed, plus a masonry wall bearing the engraved names of those killed or injured by drunk drivers.

"Way out in the open, so people can see it," said Lou.

The Van de Vorsts' loved ones — their son Jordan, his wife Chanda and the couple's children, two-year-old Miguire and five-year-old Kamryn —  were four of the 57 people killed on Saskatchewan roads in 2016 in incidents where alcohol was involved, according to Saskatchewan Government Insurance.

That was up by three deaths compared to 2015.

"The memorial here will be a good reminder and, if I can say, a teaching tool to other people to see what can happen when someone is impaired and goes behind the wheel," said Linda.

"And hopefully there won't be many more names added to the memorial."

Lou said the idea for the memorial originally came from Kenaston, Sask., resident Al Kerpan, a former MP and MLA.

Kerpan and his wife Melanie lost their 25-year-old daughter Danille Kerpan in 2014 when her car was hit by a drunk driver about 100 kilometres southeast of Saskatoon.

"The whole idea of [the memorial] being downtown is so that it's not hidden, to help inform people of the severity of impaired driving crashes and how much it affects so many people in terms of people dying, people injured," said Lou.

The Van de Vorsts also hope the memorial gets people thinking about how to properly plan for a night out when drinking is involved.

"Give yourself an idea of how to get home," he said.

Kiwanis Memorial Park initially came up as a potential location for the memorial.

But the city has recommended against that location because it's already host to other landmarks, including memorials to Saskatoon residents who served during the Great War and Second World War.

The groups have settled on the below-pictured location near city hall.

That plan will be up for discussion Monday morning at city hall.

The Van de Vorsts hope to see the memorial up this fall.