The Canadian Pacific Railway train that derailed, leaked crude oil and ignited a large fire in rural Saskatchewan on Thursday was using new, industry-standard tank cars meant to be more puncture-resistant than their predecessors, the ones that exploded in Lac-Mégantic, Que., in 2013.

The Canadian Pacific Railway train that derailed, leaked crude oil and ignited a large fire in rural Saskatchewan on Thursday was using new, industry-standard tank cars meant to be more puncture-resistant than their predecessors, the ones that exploded in Lac-Mégantic, Que., in 2013.

Both CP and ConocoPhillips, which owned the bitumen on board, confirmed the train was made up of TC-117J cars endorsed by Canadian regulators in 2016.

"The 117Js are newly built," a ConocoPhillips spokesperson said. "[They] meet or exceed the standard required for crude transportation."

Footage from Thursday's crash site, west of the small hamlet of Guernsey, Sask., about 100 kilometres southeast of Saskatoon, shows large puddles of black sludge staining the prairie ground next to the train track that runs parallel to Highway 16. 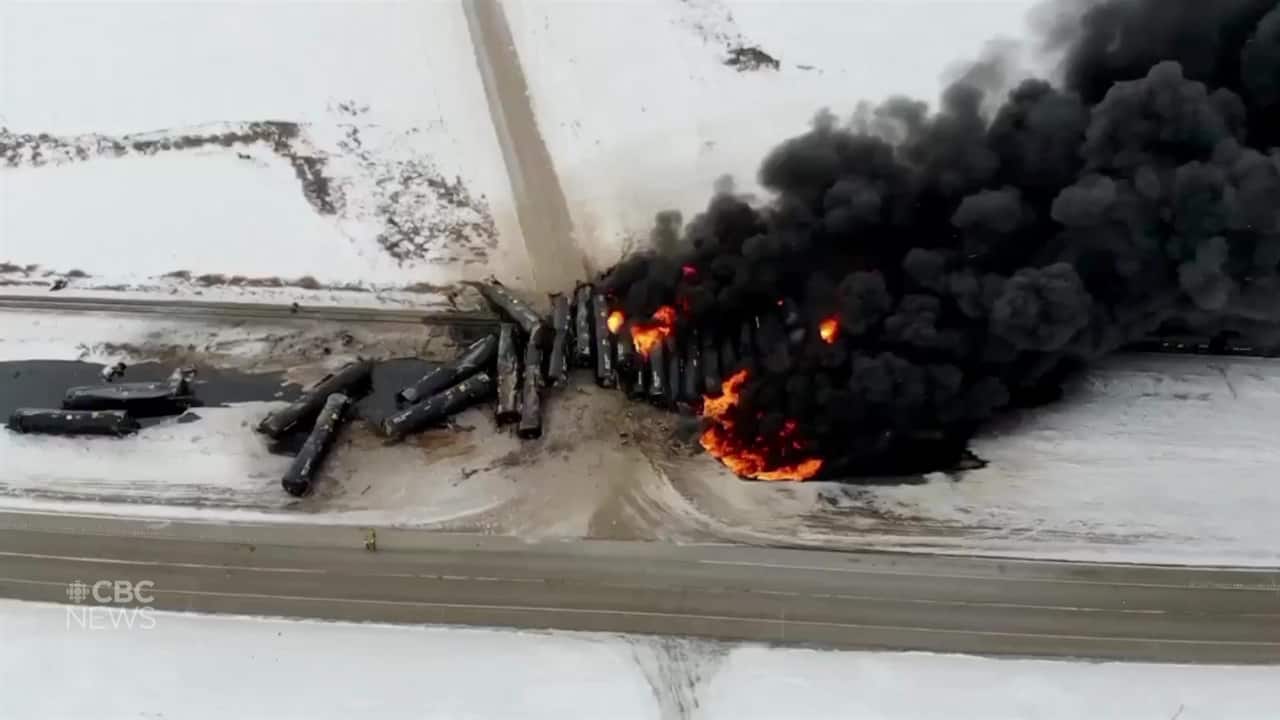 1 year ago
0:33
There have been no reports of injuries after a train derailed near a Saskatchewan hamlet. Emergency response says 12 of the 31 cars that derailed are on fire. 0:33

The Transportation Safety Board of Canada (TSB) is investigating the early-morning crash but has not yet released an estimate of the amount of oil spilled. Nobody was injured and there was no impact to waterways, according to CP Rail.

By 9 p.m. CST Friday — more than 36 hours after the train jumped the tracks — the fires were contained and the rail line's Sutherland subdivision was reopened to traffic.

According to CP, 32 of the train's tank cars had derailed.

That's just one car short of the 33 that derailed in a separate CP-Conoco crude oil train derailment in early December on the other side of Guernsey.

Approximately 1.5 million litres of oil leaked out of the train's tanks in that crash. That's more than six times the amount of product that poured into the North Saskatchewan River from a Husky Energy pipeline leak in July 2016.

The train that derailed in December used a mix of jacketed TC-117R cars and CPC-1232 cars, which are not quite the same as the new TC-117J tanks involved in Thursday's derailment.

TC-117R cars are older cars retrofitted to meet the same standards as the brand new TC-117Js touted by Transport Canada in the years following the Lac-Mégantic rail disaster. In that tragedy, an unmanned crude-carrying train derailed and exploded in the town's core, killing 47 people.

CPC-1232 cars are industry-sponsored and meant to be safer than the DOT-111 tank cars involved in Lac-Mégantic, according to the U.S. Bureau of Rail Statistics.

The shells on retrofitted 117R cars are slightly thinner than those on new 117 cars, according to Ian Naish, a former director of rail investigations for the TSB — as are the shells on jacketed CPC-1232s, according to the bureau.

In the wake of Lac-Mégantic, Transport Canada called for the new TC-117 rail cars to become the new standard for transporting flammable liquids. The cars feature several enhanced safety features, including:

Still, even with new TC-117 tank cars in use Thursday, "again the tank cars don't seem to be able to contain anything and they do pile up and there's big releases," Naish said.

"It does raise the question of how much better they perform in derailments than the other tank cars. Is there really much difference at higher speeds?"

Naish wonders at what maximum speed the new 117 cars can survive a derailment without a breach or serious leak.

It's not known how fast the train was going Thursday before it crashed; the TSB has yet to issue its first written update on the investigation. But the TSB has previously reported the maximum speed on that part of the line was 72 km/h.

Hours after Thursday's derailment, federal Transport Minister Marc Garneau ordered that all trains with 20 or more cars carrying dangerous goods must slow down their speeds for the next month.

For the Sutherland subdivision, Garneau's directive means a speed reduction of nearly 50 per cent.

Garneau's country-wide order is already expected to have broader impacts, such as longer wait times for car drivers at train intersections.

"I have asked my officials to examine all issues related to these accidents to determine if additional safety measures will be required."

ConocoPhillips said Friday it was closely monitoring the situation.

"The safety of the community and the protection of the environment is our primary concern," the company said.

Thursday's derailment re-stoked the political debate on trains vs. pipelines for transporting crude.

This is why we need pipelines

At least when trains full of oil derail or crash, we know right away and can start cleanup. Some pipeline leaking away for months or years in some remote corner of B.C. with only the word of the oil companies to say how bad it is? Let me think...

It also reinforced the possibility that such a fiery derailment could happen in a large population centre.

"We are aware that any derailment raises concerns for our citizens," Saskatoon Mayor Charlie Clark tweeted on Thursday.

Pamela Goulden-McLeod, the director of emergency management for the Saskatoon Fire Department, said the city has response plans in place for a potential "derailment emergency" within city limits.

"We've planned and collaborated with many agencies, including rail companies, for such an event," she said.

The City of Saskatoon has also expressed a desire to have rail lines moved outside of the city. An update on that effort is expected some time this year.