Not since a bus carrying Canadian Pacific Railway workers was involved in a three-vehicle collision near Swift Current, Sask., almost 40 years ago has the province witnessed as grave a death toll following a highway accident.

WARNING: This story contains descriptions of traffic accidents some readers may find disturbing.

The Humboldt Broncos bus crash last week quickly called to mind a fatal collision at the same intersection 21 years before.

But in its physical carnage on a wide-open stretch of prairie road and its sad toll — 16 people dead and 13 others injured — Friday's crash also evoked the deadliest Saskatchewan highway accident known to Saskatchewan Government Insurance, the province's auto insurer.

On a late-May afternoon in 1980, about 32 kilometres west of Swift Current, Sask., a bus carrying 31 Canadian Pacific Railway workers to a track-laying job site was sideswiped by a car.

The bus flipped on its side and was hit by a tanker truck carrying liquid asphalt. A fire broke out. 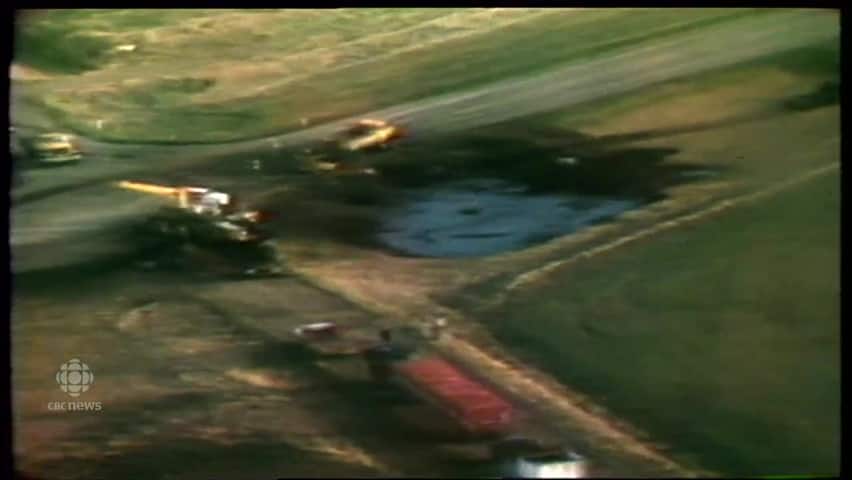 As with the bus taking the Humboldt Broncos to a hockey game last Friday, the roof of the bus carrying the CP workers was ripped off.

Some of the 22 wrapped bodies from the CP bus wreck, badly burned, were taken in the back of half-ton pickup trucks to a local hockey arena and temporarily placed at one end of the rink.

'Everybody' can relate, says premier

Whether made up of workers, sports teams or high school students, groups travelling together across remote stretches of prairie highway is an everyday experience.

That's why so many people can relate to what happened to the Broncos and their support staff on Friday, said Premier Scott Moe.

Moe's own brother skated in the Saskatchewan Junior Hockey League.

"I travelled the buses as a child," the premier said.

"Everybody across this province, I think, can relate to putting their child on a bus, whether it be for a hockey game, a soccer game."

For two teens killed on the road in 2007, it was a basketball game.

Several boys from Borden, Sask., aged 15 to 17, and one of their mothers were travelling in a minivan toward an exhibition game in Osler just over a week before Christmas in 2007.

As the van turned west off Highway 11, it got stuck on a patch of ice and was struck by a three-ton truck.

Sandon Sutherland, 15 and Greg Sargent, 16, were killed. Three other team members in the van were injured. 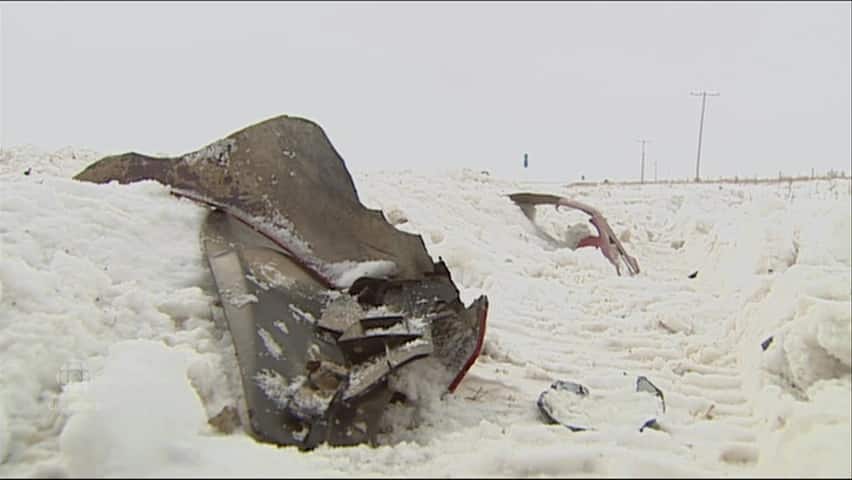 Semi-trailers like the one involved in Friday's Broncos crash are involved in fewer than a quarter of the fatal on-road collisions that happen in Saskatchewan every year, according to SGI.

The insurer says semis were involved in an average of 12.3 per cent of the fatal collisions from 2005 to 2016, the latest year for which SGI has such statistics.

The total number of semis involved in deadly accidents during that time frame is 286.

Not all those incidents involved other vehicles.

In 2012, a semi-trailer hauling pipes left Highway 11 near Saskatoon, rode off-road and slammed into a house in the city's Stonebridge area. That home and another burst into flames. 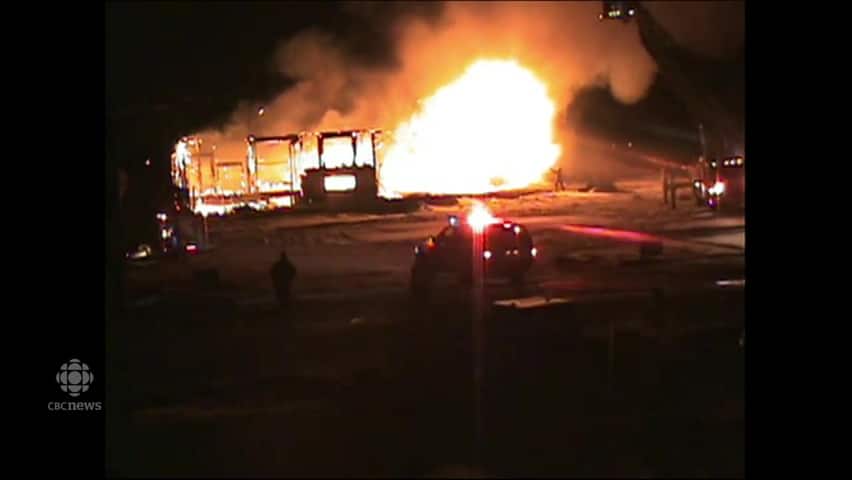 Friday's crash wasn't even the first one to involve a Saskatchewan hockey team called the Broncos.

On the second last day of 1986, a bus carrying players from the Swift Current Broncos was headed to Regina for a game against that city's Pats.

The bus left during a snowstorm and the roads were icy that day, according to a contemporary news report from CBC News.

A passenger told CBC in the crash's aftermath that he remembered the bus driver yelling "Hang on!" just before the vehicle slid off the road, wiped out several highway signs and flipped onto its side in a ditch just a few kilometres outside Swift Current.

Two dead passengers were thrown from the bus; another two were pinned underneath. Three other players were seriously injured, while others were treated at the scene and released. 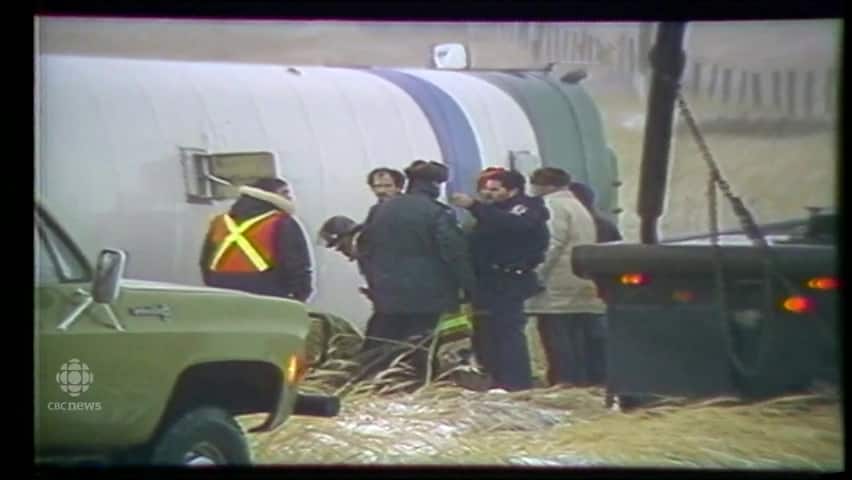 'Maybe now they'll do something'

Friday's bus crash near Tisdale, at the intersection of Highways 35 and 335, saw all 14 survivors sent to hospitals in Saskatoon and other unidentified areas.

The location immediately brought to mind a fatal collision at that same intersection in June 1997.

A pickup truck carrying a B.C. family — two parents and three young children, including a one-month-old baby girl, plus a woman from Saskatoon — collided with a semi-trailer.

The truck had failed to stop at the stop sign, police said at the time.

All six people in the truck, who had been travelling to Carrot River, were killed. 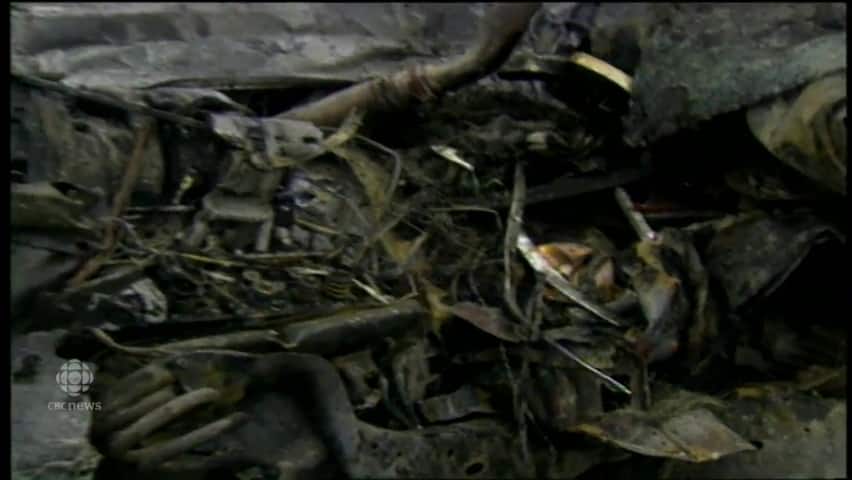 "By the time anybody else got there, it was just … the flames were going too fast," said Ginger Rogers, the owner of a nearby convenience store and one of the first people to come upon the scene.

Rogers told CBC that the juncture, called Armley Corner, was a busy one, but that those not from the area might not know that.

"Maybe now they'll do something about this intersection," Kelly said at the time, joining other locals calling for the addition of flashing red lights.

Those lights were added after the 1997 crash.

But after the Broncos crash — the seventh at the intersection since 1994 — local politicians and truck drivers familiar with the intersection are calling on the Saskatchewan's Ministry of Highways and Infrastructure to add more safety features to the area.

The ministry has launched its own internal investigation into the crash, and "any recommendations resulting from this investigation will be enacted as soon as possible," said ministry spokesperson Doug Wakabayashi.

Asked if it was possible for features to be added in the interim, Wakabayashi said, "We won't rule anything out, but a determination of major contributing factors is information that's critical to our work."

Garry Rogerson, a trucker with experience both in picking up California-bound peat moss from Carrot River and in driving through Armley Corner, said the glare from the sun for drivers heading westbound "is very bad at that time of day."

He said the "number one" thing the province should do is install traffic stop lights.