Hope, the afterlife and Indigenous knowledge: a conversation with Jane Goodall

“You just have to return to the Indigenous wisdom,” says Goodall of how we should make more sustainable choices in order to save the world.

Jane Goodall talks hope, sustainability and making a difference, one choice at a time

Ahead of her talk in Saskatoon, Jane Goodall took some time to take part in a live conversation with CBC's Madeline Kotzer and Canadians.

Goodall talked about her work with chimpanzees, animal research, hope, the afterlife and how Indigenous wisdom can help us all make more sustainable choices.

Madeline Kotzer: I'd like to go back to the beginning of your work with primates. The year is 1960, you're 26 years old, you have just arrived at the Gombe Stream Chimpanzee Reserve in Tanzania. What had you set out to do there?

Jane Goodall: Well, I went to Africa — saved up and got there — in 1957. I would have studied any animal, anything, and I met the late Louis Leakey, Dr. Leakey, and it was he who suggested that I would study chimps. Because, chimps are so close to us and he spent his life searching for the fossilized remains of early humans. And, so he felt that watching the chimps would help him understand, maybe how early humans had behaved.

MK: Your work totally changed the way humans view chimpanzees, and people who've written about your work say you're "the woman who redefined man," … why do they say that about you Dr. Jane?

JG: Because, the first chimpanzee who began to lose his fear of me — I called him David Greybeard, he had a beautiful white beard — and one day, I saw him, using piece of grass to fish termites from their nest. I saw him break off leafy twigs and use that as a tool, he had to strip the leaves. At that time, science thought only humans use and make tools. We were defined as man the tool-maker. So, when I sent a telegram to Louis Leakey, he said "we must redefine tool, redefine man or accept chimpanzees as humans."

MK: From your time working with chimpanzees, do you have a moment or experience that you cherish the most?

JG: There are so many, but I'll pick one, which is when the wonderful old female, Flo, she had a six-year-old daughter and a brand new baby son, and when the son was about eight months, just beginning to totter, he was curious and he came up to me, where I was sitting on the ground, and his mother was a bit nervous, she followed behind, she kept her hand around him but she allowed him to reach out and touch my nose. And, considering she'd been afraid of me for so many months, this was a big breakthrough and very amazing.

MK: How do you stay hopeful?

I truly believe only when head and heart work in harmony, can we attain our true, human potential.- Dr. Jane Goodall

JG: A lot of people don't understand why I have hope, because we're destroying this planet so fast, we're using up the finite natural resources faster than mother nature can replenish them. But, the reason I have hope is that we have a program for young people, it's call Roots and Shoots, it's in over 100 countries. It began in Tanzania — members from kindergarten to university, everything in between — and the main message of that is: Each single one of us makes a difference,on the planet, every single day, in the little choices we make. And, if everybody make ethical choices — what you buy, what you eat, what you wear — we'd be moving toward a better world. So, the Roots and Shoots choose three projects to make the world better, one to help people, one to help animals and one to help the environment. And, there's some much enthusiasm, and determination and the kids won't give up. So, they give me a lot of hope. They're changing the world.

MK: We have a comment and a question here from Russel Robinson, he says "You are one of the great heroes of making known the wonder of primates and the natural world! What is your next challenge?"

JG: Well, I guess, you know I'm 83 years old, so my next challenge will be, dying really. You know, when you die it's either, nothing, finished, or there's something. And, I believe there's something. Discovering that something will be the greatest adventure of my life.

MK: People, right now, who are watching you and are inspired by your words and who think "I really want to make a difference. How can we all? What are things we can do do contribute to living in a more sustainable way? A more harmonious way with nature?'"

JG: You just have to return to the Indigenous wisdom on making of making a decision based on, how will this help seven generations ahead? We tend to make decisions based on, how will this help me now? Or, my next shareholders meeting, or my next political campaign. And, so, if we think about the consequences of the little choices we make, was it harmful to the environment? Did it cause suffering to animals? Or, child slave labour, or something like that, think about those consequences and find a way to link our clever brain with love and compassion — the human heart. Because I truly believe only when head and heart work in harmony, can we attain our true, human potential. 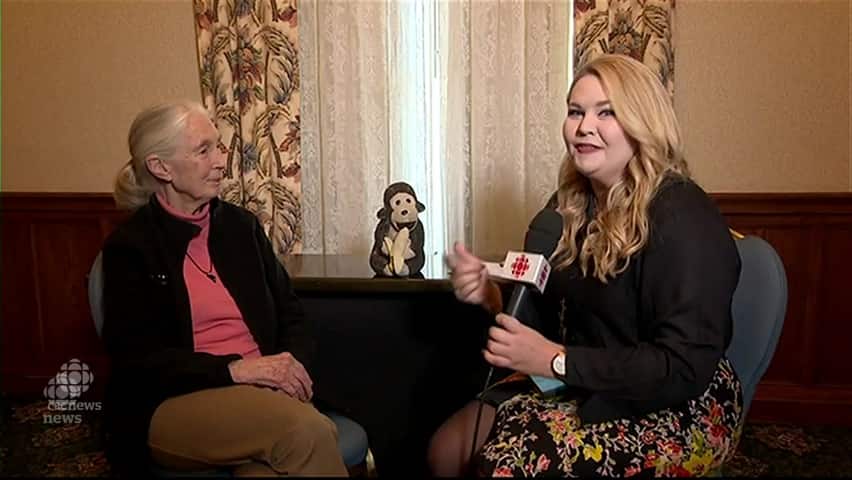