The video shows an officer punching Evan Penner several times and repeatedly telling him to stop resisting. That officer has been placed on leave, Saskatoon police Chief Troy Cooper says.

One officer has been placed on leave until review can be completed, police chief says

Members of the Indigenous Joint Action Coalition and Black Lives Matter YXE are calling for several Saskatoon police officers to be fired after a man was pepper-sprayed, repeatedly punched and tasered by police officers during an arrest over the weekend.

One officer has been placed on leave pending a review of his actions, Saskatoon police Chief Troy Cooper said in a news release.

The SPS said in the release it is treating this as "a critical and serious incident."

A video of the arrest shows a Saskatoon Police Service (SPS) officer struggling with a man on the ground, who has been identified by community members as Evan Penner.

The video shows the officer punching Penner several times and repeatedly telling him to stop resisting.

It does not show how the two men became physically engaged. 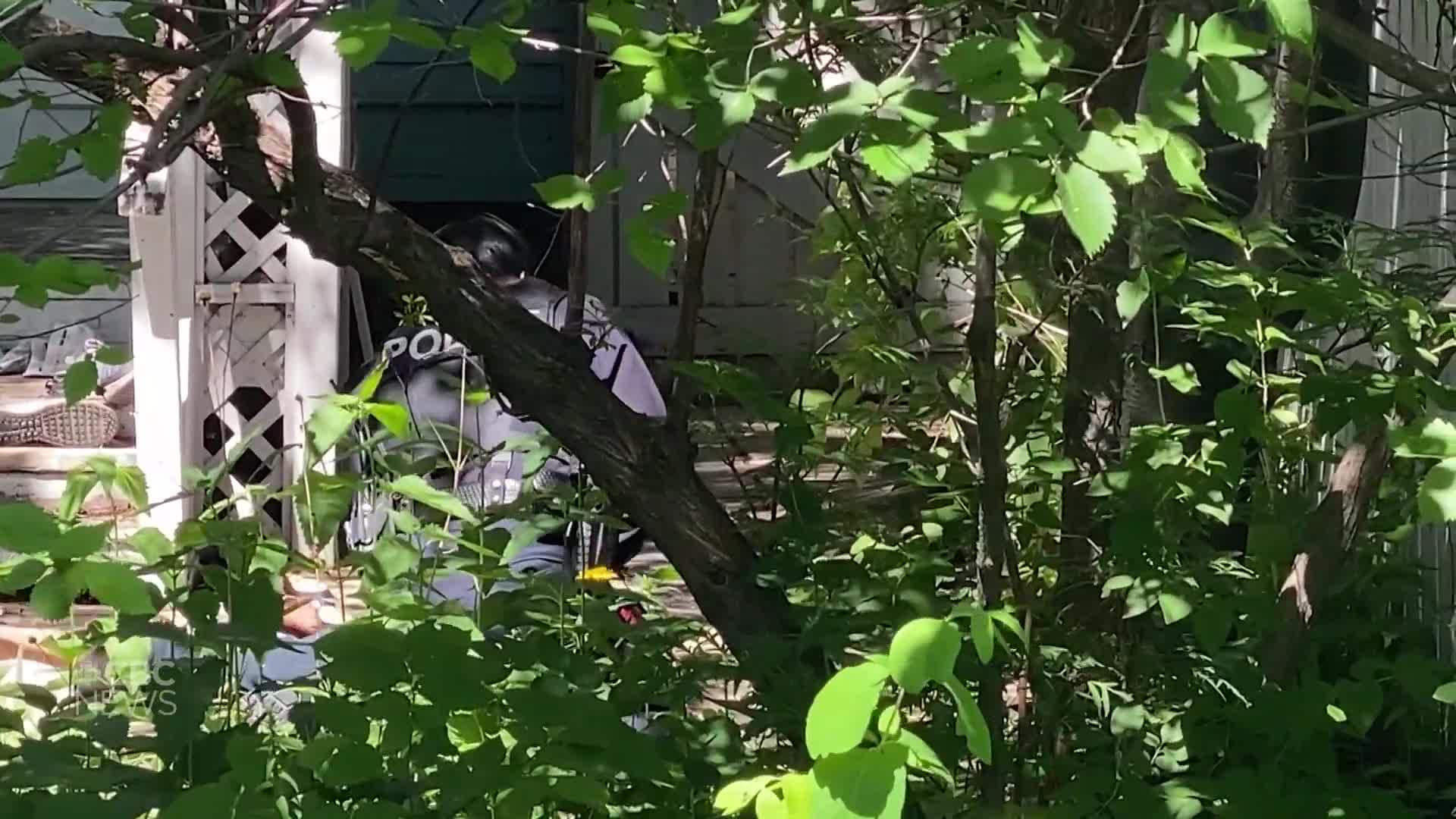 Saskatoon arrest video leads to calls for officers to be fired

4 months ago
5:39
A video of an arrest that took place July 4 in Saskatoon had prompted calls from advocates for officers to be fired. 5:39

The arrest happened shortly after 2 p.m. CST on July 4.

Heather Dimmick, who owns the Arrand Block apartment building on 11th Street East, said she called the Saskatoon police non-emergency line after a tenant reported to her that a man was using their garden hose to bathe in front of the building.

She said the tenant told her the man was acting erratically and was scared to leave for work with him present.

"I tried to get a hold of my caretaker, but there was no answer," Dimmick said. "I wasn't sure if maybe he was going to do some damage to the front of the building, especially with the new gardens out front and everything, so I actually called city police and talked to a constable there and she said she was going to send someone over right away."

Dimmick said the next time she heard from police was when a sergeant called looking to speak with the tenant who had notified her about the man.

The video shows Penner and the officer struggling for more than two minutes, during which the officer punches Penner several times. The officer is on top of Penner throughout.

"I'm not even doing anything," says Penner, who is screaming and struggling on the ground as the officer sits on his back.

About a minute into the video, the officer appears to gain control of the suspect, with the scene quieting down enough that sirens of responding police vehicles can be heard in the background.

"Why do you want to shoot me?" Penner says.

"I don't want to shoot you, man," the officer responds. "Just comply."

The officer remains on top of Penner and they talk. When Penner starts to move again, the officer again starts punching him again.

More officers arrive on scene, bringing the total to eight. One of the officers throws more punches. As officers tell Penner to put his arm behind his back, he screams "it's broken."

After police get Penner in handcuffs, the officers step back.

Penner has since been charged with resisting arrest, assaulting a police officer, disarming a peace officer, mischief and possession of a controlled substance. He made his first appearance in Saskatoon Provincial Court Monday morning via telephone. Court heard he had been in possession of diacetylmorphine, an opiate, when arrested.

One officer placed on leave

SPS said in a statement that the first officer seen in the video has been placed on leave until there can be an initial review of his actions and his use of force.

"I recognize this incident was a traumatic event for our community, for those involved and for those who witnessed it, said Chief Troy Cooper. "Whenever force is used, we are accountable and I want to assure the public that this is being taken seriously and we will do our utmost to be open and transparent as the investigation unfolds."

Cooper said the Saskatchewan Public Complaints Commission will be responsible for an independent investigation.

The arrest took place in the backyard of Lorraine Salt's Nutana home. She said she spoke with the man before his encounter with police and that he was calm and quiet when they spoke.

Salt said they first saw each other through a window.

"We chatted and to me, he looked like he was warm, it was a hot sunny day and he just needed to cool down in the shade and he did invite himself to sit on our porch," she said, noting the man was wet.

Salt said she decided to let the man be and returned inside of her home.

Salt said police told her that crystal meth was involved.

"He wasn't aggressive when I talked to him and I was quite concerned that there were that many police involved," she said.

Salt said the man left her backyard in a much different state than he had been before police arrived.

"It wasn't exactly a George Floyd situation, but the fact that earlier, the fellow, I looked him over and he was perfectly healthy and when he left his face was battered," she said.

Salt said her home sustained no damage that she was aware of.

Advocates call for police service to be disbanded

Erica Violet Lee, a representative of the Indigenous Joint Action Coalition, spoke to reporters outside of court after Penner's first court appearance on Monday.

"It's clear from the video that we've seen, that the the officers have no regard for this person's life. They have no regard for his pain that he is clearly in. He wasn't causing any disturbance," she said. "The reality is that Indigenous and Black people are routinely brutalized by police here in this with no accountability at all, so I believe the police should be fired."

She said she does not have faith in the process that Chief Cooper has started by notifying the Public Complaints Commission.

"When you ask the police to police themselves, the outcome will always be disappointing," she said.

"We can not reform a system that is built on white supremacy and colonialism," the statement said.  "As a community, we must dismantle this oppressive system and build democratic and co-operative structures that serve and protect all members of Saskatoon's diverse population."

"Instructors emphasize the use of verbal de-escalation techniques and how they fit into potential use of force situations," the statement said.

It said the SPC instructs students on tactical considerations they have to take into account when using force.

"The decision to use force is based on a spectrum that ranges from behaviour that is co-operative to behaviour that has the potential to cause grievous bodily harm or death," the statement said.

It said incidents where force is used are reviewed by the relevant police service "to ensure they fall within the acceptable guidelines."

'He wasn't hurting anybody,' says man who shot video

Frank Collins, the area resident who shot the video of the arrest, said he never felt the officer did not have control of Penner, as he was on top of him the entire time

Collins said it's not uncommon for people to wander through other people's property, saying it is normal, "especially during the summer."

"He wasn't hurting anybody, so what's the harm?" he asked.

Collins said one of his largest concerns is that Penner was not treated by paramedics until after he had been "thrown" into the back of the police car. He feels Penner should have been the priority patient, as he had sustained the most injury.

"About 10 minutes, I would say, elapsed before anybody opened the door to check on Evan to see if he was OK," Collins said. "Ten minutes is a long time to leave somebody unattended and not even to check to see if they're OK."

The Saskatoon Police Service says Penner sustained "a non-life-threatening injury to his face."

Police also say he was assessed by paramedics at the scene and was observed while in custody by the on-duty paramedic in detention.

Penner was released on bail Monday morning. He's set to be back in court on Aug. 18.

Saskatoon Mayor Charlie Clark said in a Facebook post Monday he had viewed the video and said it emphasizes the need for responders, other than police, to respond to situations where mental health issues are core.

"We also need to openly and honestly review the dynamics of police training, de-escalation and use of force — particularly with Black, Indigenous and People of Colour — to ensure that the public has confidence in the system," Clark's statement read.