Employers need to get serious about preventing workplace injuries in the home during pandemic, expert says

Canadians working in improvised workspaces in their homes are beginning to get neck, back and shoulder pains. A Regina chiropractor has dubbed it "work-from-home syndrome" and warns that employers need to get serious about preventing workplace injuries in the home.

As Canadian workers toil away at home during the coronavirus pandemic, often hunched over laptops in awkward positions for hours, employers must prepare themselves for the emerging problem of workplace injuries sustained at home, a health-care professional says.

Doug Pattison, a chiropractor who practises in Regina and Lumsden, Sask., has dubbed it "work-from-home syndrome."

Pattison said he's already treated several patients for chronic strain in their back, neck or shoulders since his clinic reopened its doors to the general public on May 4.

"Sitting for a living is hard on you as it is, but when you're at the office, you've got your fancy work chair and your adjustable desk and all the things that your employers provided you to keep you safe," Pattison said. "But now, with the pandemic, you're working at your kitchen table … or sitting on the couch, and it's putting the body into awkward prolonged positions."

When a person's workspace fits them ergonomically it reduces the risk of strains, sprains and other musculoskeletal injuries (MSIs). According to WorkSafeBC, MSI is the most common work-related injury in British Columbia.

Pattison, who was only treating emergency cases during the first few weeks of the pandemic, said one of his first urgent cases involved a woman who had a pre-existing back problem that had been under control due to some office adjustments, including an ergonomic chair. However, when the employee was forced into an improvised home office, her back pain flared up to the point she couldn't work anymore without treatment.

The chiropractor is urging companies to get serious about preventing work-related injuries at home, before it results in workers' compensation claims and lost time.

Across Canada, millions of employees headed home in March in a collective effort to try to stop the spread of the novel coronavirus and keep people safe. At the time, the priority wasn't packing up sit-stand desks or office chairs with lumbar support. People gamely improvised home offices, taking over kitchen tables and spare bedrooms, stacking laptops on books and scouring for lamps.

A lot of people just went home with their laptops because the employer thought, 'Ah, this is going to be a short period of time.' But now, if this is going to be lasting longer, we need every possible way to prevent these injuries at home.- Doug Pattison, chiropractor

"A lot of people just went home with their laptops because the employer thought, 'Ah, this is going to be a short period of time.' But now, if this is going to be lasting longer, we need every possible way to prevent these injuries at home," Pattison said.

He advises companies to ship a person's desk, chair and computer monitors from the office to their home, and encourages employees to do their part by taking breaks, stretching and exercising.

Chiropractors are obligated to report to the workers' compensation board any injury that a patient states may be work-related. Pattison said he hasn't had to file any reports yet. (He said he treated his patients' problems as an exacerbation of a previous condition and not a new injury.) And he tries to work with employees and companies to address the source of any pain before it becomes a full-blown injury.

Across Canada, provincial health and safety regulations require employers to protect workers from hazards due to poor workplace ergonomics, such as a workstation that isn't the proper height.

In B.C., WorkSafeBC issued guidance on the health and safety responsibilities when employees work from home after the pandemic started. It said companies should have a basic health and safety policy for working from home that, at a minimum, addresses the ergonomics of workstations.

Some people are trying to be innovative, turning their homes upside down to create jury-rigged offices that feel comfortable.

Ryan Holota, vice-president of operations at Saskatchewan Science Centre in Regina, built desks for himself and his wife, Carmen, a high school vice-principal, so they could work in the basement of their home.

They're lucky they love to read because he needed a lot of books and bookshelves to prop up computers, lamps and desks, he said.

His wife started to work on her laptop at the kitchen table, then experimented with an ironing board as a stand-up desk, and eventually settled at a desk that Holota built by balancing an old door on a bookshelf and laundry hamper in the spare bedroom.

"The main thing was just to make something … so I didn't end up hunching over," Holota said. "I wanted to make sure it was something that was comfortable and a position I could continue to work at potentially for a few months."

WATCH | Ryan Holota demonstrates how he set up his home office: 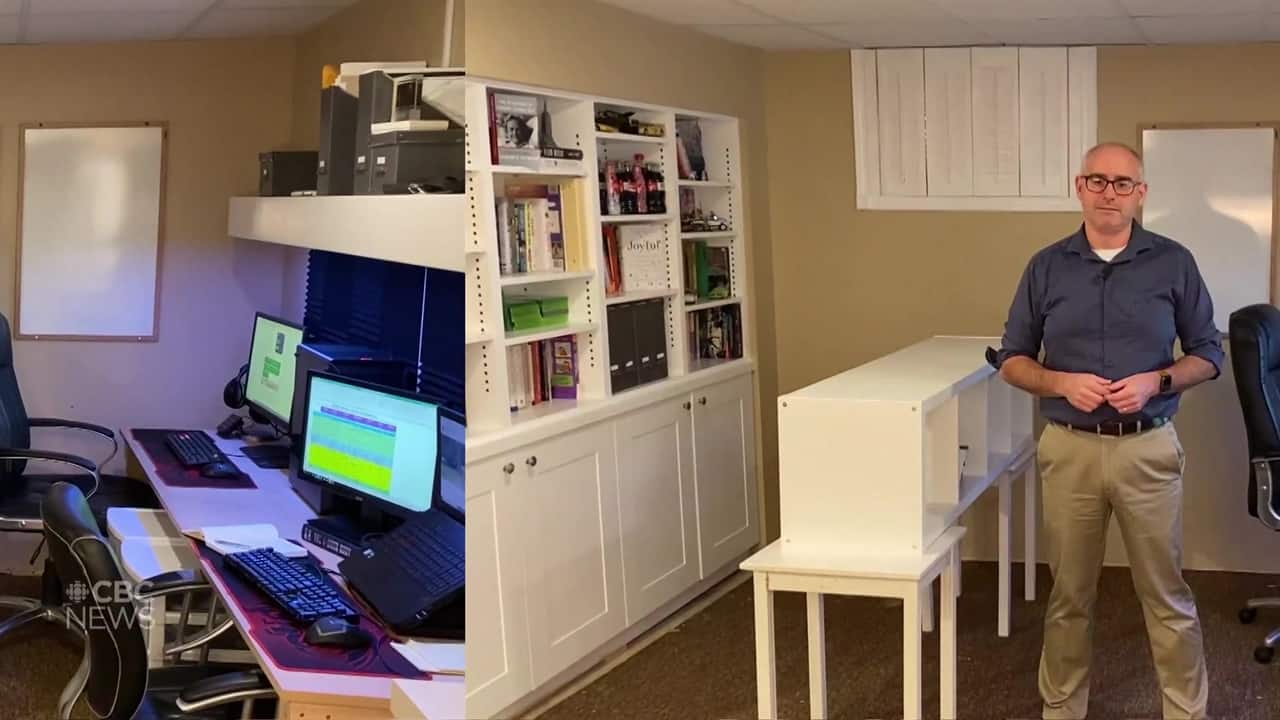 Engineering a home office with books and laundry hampers

9 months ago
2:35
Ryan Holota with the Saskatchewan Science Centre describes how he built two home offices in his Regina basement. 2:35

But not everyone is so handy.

Lori Johb is president of the Saskatchewan Federation of Labour, which represents 100,000 workers. She wants to remind employers that it's their obligation to protect the health and safety of employees at home, including both mental and physical health.

"They still have the responsibility to ensure that the workspace is safe and to do what they can to make sure that is the case," Johb said, speaking to CBC News from her own kitchen office.

As for workers, Johb said they shouldn't ignore or dismiss being uncomfortable as simply a short-term problem because many people will be working from home long-term and need "serious, long-term solutions."

"Always keep track of it. Maybe, make notes of when you first started to notice it and if it's getting worse," said Johb, adding that employees should inform their supervisor and occupational health and safety committee about any discomfort or pain.

More than 60 per cent of office workers had experienced some sort of back, neck or shoulder pain before the pandemic, according to Saskatoon occupational therapist Ian Lewis. (He cited several studies, including one on Alberta telecommunications workers.) He expects the risk would increase in improvised home offices.

However, Lewis said that sometimes physical pain can be connected to high stress levels and poor job satisfaction, not ergonomics, and that some people may feel less pain because they're happier and more satisfied working in the home environment.

It's too early in the pandemic for any scientific analysis of the effect on workers' bodies from working from home.

"We did a great job to get people out of the workplace to keep them safe from COVID, but now all of a sudden, there's other problems that were never really thought of that are emerging problems."

WATCH | How to ergonomically work from home:

How to ergonomically work from home

11 months ago
0:49
Here are a few tips from an occupational therapist on how you can ergonomically work from home. 0:49