'What happened inside the hospital?' Family of man who died in Regina wants answers

Grieving relatives of a young man who they say died by suicide say a recent policy change by the Saskatchewan Health Authority may have saved him.

Grieving relatives of a football player who they say died by suicide after seeking help at a hospital believe a recent change by Saskatchewan health officials may have saved him.

Samwel Uko, 20, of Abbotsford, British Columbia, was in Regina visiting an aunt when his body was found in the city's Wascana Lake two weeks ago.

Justin Nyee, an uncle in Calgary, says he received a call from a relative who told him that the young man they called by his tribal name "Dunga" had taken his own life.

Nyee remembers hanging up and phoning Uko's father, who was crying when he answered.

"It was the worst news ever," said Nyee.

Uko and his family emigrated from South Sudan in 2005. He had entered his second season with the Langley Rams Junior Football Club in B.C. after playing for the University of Saskatchewan Huskies in Saskatoon.

Loved by his community and always there for his family, Uko was an all-around great young man who laughed a lot, Nyee said.

A GoFundMe campaign for Uko's family has raised more than $13,000. A funeral was held for him Saturday in Abbotsford.

Nyee said the family is still trying to piece together Uko's last moments on May 21.

"He kept telling me I'm seeing things. I can't go in the basement. There's people trying to kill me," recalled Ginawi.

Ginawi said he took Uko to the emergency room at the Regina General Hospital. But when they got in line to enter, Ginawi said a nurse told him he couldn't accompany Uko inside due to COVID-19 restrictions.

Ginawi said he left his cell number so staff could reach out if they had questions, but no call came. 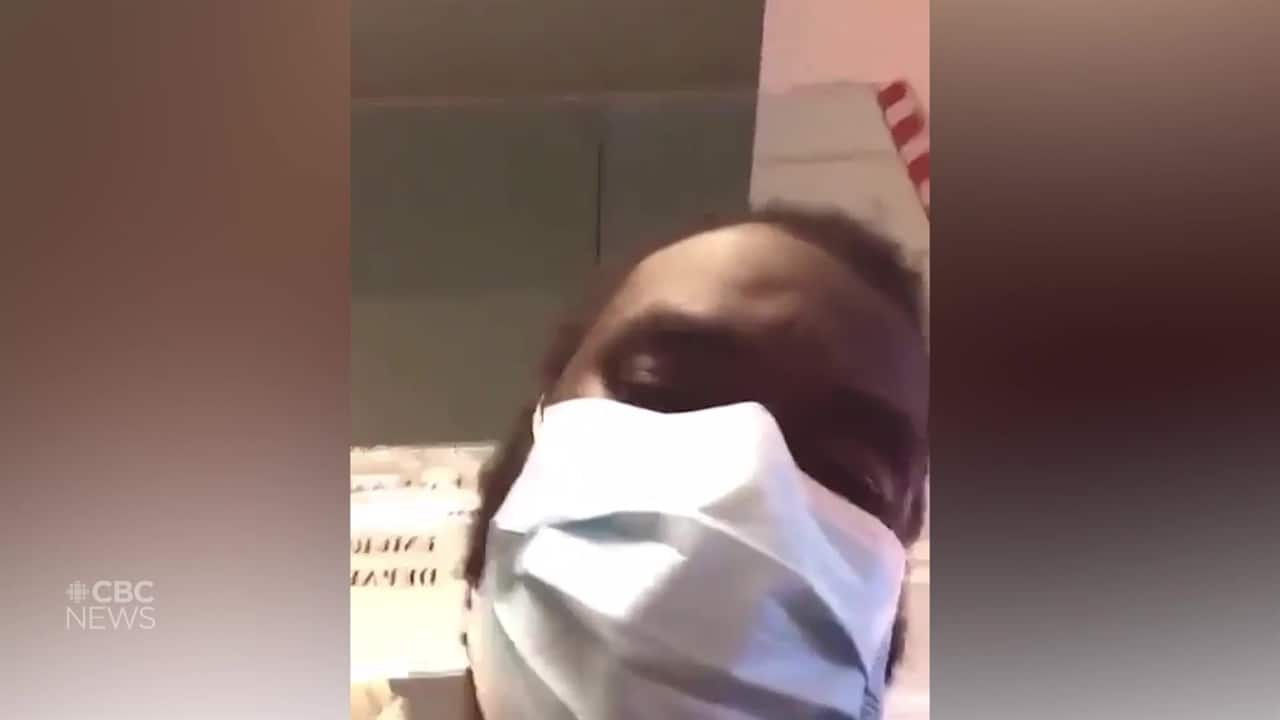 10 months ago
0:19
Samwel Uko was found dead in Wascana Lake on Thursday. His family says he died after seeking help. Uko posted this video to Snapchat. 0:19

About 45 minutes later, Uko called his cousin and told him he had left the hospital.

The pair then went to a grocery store, where Uko bought a sleeping pill from the pharmacy, said Ginawi. He next dropped Uko off at the aunt's house.

"He just keep shaking his head," said Ginawi. "He kept telling me that mental illness is not a good thing. I'm ill, I'm ill, I'm
ill."'

At some point, Ginawi said he believes Uko left the home through a window. Police said witnesses reported seeing a man in the lake about 7:30 p.m.

Later, Ginawi identified the man's body as his cousin.

The family wants to understand what went wrong, said Nyee.

He said Uko's friends also forwarded the family a Snapchat video he apparently made while in the hospital. "It seems like he's saying, 'I need help guys.' 'I need help."'

"We need to know what happened inside the hospital, because in the hospital ... was the last place he visited to show them, 'I need help."'

This week, the Saskatchewan Health Authority changed guidelines for when emergency room patients are entitled to have someone with them despite the pandemic.

Before, people with mobility, hearing, visual or memory impairment and who were seeking emergency care could bring a
companion. Other challenges were to be assessed on an individual basis, said health authority spokeswoman Lisa Thomson.

The new guidelines include "mental-health disability" — anyone in crisis or experiencing any mental-health-related issue that compromises decision-making.

The health authority said the revision was already in the works and is unrelated to Uko's death.

He said it's clear Uko needed to have a person with him in the hospital.

"They need someone to be there."

Saskatchewan's chief coroner is looking at the case seriously, but will not decide whether to hold an inquest until the
investigation is complete, said a spokeswoman with the Ministry of Justice.

Citing privacy concerns, the health authority said it cannot talk about the case.

Scott Livingstone, head of the health authority, said earlier this week that officials were working with Uko's family members to answer their questions.

And the family still doesn't have answers.

"Did they give him the help that he needed? Did they at least try to do something?

"We want to know what happened."

Stephanie Taylor is a Canadian Press reporter based in Saskatchewan.