La Loche shooting: Mayor, local MP call for school to be 'torn down'

The acting mayor of La Loche, Sask., and the MP for the region are calling for the school in their northern Saskatchewan community to be torn down and rebuilt following a shooting Friday.

All 7 injured in the shooting are in critical condition, says government official

The acting mayor of La Loche, Sask., and the member of Parliament for the region are calling for the school in their northern Saskatchewan community to be torn down and rebuilt following a shooting Friday.

"I want that school to be rebuilt. Torn down, rebuilt ... because of the trauma," Kevin Janvier said Sunday following a meeting with provincial and national leaders, including Saskatchewan Premier Brad Wall.

Nine people were shot at the La Loche Community School around 1 p.m. CST — two fatally. Two other victims were found dead in a home in La Loche.

All seven people who were injured in the shooting at the school are in critical condition in hospital in Saskatoon, according to a provincial government official.

RCMP said a 17-year-old suspect, now in custody and facing four charges of first-degree murder, will be in court Monday. The teen also faces seven charges of attempted murder.

While Janvier said the meeting with Wall went well, he added the community needs funding, in many areas, to improve the quality of life. 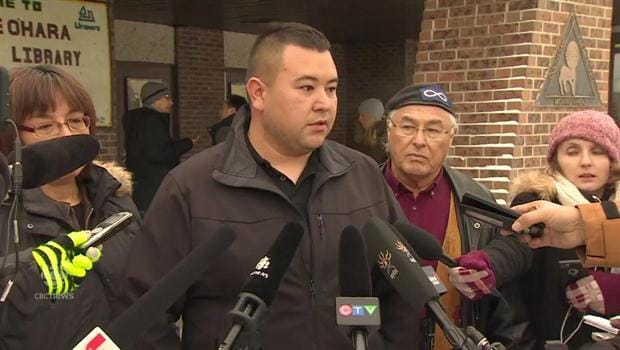 "We need lots of resources ... we need funding," he said. "These conversations have moved us in the right direction."

Georgina Jolibois, who was mayor of La Loche prior to being elected as MP for Desnethé—Missinippi—Churchill River in the fall federal election, also called for a new building.

"There's so much pain, so much trauma. The school needs to be rebuilt," Jolibois said.

Wall said he received "direct and heartfelt advice" from community leaders in La Loche to address underlying social issues in a community still in shock from the deaths.

Wall said he had been in contact some of the families of the people who were wounded.

"There are certain times when there just aren't any words, so you try to listen," he said, about the calls.

Officials on Sunday were not disclosing any additional information about the people who were wounded.

The Federation of Saskatchewan Indian Nations also issued a statement, on behalf of some families, asking "that their wishes for privacy be respected and the media not attempt to contact them or approach them at the hospital at this time."

CBC News has learned, from multiple sources, that at least three high school students were injured. One is a female student whose injuries were described as life-threatening. Two others are males, who played for the school's football team.

Two other staff at the school were also wounded: an assistant principal who was shot in the arm and is recovering and a woman who is a substitute teacher and is married to another member of staff. She has undergone two surgeries.

Wall also pledged to provide immediate support in the form of counselling and covering costs for people needing to travel to Saskatoon to be with people who are being treated in hospitals there.

"If they are having trouble ... the resources are here to provide that counselling," Wall said.

Janvier said that, while he was appreciative of the meetings, he was concerned about follow up.

"Once the media coverage dwindles … we urge those at the provincial level and the federal level not to forget us," Janvier said. "We will never forget January 22, 2016."

"We have issues across northern Saskatchewan," Wall said, talking about education, jobs and infrastructure needs. "We're going to respond to that."

Janvier said the community has a tough road ahead.

"We are hurting and we will be for months to come," he said. "Every decision we make now will be [in the] spirit of healing. We are strong and we will rebuild our hope."

The theme of hope was repeated in comments by federal Public Safety Minister Ralph Goodale, who was also in the meetings in La Loche.

"There needs to be a very clear message to us all, collectively as a country, that there are issues that need to be resolved and we all need to be part of the solution," he added, referring to a variety of issues facing indigenous communities in Canada, such as a lack of resources for addictions problems, programs and activities for youth and a the need for more mental health services.

On Friday, teacher Adam Wood, 35, and teaching assistant Marie Janvier, 21, were shot and killed at La Loche Community School. Brothers Dayne and Drayden Fontaine, aged 17 and 13 respectively, were killed at a home in town the same day.