'We're at a crucial point': Regina grapples with what should be allowed in Wascana Park

Recent development projects in Regina's Wascana Park have been marred by controversy as people have conflicting views on how the green space should be used.

For decades, development in Regina's major park has come hand-in-hand with controversy 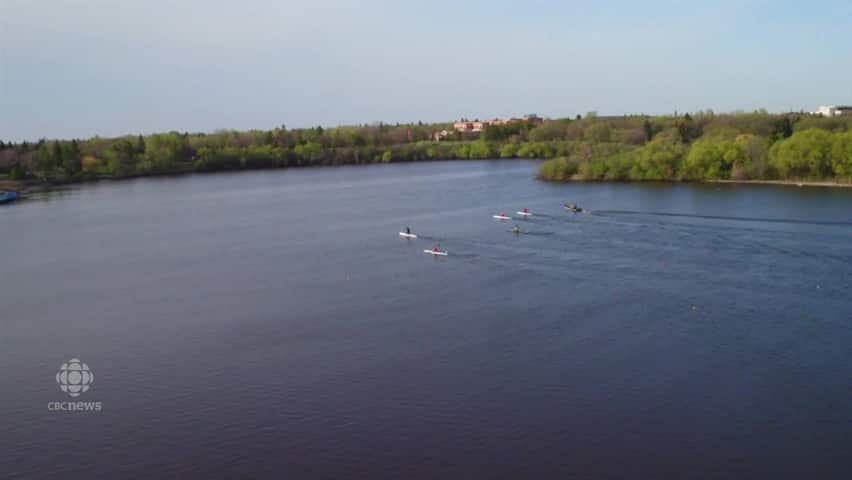 Will Chabun's arms swayed in time with the lapping waves and shaking trees, amid the relentless symphony of birds and bike bells.

He's walking alone around Wascana Lake in Regina — but not really, as he passes by an endless stream of people.

Chabun considers his daily four-kilometre walk around the lake an escape from the city in the heart of it.

"It's kind of an island of greenness — in a sea of asphalt and concrete and wheat fields — where you can do just about anything you want within the bounds of the law, " said the history junkie and former Regina Leader-Post journalist.

The 930 hectares of space is rarely quiet. It's almost hard to imagine the area as it once was — flat, dry and desolate prairie land without trees or water.

But that's how it started before a reservoir was dug in 1882 when the Canadian Pacific Railway needed water.

Since then, the park has had a rich history, including royal visits, protests, celebrations, murder and plane landings. It's been in a continual state of transformation.

It's not perfect — with its cracked paths, goose droppings, curious odours and unswimmable waters — but in Chabun's mind it's pretty close.

And because of its prairie oasis qualities, many Reginans have long been protective of the space and steadfast in their convictions of how it should be used. Now, Chabun said, "we're at a crucial point" when it comes to decisions on development in the park.

That controversy has come hand-in-hand with development in the park is nothing new.

People protested the potential development of the MacKenzie Art Gallery near the Royal Saskatchewan Museum in 1987. This plan was scrapped, even though the new building technically aligned with the guidelines.

Years before that, the land where the museum now sits was set to be a towering railroad hotel, which angered residents because they didn't get to vote on it. The ambitious vision never became anything beyond a steel structure. The construction was halted after the war and the company later went bankrupt.

Recently, two projects — new headquarters for Conexus Credit Union and a new building by Brandt to house the Canadian National Institute for the Blind — sparked protest and scrutiny because people said they did not fit with what's allowed in Wascana Centre. All development projects in Wascana Centre must abide by five principles rooted in 1962 legislation. These are: provincial government, education and research opportunities, cultural arts, recreation and conserving the environment.

"When you're talking about the future of thousands of trees in a protected area or a hitherto protected area it's understandable by people go a little bit nutty —  in the best sense of that word," Chabun said.

"We have to take a deep breath as a community and ask how much more this nibbling away we can endure."

Chabun said the vast area has a knack for leaving first-time visitors and newcomers speechless.

This is by design.

The expansive space had potential — but it took vision to see how the dry, barren prairie land could be transformed into a lush park.

"If you went back a 150 years you wouldn't recognize this place," he said, noting the thousands of trees, shrubs and flowers that have been carefully planted.

"Wascana Park is not pristine nature. It's very tightly manicured, shaped and developed."

The lake that began as a reservoir has undergone two big digs to get it to this point.

In 1905 the newly formed provincial government began to look for a new home.

Around the same time, a man named Thomas Mawson was making waves. He was a self-taught architect and an internationally renowned English landscape gardener.

Saskatchewan's government contracted Mawson to design the grounds around the Legislative building in 1913.

Alex MacDonald, an associate professor with Campion College in Regina, called Mawson a dreamer. Much of what the centre is today stems from his concepts.

He was passionate that the green spaces be accessible and used by all people — regardless of economic status, MacDonald said.

Despite the 1913 Mawson plan being the first development plan specific to legislative grounds, the idea of a formal plan devoted to the area around the lake was left alone for nearly half a century, largely because of the effects of two world wars and the Great Depression.

By that time, the park was starting to fill out. It was becoming harder to visualize how bare it had once been.

Chabun recalls his father musing about the future and considering the space. He looked down at Chabun, saying "this is gonna be the greatest thing ever."

He remembers people would drive to the lake and haul buckets of water out to wash their vehicles. While it was convenient for residents, it wasn't the image the province's capital city wanted to project.

In 1962, the Wascana Centre Authority (WCA) was created. This joined the city, the province and university together as one unit to take care of and govern the space. It also brought about the set of principles that dictate development — and an end to the by-the-shore car wash. 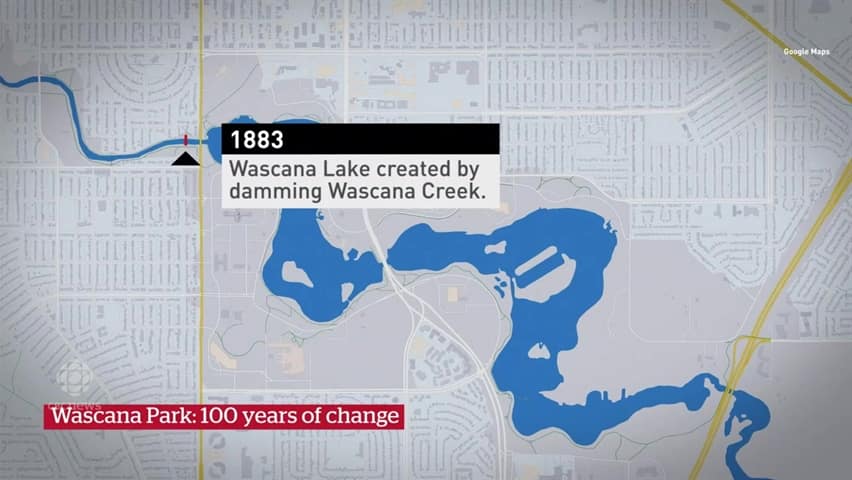 2 years agoVideo
2:38
A timeline of development in Wascana Centre over more than a century. 2:38

Urban parks are so much more than charming city embellishments, said Larry Beasley, a professor of planning at the University of British Columbia. He founded an urban design consultancy and previously worked with the City of Vancouver.

In fact, there's a growing sense of urgency around their existence and preservation.

"They're fundamental to the formula of successful cities," he said.

That's, in part, because of city densification, which has more people moving into homes that don't have backyards.

"All of a sudden many, many more people need that green space and we know as densities go up and cities get more complex and diverse people need more respite," Beasley said.

The one thing you can't replicate is that space — once it's gone, it's gone.- Larry Beasley, urban design expert

Wascana Centre's sheer size means it is integral to Regina's design, he said, adding it is as iconic as Stanley Park and Central Park.

"My God, those become treasures," he said, because they become inviting gathering places.

The integrity and scale of Wascana are important when considering future development, he said.

Beasley notes that people want access to amenities like cafes or concessions, but he suggests these venues be put in areas of lower ecological value in the park.

Designers are now thinking about making cities more sustainable and reflective of the natural environment which means (re)establishing natural ecological systems and patterns, he said.

"The flow of water, animal movements all the kind of natural things that have been slowly being edited out of cities," he said.

Beasley said it's important cities undertake ecological mapping so they understand what tradeoffs they're making for development.

He also mentioned cultural mapping, which looks at which parts of the park are used by different groups of people and how. For example, he said certain places might be important to newcomer populations or Indigenous people.

"It's very important that a community do a layering of understandings of their open space."

Beasley said that developers will continue to try and take up parcels of land, but he's sceptical about proposals for large scale projects.

"Simply because it (the park) looks so big, but that adds up over time into major intrusion into that space," he said.

"The one thing you can't replicate is that space — once it's gone, it's gone."

Jim Gallagher carries his coffee as he walks on familiar paths near the lake, wearing old shoes so not to mind the mud. He used to run through, but he mostly walks his dogs, now, retaining his role as a Wascana Park regular.

"Anytime something has been around for a long time and becomes a built-in part of a community, we start to take it for granted," the longtime Regina resident said.

He referenced what Bill Riddell wrote in The Origin and Development of Wascana Centre: "Londoners tend to take Hyde Park for granted, but one can imagine the deafening chorus of protest that would greet any proposal that seemed to threaten its integrity."

He's not suggesting people don't appreciate Wascana Centre, rather they assume it will never change.

"It's evolved much more quickly than they had thought it might."

Now he thinks it's time for the park to slow its roll.

"By allowing [commercial development] in the park it's extremely difficult to explain to the next proponents or developers why they can't build in the park. That's when the whole park and the centre risks changing dramatically from its intention."

Change happens amid complacency, he said. Gallagher never imagined he would have to become a vocal advocate for the park.  He's now part of No Business in the Park, which bills itself as a grassroots citizen's group formed to stop the takeover of Wascana Park by commercial interests.

Gallagher said there's ample room in the city for commercial developers outside of Wascana Centre and encourages people to stay vigilant.

"What's happened within the last couple of years, of course, is extremely disturbing to people who know how it was."

He believes future proposals should be put up for extensive public consultation, and said this was absent from the Conexus and Brandt projects.

Gallagher believes the province should relinquish its relatively new power over the park.

Gallagher wants the WCA back. Furthermore, he believes its members should be elected by the public.

PCC board chair Mike Carr sees the body's members as stewards of the "gem on the prairies" and feels the master plan will guide them.

"Those principles are enshrined and they need to be protected."

The 2016 master plan "confirms the shift in emphasis from development to stewardship. Much of Wascana Centre is mature in the sense that development in those areas is nearing completion and landscapes are well-established."

"Changes in these areas will largely be limited to modest building renovations and replacements, and to normal landscape evolution."

Carr said he's not aware of any current proponents for commercial development in the park, but suggested it would be "unreasonable" to suggest that some form of development won't continue.

When asked how the PCC would guarantee enough public consultation moving forward, Carr said "enough is, perhaps, in the eye of the beholder."

"We will ensure that any development that is proposed is done so in a public way, so that people get an ample opportunity to understand the purpose and the intention of the development," he said.

He put the onus on individual developers, saying they are responsible for engaging the public.

He cited the project expectations checklist included in the 2016 Master Plan and said developers must abide by this.

The checklist exists "to ensure that the environmental quality and character of Wascana Centre is maintained, and that the spirit and intentions of The Wascana Centre Act are upheld."

Consultation and community engagement are not included in the document.

Chabun noted the upcoming generations will be left to deal with the development that happens around this time — commercial or not, and for better or for worse.