A video recording obtained by CBC's iTeam provides further indication that Bill Boyd presented a Chinese immigration scheme to investors as though it were supported by the Saskatchewan government.

CBC obtains video of Boyd's pitch to Chinese investors, which was at the centre of conflict of interest review

A video obtained by CBC's iTeam provides further indication that Bill Boyd presented a Chinese immigration scheme to investors as though it were supported by the Saskatchewan government.

In addition, his associates falsely claimed Boyd was the minister and a government representative.

In March Boyd, an MLA and former high-profile Saskatchewan cabinet minister, was in Beijing urging Chinese nationals to invest in a business he's personally involved in, and would profit from.

Captured in an almost two-hour-long cellphone video, posted on a Chinese website, one of Boyd's associates, Guoqing Li with China-based promoter Happy of Life, addressed the crowd. He told the investors "the project has received the support of the government of Saskatchewan, which enhances investors' confidence." 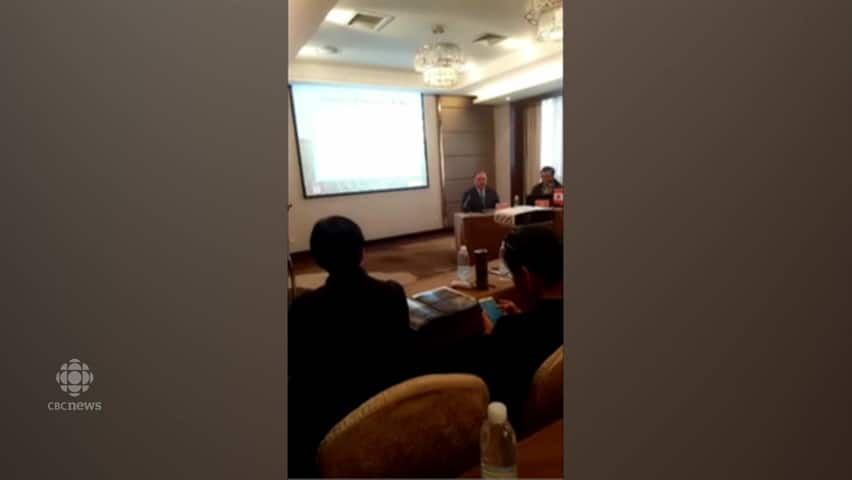 Saskatchewan's conflict of interest commissioner, Ron Barclay, who examined Boyd's immigration scheme, was aware the seminar was recorded, but Boyd did not provide him a copy.

That did not prevent Barclay from concluding, in a report released Monday, that Boyd "inaccurately represented the involvement of the government of Saskatchewan in this irrigation project."

Barclay came to that conclusion based on a review of literature and promotional material for Boyd's seminar.

He found that material also falsely presented Boyd as the current Saskatchewan Minister of the Economy, even though he resigned that post last August.

He said that Boyd violated the conflict of interest act.

'This is the legislative building where the minister works'

The video reveals that Boyd's associate continued to promote that misconception.

During a video presentation, an image of the Saskatchewan legislature was shown. Xu, who lives and works in Saskatoon, told the potential investors "this is the legislative building where the minister works."

In an interview a few weeks ago, Xu explained to CBC that referring to Boyd as the minister was a cultural sign of respect in China.

Later in the seminar, Li told the crowd the project's future is promising because "even Mr. Bill Boyd comes over, which shows the importance the provincial government attaches to the project. Therefore, I feel I am full of confidence to the project."

In his defence, Boyd told the commissioner that during his presentation, he made it clear that he was there strictly as a farmer and a businessman, not as a politician.

Barclay didn't buy that, concluding "Boyd was not presenting himself as a private business person and farmer," but in fact "was using his office as an MLA to seek to influence the decisions of potential investors."

The video doesn't show Boyd explaining he was in China as a private businessman and a farmer and not as a politician. It also doesn't explicitly show Boyd claiming to be a minister or claiming the government of Saskatchewan supports his specific project.

The video is not a complete record of the presentation. It doesn't include Boyd's opening remarks and the cellphone recording stopped and restarted at several points throughout the event. It's not clear why.

Despite the incomplete nature of the recording, it does provide some insight into how Boyd portrayed his own connection to the government of Saskatchewan.

Boyd refers to 'our government'

On a few occasions, when describing the government of Saskatchewan's plans for irrigation, Boyd called it "our government."

"Our government is very, very supportive of irrigation development in our province," he said at one point.

Later, he emphasized "our government wants to see expansion of irrigation acres in our province."

And still later, Boyd told the would be investors "our government believes in a long-term growth strategy for irrigation."

At another point, he described the government's long-term plan and tied it to his own irrigation scheme.

"As a part of the irrigation strategy for 2020 ... the province hopes to attract, additionally, investment in immigration from all areas with higher land and water costs. We believe that it's going to be essential that we have a significant amounts of investment flow towards irrigation development in the future," Boyd said.

He was more ambiguous on other occasions, referring to the government as a third party.

"They both support where irrigation is presently and are wanting to infill more irrigation," Boyd said.

In another place, he said: "the government will also develop a plan for future development on the west side project."

CBC reached out to Boyd for comment but he hasn't responded.

Even without the videotaped remarks from Boyd and his associates contained in this video, the commissioner had enough evidence to conclude "to a reasonable observer the prestige of Mr. Boyd's office as MLA and the implied association with the Saskatchewan government would give potential investors more confidence in an investment in a foreign market partly motivated by access to government programs."

Premier Brad Wall has booted Boyd from the Sask. Party caucus. He has also referred the matter to the Ministry of Justice for further review.

Boyd officially resigns from politics at the end of the month.

Geoff Leo has been a reporter for CBC News in Saskatchewan since 2001. His work as an investigative journalist and documentary producer has earned numerous national and regional awards.