CBC News has learned the amount of oil travelling by rail in Saskatchewan has grown by more than 300 per cent in the past 20 months, which has experts and community leaders calling for tighter regulations and better preparation in case of an accident. 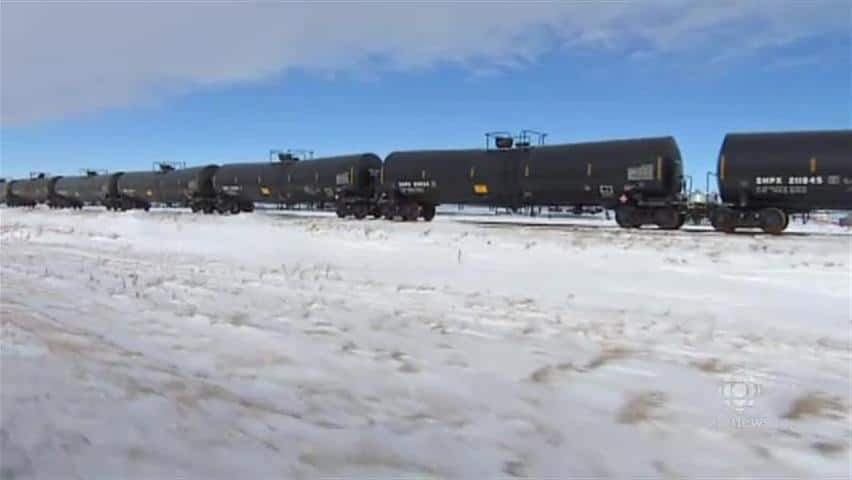 7 years ago
2:31
CBC News has learned the amount of oil travelling by rail in Saskatchewan is increasing at a fast pace, which has experts and community leaders calling for tighter safety regulations. The CBC's Geoff Leo has the story. 2:31

CBC News has learned the amount of oil travelling by rail in Saskatchewan has grown by more than 300 per cent in the past 20 months, which has experts and community leaders calling for tighter regulations and better preparation in case of an accident.

At a Saskatchewan Urban Municipalities Association (SUMA) meeting mayors and councillors from across the province unanimously voted for tighter rail safety rules Tuesday.

They're motivated by the disaster in Lac Megantic that killed 47 people last year. Another factor is the growing amount of oil moving by rail through Saskatchewan towns.

"We have a railway going through our town, which at one time was what you wanted and now, not so much," said Jen Sedar, a town councillor in Carlyle.

"It was about once a week a train used to pass through town, now it's several trains a day," said Sedar. The trains travel past a new neighbourhood, a trailer court and a couple of schools.

"Speed is an issue, the age of the railway is an issue, cars being left in that area is an issue," said Sedar. "We do have residents that are concerned that if there was an accident it could affect their homes and perhaps even their lives."

Amount of oil moving through Saskatchewan is increasing

In recent months, the amount of oil being shipped by rail in the province has increased.

Companies started moving oil by rail in Saskatchewan in the fall of 2010, but the provincial government didn't start tracking the quantity until March, 2012, when 113,000 cubic meters were shipped.

In the most recent report, 383,000 cubic meters of oil was shipped in a month.

The head of SUMA says the industry is growing faster than safety preparations and regulations.

"Are we prepared? No I think we've been lucky over the years that there hasn't been something," said Debra Button.

The Bakken region is where much of Saskatchewan's oil is being produced and the same place where the Lac Megantic oil came from.

Anthony Perl, a professor of urban studies at Simon Fraser University says Bakken oil is a big concern because it's very unstable.

"Before Lac Megantic, no one outside of a few petrol geologists and chemists would have imagined that crude oil could have become explosive and set off the kind of inferno that occurred there," said Perl.

He says this type of oil is changing the way crude is being transported.

"All of the expectations, all of the protocols, all of the policies in place to move oil by rail were not really set up for this, so we're back to square one for now."