People gathered in Regina Sunday for what they called a celebration of diversity. 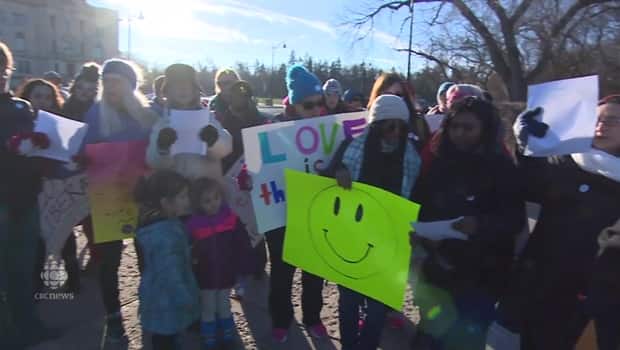 People gathered at the Legislative Building in Regina Sunday afternoon for what was described as a celebration of diversity.

The gathering, promoted on a Facebook page called Love Trumps Hate, invited people to assemble and express support for those who may be "feeling sad, in despair, angry and confused" following the result of the U.S. election.

Lindy Whitehouse, a graduate student at the University of Regina, organized the event.

"I thought it would be a good idea to bring people together and try and make people realize that not everybody is so hateful. Just spread a little bit of love around," Whitehouse said, when asked about how she was moved to action.

The Facebook page noted "it is important that people realize they are not alone in how they are feeling."

President-elect Donald Trump has been embroiled in controversy since the very early days of his campaign. Many of his views and statements about Muslims, Mexicans and others have attracted criticism.

According to the Love Trumps Hate page, the gathering in Regina aims to support groups such as LGBTQ+, women, people with disabilities, environmentalists, immigrants, refugees, religious people and people of various different ethnic backgrounds.

Whitehouse, who is from the United Kingdom, said the idea for the gathering began forming after the Brexit referendum in which U.K. voters opted to leave the European Union.

"There's been a lot of hate spread through social media [and] all sorts of avenues," she said, adding she hopes the message of the gathering is heard. "It's very easy for people to spread their hate messages, so maybe it's important that some of us come out and spread those love messages instead."

People who gather, about 20, carried signs with a variety of positive statements like, 'Together is better'.

They also sang along to a rendition of the John Lennon song Imagine.

Protests have reported in a number of cities after the election in which the Republican nominee defeated Democrat nominee Hillary Clinton.

The Love Trumps Hate page insisted the Sunday gathering should not be interpreted as a protest demonstration.