A 17-year-old boy now charged with four counts of first-degree murder was in a school building in Laloche, Sask., for about 15 minutes before being taken into custody at gunpoint by RCMP officers, the Mounties said Saturday.

A 17-year-old boy now charged with four counts of first-degree murder was in a school building in Laloche, Sask., for about 15 minutes before being taken into custody at gunpoint by RCMP officers, the Mounties said Saturday.

The youth is accused of shooting nine people in the La Loche Community School's Dene Building, killing two. Another two victims were found in a home in the northern village.

"There was no negotiation," RCMP Supt. Grant St. Germaine told reporters Saturday afternoon in La Loche, noting the suspect had a loaded firearm at the time he was taken into custody.

About 150 staff and students were in the school when the shooter arrived about 1 p.m. CST, St. Germaine said, adding that calls to RCMP about an "active shooter" were made almost immediately. Officers arrived at the school in about six to eight minutes, he said.

He said officers saw the front door to the school had been struck by bullets, went inside and began looking for a suspect.

St. Germaine said they spotted a youth and pursued him through the building.

"They followed what they're trained to do," St. Germaine said, and when they came to the suspect "they challenged him and he surrendered."

St. Germaine said about three to four minutes had elapsed from the time officers entered the school to having the youth in custody.

They later received a call about a home, on Dene Crescent, where officers found two people dead.

Seven other victims were taken to the health centre for treatment and four were transported to Saskatoon for further care.

The youth is facing four charges of first-degree murder and seven counts of attempted murder.

Police said they were still gathering evidence from both crime scenes.

"The days and weeks ahead are going to be difficult," St. Germaine added. "It's a sad and difficult time ... we must get through this together."

St. Germaine said he did not have information about a motive, nor details on any relationship between the accused shooter and the two victims found in the home, Dayne Fontaine, 17 and Drayden Fontaine, 13.

The name of the accused can't be released because he is under 18 and is covered by provisions of the Youth Criminal Justice Act.

Among those at the school Friday was Darius Piche, 17.

"I was walking around and I seen him walk," Piche said, recalling a direct encounter with the alleged shooter. "He looked a little stressed, right."

Piche said he remembered seeing the youth "pull out that gun" and he quickly started to alert others.

"I ran back inside and told everyone to run, he has a gun," he said. "My intention was to run to the commons washroom but I just ran the other way and started telling everyone he has a gun.

"It was an average day that went horribly wrong," Piche added, saying he knew the youth and was not aware of any issues.

"It's a guy I grew up [with]," he said. "One day he is all good and then the next he is doing all of this, taking innocent lives." 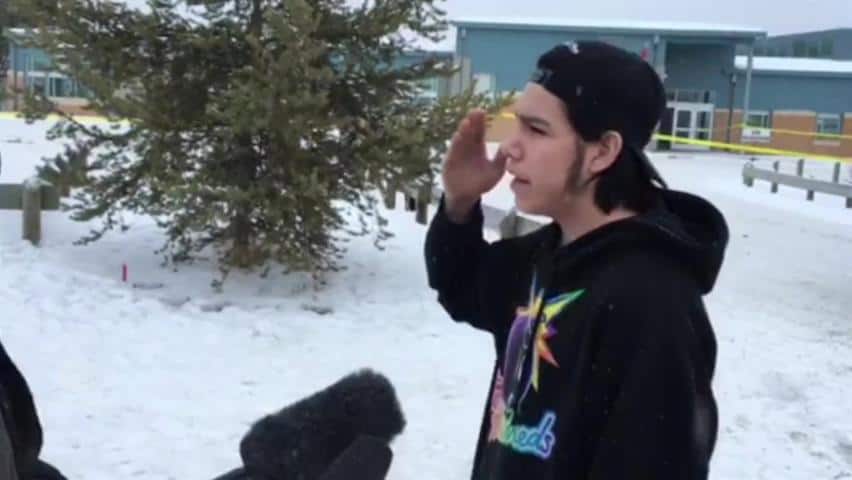 5 years agoVideo
1:02
CBC Saskatchewan spoke to a teenager who said he witnessed the moments of the shooting. 1:02
CBC's Journalistic Standards and Practices|About CBC News