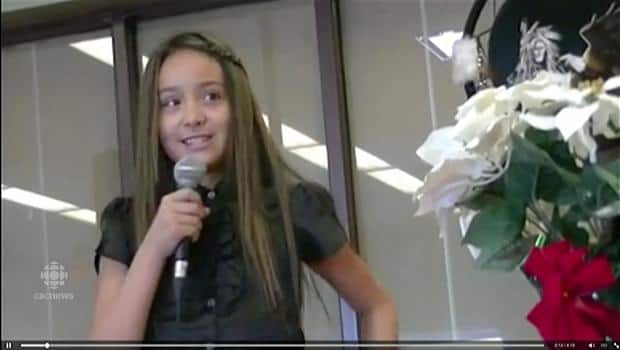 While some preteens might be giving presentations about their favourite hobby or what they did on their summer vacation, Valyncia Sparvier has picked a much more serious topic.

This year, when the 11-year-old was asked what topic she'd like to cover for her Grade 6 public speaking assignment she said murdered and missing indigenous women.

"Her teachers were a little surprised," said her mother, Brandy Maxie.

Maxie said she wasn't surprised though. Like most aboriginal families, the issue has influenced their family as well. Maxie's cousin Danita Bigeagle went missing almost 10 years ago in Regina. And five-year-old Tamra Keepness, who disappeared in Regina in 2004, is also from their home reserve, Whitebear First Nation.

In her presentation, Sparvier said, "In just a few short years, the risk to myself and my peers increases dramatically. I am one of the oldest of my cousins and I have a lot of beautiful cousins and I want to keep them safe."

Sparvier has also added her voice to those calling for an inquiry into missing and murdered indigenous women. Since her initial presentation, Sparvier has been asked to share her presentation at other events, and plans to continue educating both aboriginal and non-aboriginal preteens about the issue.