A Saskatchewan family's vacation turned into a daring escape after a boat fire in British Columbia.

A Saskatchewan family's vacation turned into a daring escape after a boat fire in British Columbia.

Chris Murphy, his wife Lori and their four kids were among four families who set out on the August long weekend to have a COVID-19-friendly week away from the public on a houseboat in the Okanagan. There were 21 of them in all, including 12 children.

Murphy said all of the families had been living in COVID bubbles in Saskatoon before travelling to B.C. and renting the watercraft from Sicamous Houseboats. They boarded the houseboat on Aug. 3 at 5 p.m. PT and enjoyed the rest of the day before mooring for the night on the shore of Mara Lake.

"It was actually a really nice evening," Murphy said. "Everyone was kind of in bed by about midnight."

Murphy said family friend John Witt was acting as the captain for the trip. At about 2 a.m. PT on Aug. 4, as many slept, Witt was doing a round to check everything on the boat and noticed the generator that ran the air conditioning was turned off.

Witt went into the back area to check on the generator and saw flames. He screamed fire, waking up everyone on the boat.

"We ran out of there," Murphy said. "By the time we got off, this thing was like in full flames. Like within a minute." 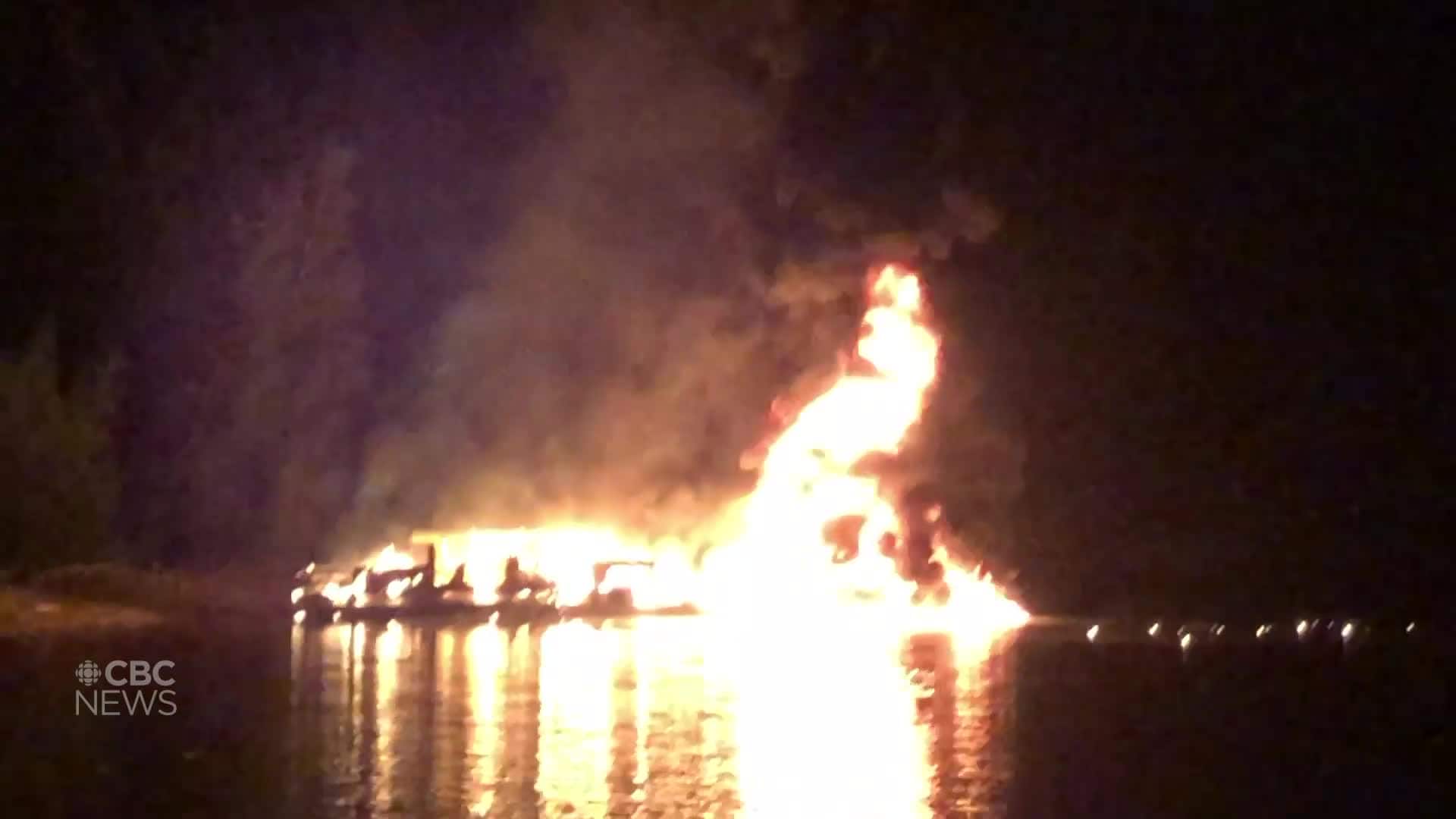 5 months agoVideo
4:10
Chris Murphy describes his family's escape from a houseboat that caught fire on a lake in B.C. 4:10

Murphy said no smoke detectors went off and it was chaos finding everyone in the dark.

He saw his wife with their baby, then his two next-youngest, but there was a brief moment of uncertainty about their 10-year-old. They found her on the beach safe.

"I knew that the six of us were off but I really had no idea about the other 15."

We had to get away from the boat because it was going to blow up.- Chris Murphy

To add to the panic, the families knew there were about 600 gallons of gasoline and two propane tanks on the boat.

"We had to get away from the boat because it was going to blow up," Murphy said.

The families started moving up a rocky beach in bare feet, with the adults carrying the children they could. Murphy's six-year-old son had to walk on the rocky shore with no shoes.

"We had to get out of there. The boat can explode. Keep moving."

Murphy said they got a bit of hope when they saw a cabin about 700 feet away.

It turned out a few families were maintaining their own COVID bubble in the cabin. Murphy's group quickly ran toward it and a person came out to shine a flashlight for them to see.

"They're just amazing. They took us in and gave us clothes off their back," Murphy said.

There are people out there who just really care about the human condition and and are willing to do things to help other people.- Chris Murphy

A few hours later, with the boat still on the water, the families in the cabin drove Murphy's group to a nearby motel.

The group was able to sort out what to do next at the motel. Murphy said emergency services and the houseboat dealership covered two nights at the motel and vehicles for the families to get home.

Murphy said the owner at the car rental business wanted to do something to help and gave the families a prepaid VISA card to cover some expenses on the trip back home to Saskatoon.

"It's kind of easy to become removed, maybe a little bit jaded, and not realize that there are people out there who just really care about the human condition and and are willing to do things to help other people."

Murphy said John Witt has filed a complaint with the Transportation Safety Board of Canada (TSB) about the incident.

The TSB noted that it receives thousands of reports every year about problems or accidents related to marine, pipeline, rail and air modes of transportation and "practical considerations dictate that only a small proportion of these occurrences can be fully investigated."

Murphy said he thinks some of the group may have lasting psychological effects from the incident, but he's glad everyone is OK, even if they lost IDs, shoes, car keys or money.

"If John would not have looked … if he would have seen that fire two minutes later, no one would have seen it. We had a two-minute window. Otherwise we all would've been on there like there just would have been no getting out of it," he said.

"There's so many things that had to be just done precisely, correctly for us … for anyone to get off that boat."

Asked for information on the cause of the fire, the B.C. Fire Commissioner said it could not comment during the investigation, but commended the Sicamous Fire Department for its response to the situation.

With files from Heather Morrison