A summer exhibit at the Saskatchewan Science Centre looks to spark joy in people using scientifically proven design elements, and to examine the social phenomena of selfie museums.

Saskatchewan Science Centre asks visitors whether the space, or the picture, triggers joy 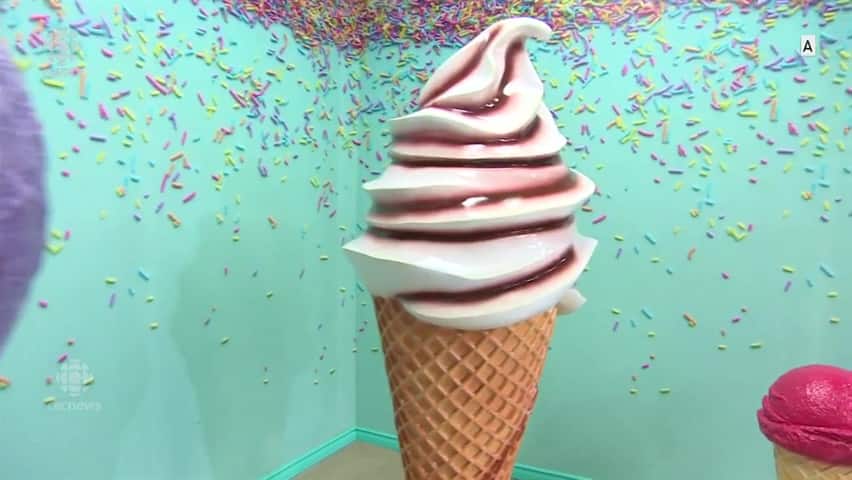 It's the modern dilemma: Is it enough to sit on a unicorn, or does one need to snap a selfie on the mythical beast too?

Filling a room with surprising or simple things like rainbows, bubbles, or fluffy clouds could spark a feeling of joy in someone, but the Saskatchewan Science Centre is asking visitors to ponder how the experience of that space — and the feeling of joy — changes when a person preens for a selfie.

The Regina science centre has launched a summer exhibit called the JoyLab. Its goal is twofold: to spark joy in people using scientifically proven design elements, and to examine the social phenomena of selfie museums.

Selfie museums and similar art exhibits — such as Infinity Mirrors, by Japanese artist Yayoi Kusama — have recently popped up around the world, and encourage attendees to snap pictures of themselves.

JoyLab wants to trigger self-reflection on whether people feel joy from the space, or the photo.

The exhibit features ten stations — a light tunnel leads visitors to a room filled with rainbow stripes, a moon walk, a sky room with dangling white clouds and a pastel-coloured oasis filled with bubbles, to name a few.

"It's a simple way to just really think about what does bring you joy in your life," said Saskatchewan Science Centre CEO Sandy Baumgartner.

A school group from Davidson, Sask., flooded into the JoyLab on Friday. Four 13-year old girls were so excited to take pictures with giant ice cream cones and a wall of purple flowers that they practically spun in circles.

"It's just so overwhelming but, like, so cool at the same. I love that feeling. It's like when you walk into Disneyland, you don't know where to go and it's just so exciting in every single way," Farrah Low, 13, said.

The girls liked the colours, the mirrors and surprising features like the upside-down room, but admitted that they wouldn't have enjoyed it as much if they couldn't take pictures.

"I just like taking pictures, so that's enough joy for me, right there," Caitlyn Haas said, noting that she has two Instagram accounts. "Wouldn't it be awesome if your friends thought you were really in some kind of really cool garden with roses? Or a bubble bath?"

Baumgartner says she wants JoyLab to be "fun and engaging" but also meaningful and science-inspired.

It's based on the book Joyful: The Surprising Power of Ordinary Things to Create Extraordinary Happiness by designer Ingrid Fetell Lee, who calls herself the "Nancy Drew of joy."

Fetell Lee investigated the science behind feelings of joy, collecting data from psychology and neuroscience, and concluded that certain design elements, including colours, round shapes, layers and an abundance of items inspire those feelings more than other design features.

For example, she cites a research project that used functional MRIs to measure the brain's response to round objects compared to angular objects.

"That's an unconscious response, probably something we are not aware of, but that response suggests that we feel a slight increase in anxiety when we're around angular shapes," Fetell Lee said in a telephone interview from New York. "That's not present when we're around round objects."

She said it's exciting that the science centre took her book's findings and applied themes, such as energy, abundance, transcendence and celebration, to the exhibit.

The science centre doesn't present much of the science in the exhibit, however. There's a poster that cites the different themes, some cue cards, a copy of Fetell Lee's book, and a space to watch her TED talk on the topic.

Baumgartner expects people will "go crazy" on social media with the exhibit. Fetell Lee doesn't have a problem with that — she recognizes that sharing an experience can increase a person's joy — but she also hopes people aren't solely focused on how many likes they get on Facebook.

"If you're really thinking about it, as 'I'm really enjoying this, and I want others to be able to experience it with me,' and you take the photo with that spirit, I think that can actually enhance your joy, as opposed to taking away from it. But it is a fine line, and I think we have to feel that out for ourselves."

Marissa Cammer, 13, just knows there's something about the space that she likes and needs to photograph.

With files from Joelle Seal