Saskatchewan Premier Brad Wall was touring the flood zone Wednesday in the southeast corner of the province.

Hospital patients had to be evacuated Tuesday amid rising flood water 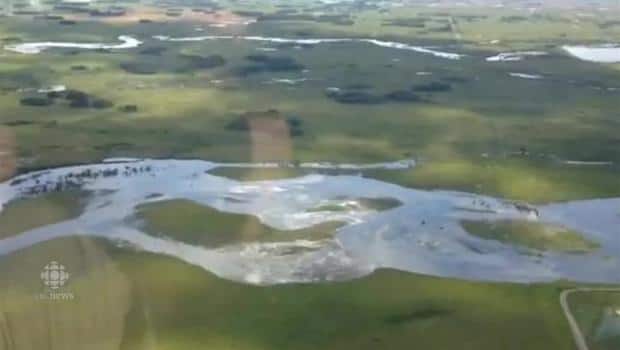 Saskatchewan Premier Brad Wall was touring the flood zone Wednesday in the southeast corner of the province.

He met with Melville Mayor Walter Streelasky and saw firsthand the impact of the flood on the city of 5,000.

On Tuesday, more than 150 residents of St. Peter's Hospital and St. Paul's care home had to be evacuated to the local hockey arena due to rising flood waters. A massive sandbagging operation has been underway.

Over the weekend and earlier this week, 100 to 200 millimetres of rain fell on the area. Basements have been filled, cropland has been inundated and infrastructure has been damaged.

It's a similar situation in western Manitoba where, on Tuesday, Premier Greg Selinger was touring in the flood zone.

Wall said the situation may be worse than 2011, when $360 million was spent repairing the damage in Saskatchewan.

Wall said he is working to have a disaster assistance office set up in Melville by Friday.

"I have a hard time describing what I saw from the air just in terms of water that is literally everywhere," he said.

Early estimates show the rainstorm and flooding could cost more

Many flood prevention projects have been done across the province over the last several years, but Wall said this was an unprecedented storm.

"Are we ever going to have infrastructure that proofs us against nine inches of rain in 48 hours? Probably not."

Also on Wednesday, government officials said there are now 54 communities where local states of emergency are in effect.

Officials also noted that efforts to protect the hospital in Melville were working and no water entered the building. They added that they are currently looking at returning patients to the facility on Thursday.

The work of volunteers who have rallied in dozens of communities was also noted by officials who said the response of local citizens has been instrumental in providing relief.

In Melville, the extra effort of staff -- particularly at the hospital and care home -- were also noted.

In one case, a care aid, Glenn Stecyk, was able to bring his dog, Kilt, to the temporary location for residents where his presence helped to reduce stress.

"He comes with me and he's actually a good therapy dog," Stecyk explained. "Kilt comes here and goes from resident to resident and provides a bit of a distraction from everything that is going on. He does well with the residents."

"He's a good guy," said Carol Hastie, 88, one of about 120 residents of St. Pauls nursing home who have been out of their regular rooms.