Saskatchewan Party wins in a landslide

Brad Wall's Saskatchewan Party has won its second majority government in a landslide, capturing about 64.2 per cent of the popular vote — a historic high — with almost all the votes counted. 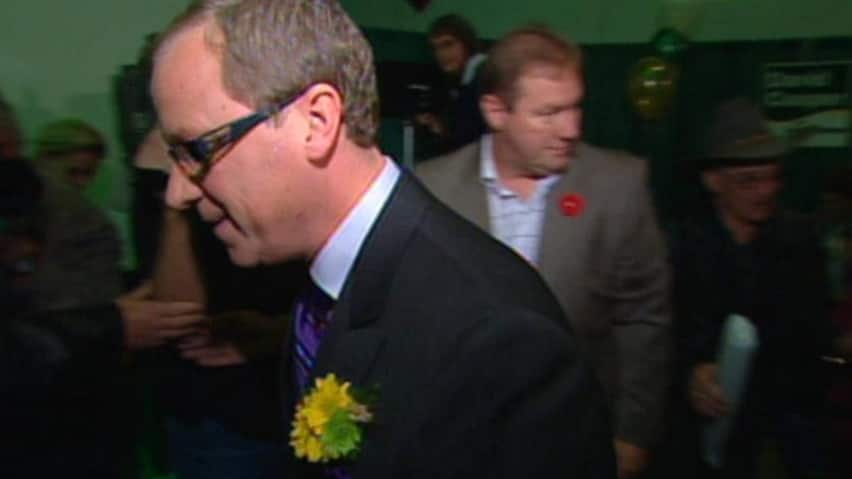 The Saskatchewan Party won its second majority government in a landslide on Monday.

With almost all the votes counted, Brad Wall's Saskatchewan Party captured about 64.2 per cent of the popular vote — a historic high — while Dwain Lingenfelter's New Democrats polled 31.9 per cent.

The Saskatchewan Party picked up 11 seats, finishing with 49 out of 58. The New Democrats ended up with nine seats.

Wall won in his home constituency of Swift Current, making him the only party leader to win his seat.

Speaking to supporters Monday night in Swift Current, a jubilant Wall said people outside the province may wonder why the NDP "orange wave" that was seen federally and in other provinces this year didn't materalize in Saskatchewan.

"Well, what those folks may not know is that in this province, green is the colour," Wall said to applause.

Wall said his government will continue to build on Saskatchewan's economic prosperity, which he said has made people in the province optimistic about the future.

"This new Saskatchewan that you have built is stronger and prouder and better than it is ever been, and we are not going back," he said.

"There is still work to do, but I know we are up to the challenge because Saskatchewan people are facing their future today with hope and with optimism…. They know this: the only day better than today in Saskatchewan is tomorrow in Saskatchewan."

Before the election was called on Oct. 10, the Saskatchewan Party held 38 seats and the NDP held 20.

The Sask. Party not only expanded its seat count, it increased its popular vote — a rarity for a second-term government.

The party won by expanding its foothold in Regina and Saskatoon, in some cases knocking off longtime incumbents such as New Democrats Kevin Yates in Regina Dewdney and Judy Junor in Saskatoon Eastview.

Voters once again shut out the Liberal Party, which ran nine candidates and received a total of 0.6 per cent of the vote.

The Green Party ran a full slate, but didn't come close to winning any seats, finishing no better than third in every contest.

Voter turnout was down 10 percentage points: 66 per cent compared to 76 per cent four years ago.