It was a triumphant night for Saskatchewan Party leader Brad Wall on Monday as his party won its third majority government, while the NDP saw its leader Cam Broten lose his own constituency.

It was a triumphant night for Saskatchewan Party leader Brad Wall on Monday as his party won its third majority government.

And it was a mostly dismal night for the NDP, which picked up a seat, but saw its leader Cam Broten lose his own constituency.

With 100 per cent of the polls reporting, the Saskatchewan Party had won 51 constituencies and the NDP had won 10.

"Something got done in the province of Saskatchewan tonight," Sask. Party Leader Brad Wall said to cheering supporters in his home constituency of Swift Current.

We didn't win anything today. We have been given an opportunity to serve.- Brad Wall, whose Saskatchewan Party has won its third consecutive majority

Wall, who also won his local election for the fifth straight time, promised to work hard to earn the continued trust of the people of Saskatchewan.

"We didn't win anything today," Wall said. "We have been given an opportunity to serve."

The campaign began with some embarrassments for the NDP: four candidates were removed for offensive statements made on social media in the past.

The NDP's platform promised more teachers and social workers would be hired. The Sask. Party platform had few promises, however, although privatizing liquor stores was one of them,

Midway through the campaign there was a one-on-one televised debate between Wall and Broten that included some heated exchanges, but didn't seem to change many people's minds.

For Saskatchewan Party Leader Wall, the three-peat after winning in 2011 and 2007 puts him on the path to being one of the province's longest-serving premiers. 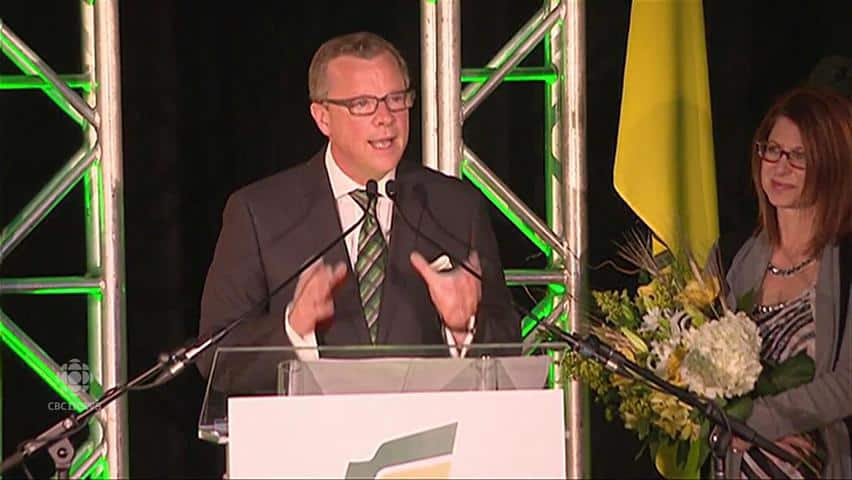 For Broten's New Democrats, a win would have been a major upset for a party that was crushed in 2011 and lagged in the polls for much of the time since.

Instead, Broten was in a tough fight all night for his own seat in Saskatoon Westview before losing to the Saskatchewan Party's David Buckingham.

Other parties represented on various ballots include the Liberals, Greens, Progressive Conservatives and Western Independence Party.

In the last election, the Saskatchewan Party elected 49 members and the New Democrats elected nine. This time around, there's a new electoral map with 61 constituencies.

With almost all the votes counted, the Saskatchewan Party had about 63 per cent of the vote, compared to the 64 per cent they received last time.

This isn't quite the night we were hoping for.- NDP Leader Cam Broten

That makes it a "Groundhog Day" of an election result, according to Éric Grenier, political pollster and analyst for CBC Saskatchewan, referring to the Bill Murray movie where a character continuously relives one day.

"Voters in Saskatchewan really haven't changed their minds over the past four years," Grenier said.

At NDP headquarters in Saskatoon, Broten told his followers he was happy to see new NDP MLAs elected, but was disappointed with the overall result.

"This isn't quite the night we were hoping for," Broten said in a brief speech that came before he was declared the loser in Westview. "In a democracy, an election belongs to the voters, and the voters have spoken."

As for what lessons the New Democrats can take away from the defeat, Meili said one might be that the party has to show more vision.

"We can't focus as much as we do on the Saskatchewan Party," he said.

There will be a number of new faces in the next Saskatchewan legislature as there are 12 incumbents who are not contesting their seats.

Among the few incumbents to lose on Monday night was the Sask. Party's Victoria Jurgens, who fell to the NDP's Nicole Rancourt.