On Monday, the wraps finally come off at the Saskatchewan Legislative Building, unveiling a shiny new copper dome. 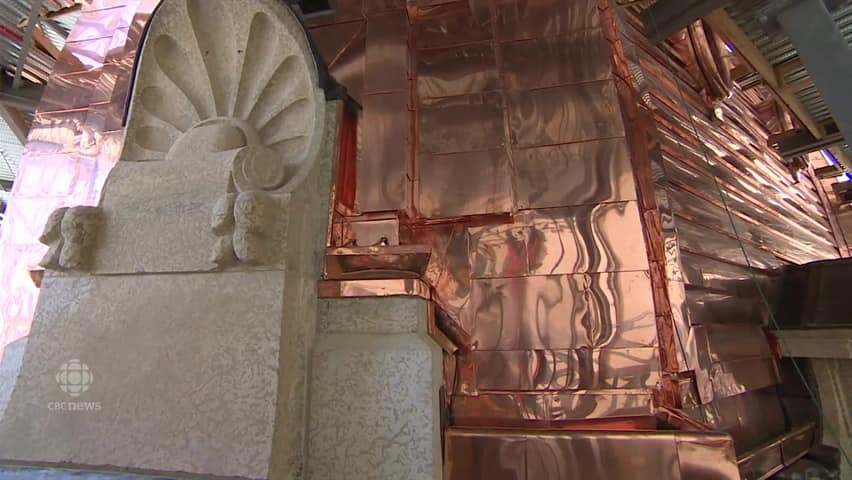 5 years ago
0:38
After nearly two years of work, we are seeing the shiny new dome on the Saskatchewan Legislative Building. 0:38

On Monday evening, the wraps finally came off at the Saskatchewan Legislative Building and a shiny new dome was unveiled.

For well over a year, renovations have been underway at the dome and the structure has been covered with scaffolding and white plastic. Some $21 million has been spent on the upgrade.

This evening, the public saw for themselves the shiny new copper dome that's been hiding under the plastic.

Details of the dome

For project manager Jerrod Keuler, the unveiling has been a long time coming, especially considering the amount of material and manpower exerted to get the dome restored.

For many, passing the Saskatchewan Legislature hasn't been the same after the original dark copper dome was covered making way for the restoration.

But on the construction site, Keuler said he and his staff have a whole new appreciation for the work required to build the original structure that's about a century old.

"We have this amazing structure to work off of and it just affords you comfort for one thing, the temperature control, the level of safety that we're provided here to work on in different levels of the building 170 feet up in the air," Keuler said.

"It's not an opportunity they had 100 years ago when they were working on it. They had quite a challenge and they did well."

One man that's seen everything from day one said he's excited to see and hear from the public once they see the legislature's new copper top. Steve Bata is the building manager for the Saskatchewan Legislature, he said the reason behind this extensive restoration and repair was due to the damaging effects of Saskatchewan's freeze-thaw cycle.

"Water gets in behind stone or copper and then it freezes and blows out stone and it was damaging our stone and concrete and damaging the copper and it was causing all kinds of grief," Bata said.

In the weeks leading up to the unveiling, Bata said everyone had been asking when the project would be finished, and when they would get to see the new finished product.

"It just shows that people really care about the building and want to know what we're doing and that the building is important to them," Bata said. "It's certainly nice to show it off and I hope everyone has a good look tonight."

Bata added the scaffolding surrounding the copper dome will start coming down as early as Tuesday and will take about a month before it's all cleared out.

Media got a sneak peek of the tour earlier today.

The actual unveiling of the new dome happened at about 8:45 p.m. CST.

There was also be an exhibition in the evening showcasing the dome project. That exhibit later will be located in the Cumberland Gallery, a room near the Prince of Wales entrance of the Legislative Building.

Lieut. Gov. Vaughn Solomon Schofield, Premier Brad Wall and other dignitaries were also on hand for the unveiling.
1 of 0
CBC's Journalistic Standards and Practices|About CBC News