Flags lowered across Sask. for victims of La Loche shootings

Flags were lowered at the Saskatchewan legislature and across the province at government buildings and schools to show support to the community of La Loche, where four people were killed by gunfire Friday.

Premier and other leaders in La Loche Sunday 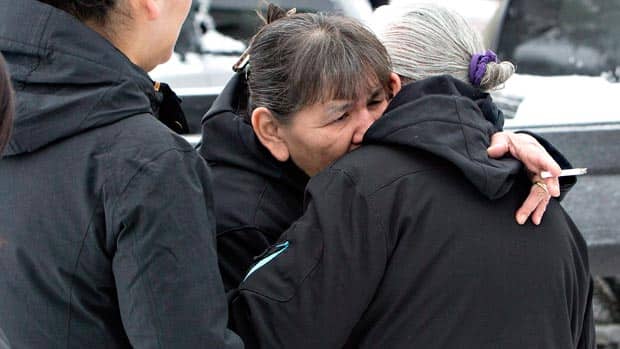 5 years agoVideo
4:11
Saskatchewan Premier Brad Wall will be in the community on Sunday, along with AFN Chief Perry Bellegarde and MP Ralph Goodale 4:11

Flags were lowered at the Saskatchewan Legislature and across the province at government buildings and schools to show support to the community of La Loche, where four people were killed by gunfire Friday.

"On occasions like this, we pray for peace that surpasses understanding for those who are affected by a calamity like that," Premier Brad Wall said Saturday afternoon in Regina. "An inner peace that exists where none should. A peace that sort of defies calamity and great loss."

Wall and other political leaders in the province were set to travel to La Loche Sunday to meet with members of the community, still reeling from the shootings which took place at a home and the local high school.

A 17-year-old boy was arrested at the La Loche Community School, surrendering to police who had rushed to the building shortly after 1 p.m. CST Friday in response to calls about an active shooter.

RCMP said the youth, who cannot be named, is facing four counts of first-degree murder for the deaths of two brothers, found dead in a home in La Loche, and two staff at the school, a teacher and an education assistant.​

Wall said he will be in La Loche with the federal public safety minister and MP for Regina-Wascana Ralph Goodale as well as Perry Bellegarde, chief of the Assembly of First Nations, who is from Saskatchewan, among other officials.

On Saturday, Wall pledged that support will be provided to the community to help people cope with the tragedy.

"Nothing will ever fully heal the loss of four lives and the wound inflicted on an entire community and really on an entire province," he said. "But ... the province is going to be there for the community."

Wall offered his condolences to the victims' families and spoke of how difficult it is for people to understand what happened.

"Every day in Saskatchewan we send our kids to school because it's a safe place for them to learn and to grow," he said. "And every day teachers and teacher aides, because they have a passion for those young people, also go to those schools to provide that fostering and that education.

"To have the lives and the futures of these students and staff cut short by this unspeakably horrible event is really simply unimaginable. It's unimaginable anywhere. Obviously for us in Saskatchewan, it's very hard to believe and surreal right here in our province."