'Catalyst for a movement': People around the world don ribbon skirts after Sask. girl shamed for wearing hers

A 10-year-old Saskatchewan girl's life has been brightened by the colourful ribbon skirts of women across the globe after she was shamed for wearing her own.

A 10-year-old Saskatchewan girl's life has been brightened by the colourful ribbon skirts of women across the globe after she was shamed for wearing her own.

Isabella Kulak, a member of Cote First Nation in eastern Saskatchewan, decided to wear her ribbon skirt to her school in Kamsack for a "formal day" in December.

"It's black with lots of white flowers and a blue, green and black ribbon on it. I like that my auntie Farrah made it for me and it fits me really well," Kulak said Monday in an interview with CBC News.

The traditional Indigenous clothing that Isabella and her sister wore represents strength, womanhood and identity, but her pride was stripped from her when an educational assistant at Kamsack Comprehensive Institute compared her clothing to that of another girl.

Chris Kulak, Isabella's father, says he could tell something was wrong when his daughter got home from school.

He says the educational assistant told the Grade 5 student that her mismatched skirt and shirt weren't fit for formal day. The assistant said Isabella should have worn an outfit similar to that of another student, who was wearing a store-bought dress.

"We found that very offensive, especially with the culture that's intertwined with the ribbon skirt and the sacredness behind it for Native women and for many women who participate in the skirt making and identify that as part of their heritage," Chris Kulak said Tuesday in an interview with CBC Radio's The Morning Edition.

"She was shamed for her traditional wear."

Ribbon skirts are traditionally worn for Indigenous ceremonies by women and girls, but the garments are also used to reflect support for causes such as Missing and Murdered Indigenous Women and Girls.

The handmade skirts pay homage to the teepee and would have been originally made from hide and decorated with hand-collected materials. As animal hides became scarce, women adapted and used ribbon and fabric they had traded with settlers.

The skirt has a different meaning for each person who wears it, but for many, the skirt is a symbol of resilience. In the 1800s, some Indigenous ceremonies and the clothing and ceremonial items associated with them were banned by the Canadian government under the terms of what was known as the Potlatch Law. Ceremonies wouldn't be legal again until 1951. 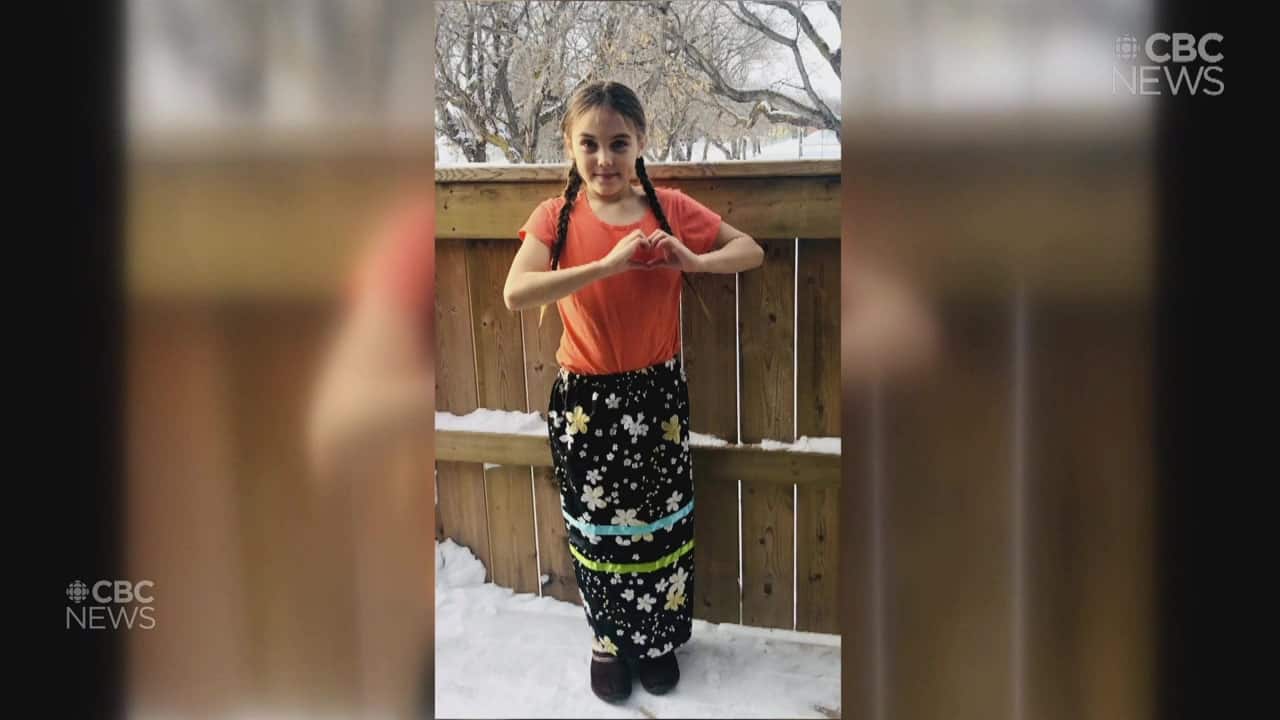 11 days agoVideo
2:23
A 10-year old girl has become a source of inspiration for Indigenous women across Canada and even around the world. Isabella Kulak was shamed by a school staff member after wearing a traditional ribbon dress but now she's pretty proud of what's come from that experience. 2:23

Details of Isabella's experience, which has been confirmed by a Good Spirit School Division investigation, were posted on Facebook by Isabella's aunt.

For weeks now, people from across Canada and from as far as Germany and Puerto Rico have been sharing photos and videos of themselves wearing their own ribbon skirts or shirts to show support for Isabella.

"She was a catalyst for a movement that had been waiting to come to the surface for a long time," said Chris. "We are overwhelmed with the positivity on Facebook."

Chris, who doesn't use Facebook himself, said the reaction online has turned the negative experience into a positive one for the Kulak family.

"I want to say thank you to all those people for their positive messages. That's how we help each other heal, is through positivity," he said.

A retired RCMP officer from Germany who once worked in Kamsack sent Isabella $100 after hearing her story, wishing her a merry Christmas. Even actor Nathaniel Arcand gave a shout-out.

"An actor from the … [TV show] my dad likes, North of 60, he said a couple things to me, that they're proud of me," said Isabella. "It's really cool to have an actor do that."

On Monday, the first day back to school after the holidays, a march was held to walk Isabella to school, culminating in a ceremony.

The Good Spirit School Division said the comment was problematic, apologized to the family and met with Chief of Cote First Nation George Peter Cote.

"Chief George, the education council from Cote First Nation and the young lady's family have been most gracious, understanding that a mistake was made, offering support, offering advice and forgiveness," said Quintin Robertson, director of education and CEO of the Good Spirit School Division.

Robertson said the division wants to do better in terms of reconciliation.

Chris said he doesn't want to see the educational assistant fired and hopes this can be learning moment.

As for Isabella, she said she was happy to see her cousins, kokums and friends come to support her.

Chris said Isabella is learning Saulteaux and has enjoyed learning how to say "sister" or "little one" in different languages, and writes each pronunciation down in a book.

"It's been a little bit of a roller-coaster for her. She's a quiet little girl that likes to learn and likes to play with her friends, and she realizes that she has a powerful voice even though she doesn't feel so big and mighty," said Chris.

"I told her that lots of people are listening and watching. She's been chosen by her people to speak for them. And it's a big responsibility for a 10-year-old girl, but she's rolling with the punches and she's absorbing it all very well."

The show of affection and pride for Isabella and ribbon skirts continues online.

Chris said the social media movement has been empowering and inspiring to Isabella and his other six daughters.

"All these people reaching out from all these different bands and areas of the world, just shows her how many aunties and sisters, kokums, she has all around the world that literally feel her pain, in terms of the shaming, and definitely share her pride in the garment," said Chris.

Samanda Brace is a Current Affairs Associate Producer. She got her start at CBC Saskatchewan in 2014 as an intern. Get in touch with her by emailing samanda.brace@cbc.ca

With files from Theresa Kliem and Janani Whitfield