According to Scott Doherty, executive assistant to the national president of Unifor, Regina police stopped traffic around the refinery at 11 p.m. CST Thursday at 9th Avenue and Winnipeg Street, and 9th Avenue and McDonald Street.

Doherty said the officers didn't allow any vehicles into the facility and told refinery security to remove fences that had been set up by the union.

As of 9 a.m. CST, Unifor had no picketers at the refinery site. Police were stopping traffic and Doherty said he wasn't sure whether the police would allow the picketers to walk through.

"They seem to want to arrest people as quickly as possible," said Doherty. 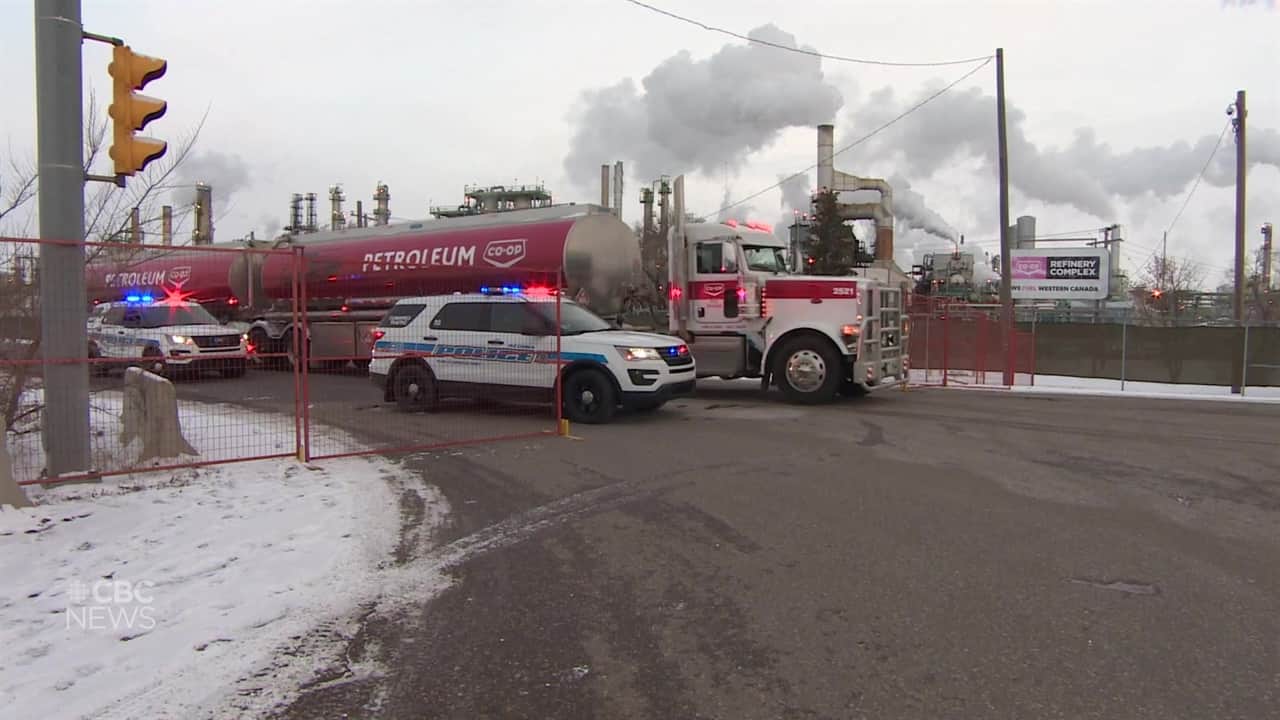 12 months agoVideo
0:46
Police allowed trucks to enter one of the entrances at Regina's Co-op Refinery on Friday morning. 0:46

Doherty was arrested Thursday and charged with mischief and disobeying an order of the court. Four other union members were arrested Wednesday, according to Unifor.

In a news release, the Regina Police Service said it was removing the barricades to make the area safe, in accordance with a court order from December.

Police said vehicle and pedestrian traffic would be stopped temporarily while officers took away anything that could be used to create an illegal barrier. Once that happens, picketers will be allowed in the area.

Any vehicles not related to the refinery's operation will not be allowed in.

A Court of Queen's Bench judge reserved his decision at a contempt of court hearing Thursday.

An original decision limited Unifor Local 594 workers to only block fuel truck traffic at the refinery for a maximum of 10 minutes. The union was fined $100,000 for breaching that order.

At Thursday's hearing, FCL argued that two union members should receive jail time, as well as issue a $1 million fine against the union.

Doherty said he was told by police that there would be no action until the court decision was released.

"Clearly that is not the case," he said.

"There still hasn't been a decision and they've decided to take it upon themselves to remove fences and give free access."

On Feb. 1, barricades at all of the entrances to the Co-op refinery were put back up after talks between locked out workers and Federated Co-op Ltd. broke down.

The barricades originally went up Jan. 20, in response to growing tensions between the union and the refinery.

FCL has called the barricades illegal and have demanded they be removed.

The union said the arrests show the Regina Police Services is siding with the refinery, although the police has taken pains to push their neutrality in the conflict.

Premier Scott Moe offered a provincial mediator in the conflict on Monday. The union said it will only cooperate if binding arbitration is brought in.

Roughly 800 workers at the Refinery have been locked out of their jobs since Dec. 5.