Regina's Neil McDonald got so irritated by a stranger complaining on the City of Regina Facebook page about her car being snowed in, that he found her address, drove halfway across town, and dug the car out to prove his point.

Neil McDonald claims he is not 'some kind of winter-loving, goodwill ambassador' 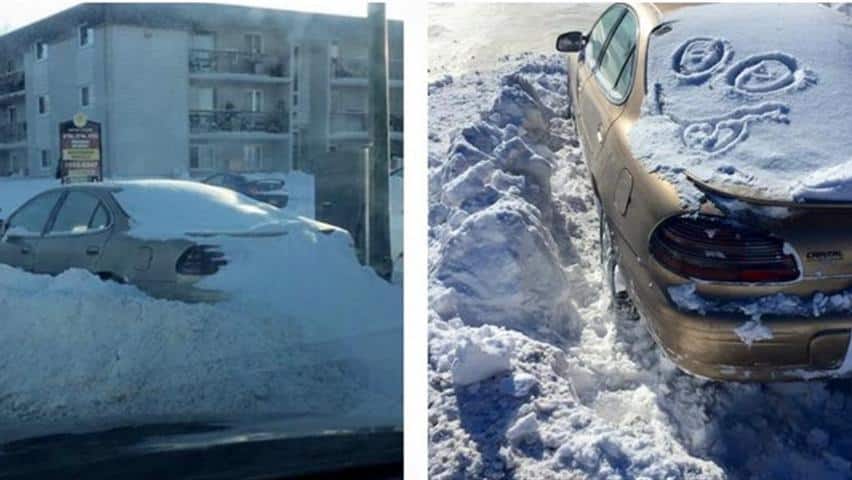 Online comments frustrate a lot of people, but few people have ever gone to the lengths of one Regina man to end a debate in the comments section.

Neil McDonald was perusing the City of Regina Facebook page when he came across a thread of people arguing over snow removal. One woman posted a picture of a car walled in by a city snowplow. A debate quickly surfaced about whose responsibility it is to move cars so city plows can do their job.

McDonald decided posting in the comments section was not enough. He admits he "internet creeped their address, drove across town to their place, and dug them out."

He then posted the evidence.

"I was taken aback by some of the things these people were saying," he said. "Some people were suggesting that I was Father Winter, or some sort of yeti messiah. One guy even wrote that I was like Batman with a shovel — all very flattering but couldn't be further from the truth."

'Winter sucks without a doubt, but just do it. Dig out your car, your neighbour's, but don't feel like you have to enjoy it."-—Neil McDonald

"Everything that I love — sunshine, bicycle rides, picnics, bare feet — are all lost to me for six months of the year. And by me suggesting online that people just get out there and dig each other out after a snowfall, the last thing that I wanted to suggest is that we enjoy it. Winter sucks without a doubt, but just do it."

McDonald said his actions have more to do with changing the topic than goodwill.

"When I woke up the other day, I wasn't planning to champion any causes," he said. "Despite my last three New Year's resolutions being to not read online comments, I opened up Facebook on my phone and a friend's comment immediately sucked me into this thread about the plowed-in car."

McDonald said he posted a few times about how we all need to be neighbourly, roll up our sleeves and help dig each other out.

"That should have been it, but some folks didn't think that they should have to shovel the small amount of snow that is left after a plow."

Better things to fight about

McDonald said the main reason he dug out a stranger's car was to get people thinking about issues he deems more important.

"I wanted people to stop filling the City of Regina's Facebook page with posts about snow so that we can all go back to the important things like arguing online about the terrible funding model they decided on for the new stadium," he said.

"I just couldn't let everyone go on thinking that I was some kind of winter-loving, goodwill ambassador".