The University of Regina says it won't cancel or censor a lecture by renowned Canadian poet George Elliott Clarke simply because he edited poetry written by convicted killer Steven Kummerfield, who beat an Indigenous woman to death 25 years ago.

The University of Regina says it won't cancel or censor a lecture by renowned Canadian poet George Elliott Clarke simply because he edited poetry written by convicted killer Steven Kummerfield, who beat an Indigenous woman to death in Regina 25 years ago.

The lecture, scheduled for Jan. 23, and a lack of consultation with Indigenous groups in advance of it, has now become so contentious that it has triggered resignations, calls for a boycott and pleas from some faculty and student groups to cancel or postpone the talk.

In 1995, two white, middle-class, young men — Steven Kummerfield and Alex Ternowetsky — lured Pamela George, 28, a single mother who occasionally sold sex to help support her children, outside the city, beat her to death and then bragged about it.

The two were convicted of manslaughter and sentenced in 1997 to six and a half years in prison.

The case is seen by some in Saskatchewan as emblematic of the racial tensions between white and Indigenous communities and class inequities in the province.

Only learned of killer's past 4 months ago

Kummerfield served half his sentence and was released on full parole in November 2000 and now lives in Mexico City. He has changed his name to Stephen Brown and is a published poet.

Since 2005, he's had a working relationship with Clarke, who is a professor of English at the University of Toronto and has edited poems and books published under both of Kummerfield's names. The celebrated, Nova Scotia-born poet says he considers Kummerfield a good friend and only learned of his violent past four months ago.

Clarke, 59, is a former poet laureate of Canada who has written more than a dozen collections of poetry as well as drama, two novels and literary criticism and received multiple honours for his work, including a Governor General's Literary Award and an Order of Canada.

He said it's "kind of immaterial" whether or not he knew of Kummerfield's crime when he began working with him because he may still have chosen to work with him based on an appreciation of his art.

"I admire lots of poets, including many who are now long gone, who committed crimes of one sort or another … but who still left behind considerable legacies of excellent poetry for poetry-lovers to enjoy," Clarke said in an interview with CBC News.

Clarke said he hasn't decided which poets he'll discuss when he gives the Woodrow Lloyd Lecture later this month and that he "may or may not" read a poem by Kummerfield.

His talk is titled "Truth and Reconciliation" versus "the Murdered and Missing": Examining Indigenous Experiences of (In)Justice in Four Saskatchewan Poets, but Clarke says he hasn't written it yet.

"Morally, I don't have any necessary qualms about reciting something [from Kummerfield] if I feel ... that it belongs in the context of this talk," Clarke said. "In no way, shape or form would this be about mitigating or alleviating the gravity of his offence."

He says he won't pander to "so-called intellectuals" who want to send out a "lynch mob" just because he had a working relationship with a convicted criminal.

The university's Faculty of Arts dean, Richard Kleer, says the institution seeks to encourage "open, civil and robust discussion on controversial issues" and that may include hosting people who have controversial ideas or associate with controversial individuals.

"The selection committee may have made a different choice had it been aware of the relationship [between Clarke and Kummerfield] in advance, but that point is moot now," Kleer said in an emailed statement to CBC News.

"The faculty will stand by the invitation and looks forward to hearing Clarke's strong message against violence and racism."

'How am I guilty by association?'

Clarke says he has no plans to discuss any specific cases of murdered or missing Indigenous women in Saskatchewan but rather "the larger philosophical question of the responses of poets, or non-responses of poets, to questions of grave social consequence."

He accused people who are opposing his lecture of trying to "weaponize" his talk "to exercise their vindictive feelings" against Kummerfield.

"How am I guilty by association?" Clarke said.

WATCH | Tyler Stuart tells the court what his friends told him about the night Pamela George was killed: 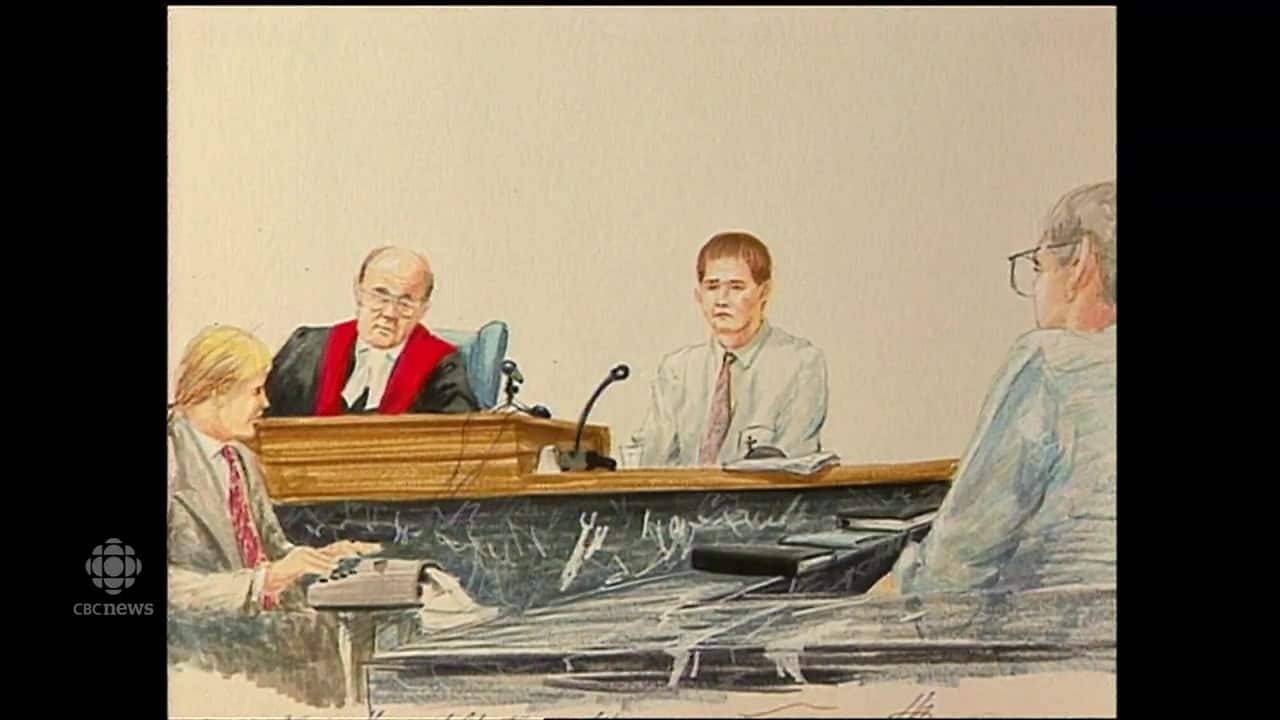 Kummerfield was a 19-year-old rising basketball star at the U of R when he killed George.

At his trial, he admitted that he picked up a prostitute from Regina's inner city while Ternowetsky hid in the trunk of the car.

Both men admitted they drunkenly beat up George, but they maintained that she was alive when they abandoned her on the city outskirts.

The Indigenous woman's brutal death and subsequent murder trial sparked allegations of racism against the two men, the judge and the jury.

Tyler Stuart, a friend of the pair, testified that Kummerfield told him they "drove around, got drunk and killed this chick," and that Ternowetsky said, "She deserved it. She was an Indian."

The judge in the trial, Justice Ted Malone of the Saskatchewan Court of Queen's Bench, was criticized at the time for comments he made to the jury, telling them to consider that George "indeed was a prostitute" when assessing whether or not she had consented to sex with the men.

Calls to cancel or postpone lecture

The U of R Faculty Association's equity committee, which lobbies for marginalized groups on campus, voted unanimously on Dec. 19 to recommend to the committee that selects the speakers for the annual Woodrow Lloyd Lecture that it cancel, or at least postpone, Clarke's talk.

"There is not sufficient time to ensure that this [event] has the potential to be a healing or restorative or in the spirit of reconciliation event," Claire Carter, a gender studies professor and acting chair of the equity committee said.

She said members of the committee want the university to carefully respond to concerns from Indigenous faculty members and students rather than just paying lip service to the process of "Indigenization" on campus.

Indigenization involves consulting with an Indigenous advisory circle and including Indigenous voices, critiques, scholars and materials in all U of R classes and campus activities.

Such consultations didn't happen in the case of the Clarke lecture, sources familiar with the matter said, and it's causing friction on campus.

"It really isn't for George Elliott Clarke or the committee to decide if it's going to be a healing event. That actually needs to be decided by members of the Indigenous community," Carter said.

Two professors — Emily Eaton and Jeff Loucks — confirmed that they have resigned from the lecture's selection committee over the university's response to their concerns.

Brenda Dubois, who works as an elder adviser at the university, said she wants Clarke to rule out any works by Kummerfield.

Including readings from his work in the lecture would be extremely hurtful, Dubois said.

"Why is he still wanting to leave that controversy in the air, that, 'Yeah, I might read it, I might not read it'?'" she said. "I'm beyond words right now."

Clarke said those getting worked up about his association with Kummerfield should "just relax" and take the event for what it is: "An academic talk on a serious and grievous matter of social importance."

As a black academic with Cherokee and Mi'kmaq heritage, Clarke says he's qualified to approach racial issues with seriousness and sensitivity.

After Clarke learned of his friend's crime, he gave a lecture in November titled Must Poets Always "Hang" with Murderers?: A Meditation on Poetics and "Justice" at John Cabot University in Rome.

He spoke about his relationship with Kummerfield, without naming him, according to an article about the lecture posted on the university's website. It quotes Clarke as saying he was "wholly unprepared" when he found out his good friend was convicted of manslaughter in the death of an Indigenous woman.

"My friend ended up serving only three and a half years because of a sexist and racist judge who decided that the victim, an Indigenous woman, a sex worker, partly deserved the rape and death at the hands of two young white men," the article quotes Clarke saying.

According to the post, Clarke argued that while his friend's crime was unpardonable he could be seen as both a convicted killer and a great poet.

"My friend … is an incredible poet.… As now he is in his 40s, he is a fairly kind man who has paid his debt to society, as the saying goes, and so should be left to live his life."