A group of people gathered at the Saskatchewan Legislature Sunday to deliver a petition asking politicians to stop the use of a prayer before the start of daily business in the assembly.

A group of people gathered at the Saskatchewan Legislature Sunday to deliver a petition asking politicians to stop praying before the start of daily business in the assembly.

About 20 people held a short demonstration, with a few signs, before handing their petition to a security guard for delivery to the premier's office Monday.

"I'm here to support separation of church and state," Terry Chadwick, one of the people at the demonstration, said. "The government is for all people of Saskatchewan and ... [the daily prayer in the Legislative Assembly] is exclusionary to non-Christians in the province."

A Regina branch of the Centre for Inquiry, which advocates for secularism, has been campaigning for a change, especially following a Supreme Court of Canada decision concerning the use of prayer at meetings of municipal councils.

"The government should be neutral in matters of religion," Chadwick said.

He said he is a strong advocate for freedom of religion in society as well as "freedom from religion".

"Religious beliefs should not be imposed on any member of society but you're free to practice your own religions," he said.

Other people at the demonstration agreed.

"Government should be inclusive of everyone," Dusti Hennenfent, who has pressed the same issue in the past in relation to schools, said. "Saskatchewan is promoting itself as an inclusive, progressive province ... and I don't think that opening up with a very specific Christian prayer represents that." 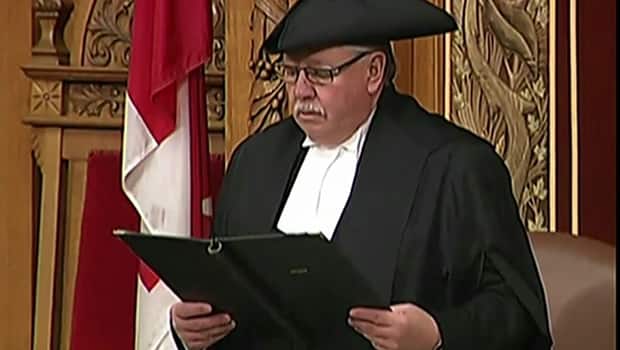 The opening prayer used at the Saskatchewan Legislature

5 years ago
0:34
The Speaker reads the opening prayer used at the Saskatchewan Legislature. 0:34

"We've elected these officials to represent everybody, not just one specific group," Angela Reddekopp said. "I hope this sends a clear message that it's time to wake up and realize that there's other people with other beliefs."

No complaints, Brad Wall said in 2015

When the issue arose in 2015 following the Supreme Court ruling, Saskatchewan Premier Brad Wall told reporters he had not received any complaints about the practice at the legislature.

He also said the prayer used in Saskatchewan was general in nature.

"Our prayer asks for continual help," he said in April, 2015. "If any group of people need that help it's elected people, politicians of the country."

The group behind the petition also shared a February 2016 letter from the opposition NDP addressing the issue.

"You make a very compelling argument," MLA David Forbes said in response to concerns raised about the use of an opening prayer in the legislature. "I will see that this matter will be raised at our next caucus meeting following the election."

The group behind the petition is also calling for changes to the Christmas greetings given by Premier Brad Wall. The group claims Wall's annual message signals "Christianity as superior to other beliefs and non-belief."

With files from CBC's Dean Gutheil and The Canadian Press